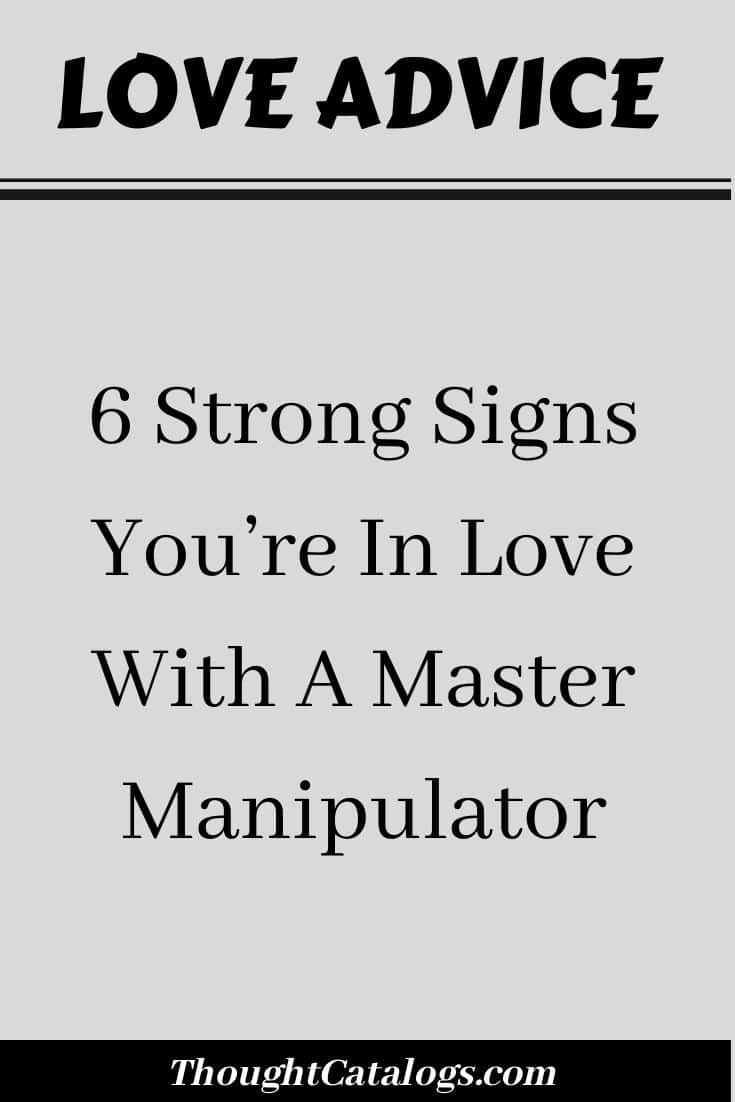 We have all been manipulated before in our lives—it’s part of human nature.

Manipulation in a relationship is even more destructive, as it can be very effective and can even risk your own mental health. Because of that, it is very important for you to recognize if you’re being manipulated in your relationship before it becomes too late.

It is not as easy as you might think because master manipulators are often typically very skillful. They start out with subtle manipulation and raise the stakes over time—so slowly that you don’t even realize it’s happening.

But if you know what to look for, over time you will be able to uncover their manipulative tactics and these are the most important signs to look for:

1. You’re apologizing for the things you’re not guilty of

You’re apologizing and then suddenly thinking: “Oh, wait, I’m not the one who messed up. Why am I apologizing?”. The worst part is that this is not the first time, and it seems not the last one either.

A master manipulator will trick you into believing that you’re the guilty one. No matter what he did—it’s always someone else’s fault, usually yours.

If he did you a favor, you feel obliged to repay him for his sacrifice—over and over again. Is this really how a relationship works? Is this how it is to be in love? No, it’s not.

Even if he doesn’t say that he expects you to do something in return, he will mention it whenever it suits him. When you two have a fight, you will be always reminded of the time he did something for you and this will be one of his best arguments.

He is short-tempered and you never know what frame of mind he’ll be in. You never know when he can lash out furiously, and you live in constant fear of that.

His mood is inconsistent and your mood becomes influenced by his and even reliant on his.

4. You caught him in lies too many times

If he is a skilled manipulator and you caught him somehow in a lie, imagine how many times he lied to you without you noticing that?

He will tell you everything you want to hear, and he will make sure that you believe in that. The only downside is that his actions speak louder than words and he’ll be exposed sooner or later.

5. Change is not an option

Sometimes you know that he’s manipulating you, but you know he is a good guy and don’t want to lose him. You know that if he changed only a bit there would still be hope.

Well, that won’t happen. It won’t happen because he does not want to change. He doesn’t see the immorality of his actions and he will trick you into believing the same.

6. He knows all your buttons and he won’t hesitate to push them…all

You were so happy when you two just started dating because he was so interested in your life. He wanted to know so much about you and wanted to be involved in everything.

It seemed like he really cared and wanted to get to know you. A master manipulator wants exactly that, but with the purpose of quickly finding your weak spots, and using them if needed.

His awareness of your emotions is off the charts, but he uses it to manipulate you, not to make you feel better.

15 Modern-Day Meet Cutes For Dating In The Digital Age

Here Is Your Zodiac Sign’s Comprehensive Horoscope For May 2021

Why You Fall For The Wrong Men Or Boyfriend, Based On Your Zodiac Sign