Love is a two-way street. Both partners need to give as much as they expect to receive if they are adamant to make it work. And if it is real love, that shouldn’t be a problem. Not one bit.

But when it comes to narcissists, things are a bit different.

What you and I consider love, a narcissist sees as an opportunity to lure yet another victim into his web of charming, manipulative lies and fake promises.

They don’t see love the way we do, and they aren’t capable of feeling it as deeply and profoundly as we are.

They can fake it, and they are damn good at it. And that’s the scariest thing of them all.

It sucks that it often comes this far. It sucks that your hopes and dreams get crushed due to some manipulative, charismatic and charming man who is nothing but a toxic narcissist in disguise.

It is so unfortunate how far these men are willing to go and how they are able to get away with it.

And for what? To boost their already overly-inflated ego and feel in control. To use you and every victim which follows as their punching bag.

In a narcissist’s mind, love is but a means to an end. It is a perfect opportunity to manipulate, lie, deceive and demean. It is a game of sex and power. And they always win, don’t they?

When a narcissist tells you he loves you, he is only being manipulative and careful.

His words are as empty as his inability to actually feel them. To him, it means less than nothing. And that is why it hurts so much.

Knowing that you fell for the fake words of a controlling, sociopathic narcissist can be extremely discouraging. So here are 5 ways to know if you’re experiencing real love or if it’s all just a narcissistic illusion.

1. If it was real love, it would make him happy seeing you happy

Plain and simple. People who genuinely care about you jump for joy when good things happen to you.

They just can’t help it. But when it’s an illusion, they will try to appear happy and proud, but you’ll be able to tell that it’s fake.

They will put on a wide, fake smile, but their eyes won’t be able to hide their emptiness.

Their eyes will tell you everything you need to know. There, you will see the void, emptiness and manipulation.

He will try to fool you, but if you look really closely, you’ll be able to tell the difference. And at that moment, you’ll know for sure what you’ve been denying all this time. It’s not love… just a carefully planted illusion.

2. If it was real love, treating you kindly would be his priority

When you love someone, you treat them well. You wish them well, and you do everything in your power to preserve their well-being and happiness.

But when it’s nothing but an illusion, things are way different. He will pretend he is doing something for your own good, but it will hurt you and make you feel wrong.

Even though he will assure you that he means well, it won’t feel that way.

His words will be one thing, but his actions will be something completely different.

He will constantly do things that harm your well-being and mask it with his words as a necessary thing for you to grow and evolve. His words will be kind, but his actions will be mean and demeaning.

3. If it was real love, he would treat your relationship as a partnership

If his love was sincere, he would consider you an equal. He would never make you feel like you owe him anything.

You would never need to feel like less of a person because the partnership would be thriving on your mutual love and effort.

But when you’re living in a narcissistic illusion, he’s the one in control. He’s the one making the decisions, and he’s the one with the upper hand. It’s never you, and deep down, you know you’re being played.

He will try to make it seem like your opinion matters, and he might even ask for it. But when push comes to shove, his actions and his words are the only thing that matters.

You can say what you want, but it goes in one ear and out the other. Nothing but an illusion and make believe.

4. If it was real love, he would never ask things of you that make you feel uncomfortable

If he really loved you, he would damn well respect you and your wishes. He would never ask you to do anything that makes you feel uneasy and uncomfortable. He would respect you too much to put you in these horrible positions.

But when it’s an illusion, he will do whatever the hell he wants and make you believe that’s what you want as well.

He will be so charming and convincing that you’ll actually believe him.

But deep down, you know in your gut what feels okay and what makes your stomach churn.

If your guy causes the latter, you’re living in an illusion that is slowly making you sick.

5. If it was real love he would never make you choose between him and your family and friends

If your man really loved you, he would know your loved ones are an extension of you.

He would love them and accept them as part of who you are. And it would be his pleasure doing that.

But living in a narcissistic illusion means slowly losing touch with those closest to you.

The guy is slowly alienating you from your support system and making you believe you don’t need them in the first place.

In his mind, he is the only one you’ll ever need. And he won’t be happy until he has distanced you from every single person you cherish.

That is his ultimate goal, and he won’t stop until it’s done. So MAKE him stop by realizing what he’s doing, and choosing your family over a narcissistic egomaniac.

That will be the best decision you will ever make, and it’s not even close. Choose yourself, love yourself, and ALWAYS be your amazing self. Everybody else is already taken. 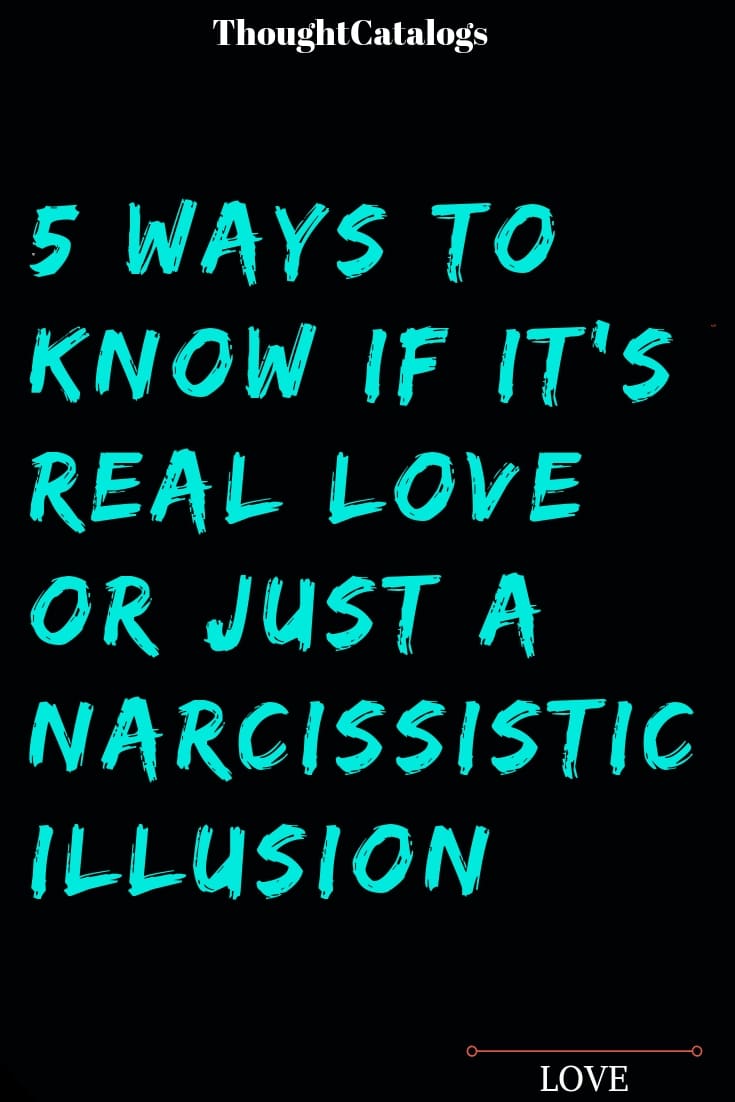