Facebook Twitter LinkedIn Tumblr Pinterest Reddit VKontakte Odnoklassniki
Don’t worry, darling. We all feel the same way. It’s not unusual to still have feelings for someone with whom you’ve spent a certain amount of time. You still remember his scent, his touch, his voice, the sound of his footsteps and so on. But you have to understand that these are just the leftovers of his presence and they have nothing to do with you still having affection toward him. I know it is confusing at the moment but these signs will eventually subside. Whatever you do, don’t let them overwhelm you or confuse you to start believing that you’re still in love with him. These are the most common deceiving signs that may confuse you to think that you’re still in love with him (but believe me, you’re not):

1. You don’t want him to meet somebody else

This is the biggest misconception and it occurs at the very start of the break-up. You think you still love him just because you don’t want him to be with somebody else. You still have that part of you saying that you’re his and only his and him being with another woman is cheating on you. You still have these feelings that you’re together but in reality this is not the case. This also means that you don’t want him to be happy which is the biggest evidence that you’re not in love with him. Real love means putting other people’s happiness before yours. This means if the person you love is happy, you will be happy as well and vice versa. So, your wishing for him to be forever alone or in a miserable relationship is far from being in love.

2. You’re constantly calling and texting him

This one may seem weird because we all think if a person is constantly calling and texting someone then she’s madly in love with him. Unfortunately, this is not true. There’s a difference between being madly in love and an obsession. An obsession starts when you reach the level where he constantly ignores you but you keep calling and texting him with no intention of stopping until he answers you. But if he wanted to answer you, he would have done so a long time ago. If you really love him, you will respect his wish to be without you. Constantly calling and texting him is a desperate move and you know you’re better than that.

3. You expect him to call or text you

Expecting him to call or text you is another version of obsession. So, you expect him to call you but you refuse to call him yourself? The only logical reason why you would want such a thing is that you want to prove something to yourself. Perhaps you want to prove that you still own him or you’re doing this for self-validation purposes. Evidently, this has nothing to do with love; it is a matter of dominance in a relationship and other psychological factors as well. If you were the one who was dominant in the relationship, this could be your subconscious way to preserve your status in order to feel good again. Don’t do this. You are a self-sufficient, amazing woman and you don’t need a man to call you in order to prove what I’ve just said.

4. You get mixed feelings when you see him

Whether you see him on social networks or in the real world, you have to know that it is completely normal to get mixed feelings about him. This doesn’t necessarily mean that you’re still in love with him. You’ll most likely get the same feeling even five years after the break-up and this is like a side effect that follows everyone who’s in the same situation. You have to know that you cannot simply forget a person after ten days. These mixed feelings you get have nothing to do with you being in love; they are just your body’s reaction to certain stimuli, e.g. when you were with him, your body learned to react a certain way and now it just imitates the same reaction without any specific reason.

5. You can’t stop talking about him

If you can’t stop talking about your ex, it means you haven’t resolved the situation in your mind. You still need to process what has happened and to do some mind cleansing in order to accept it. You’re not in love if you can’t stop talking about him because it means you’re not ashamed to talk about him. When you’re ashamed to talk about your ex, it means you’re ashamed of the neglected feelings toward him or you’re subconsciously fighting to forget him but don’t want anyone to know it. So, when they ask you: How do you feel? You simply reply: Oh, I’m doing fine… If that is the case, you could still be in love with him. But you’re certainly not in love if you’re constantly talking about him to make you feel better about yourself or to prove something to yourself and others. It means you’ve accepted the situation but you only need some time to digest it. 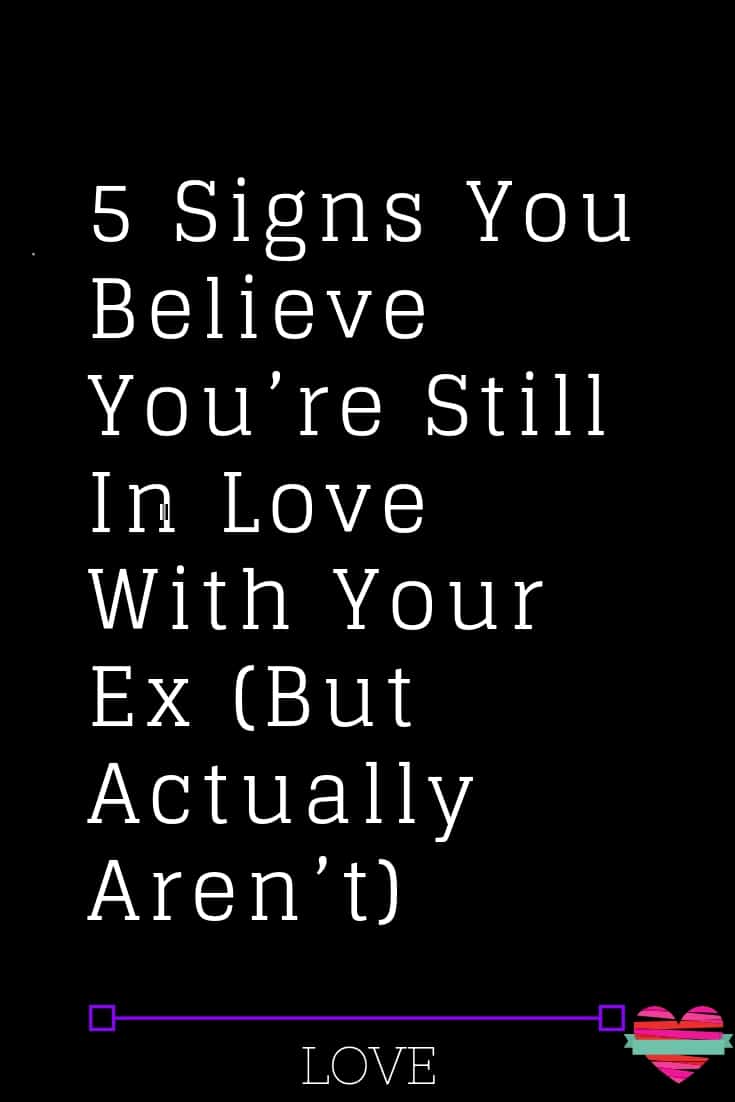 Don’t Let Your Past Mistakes Ruin You For Love