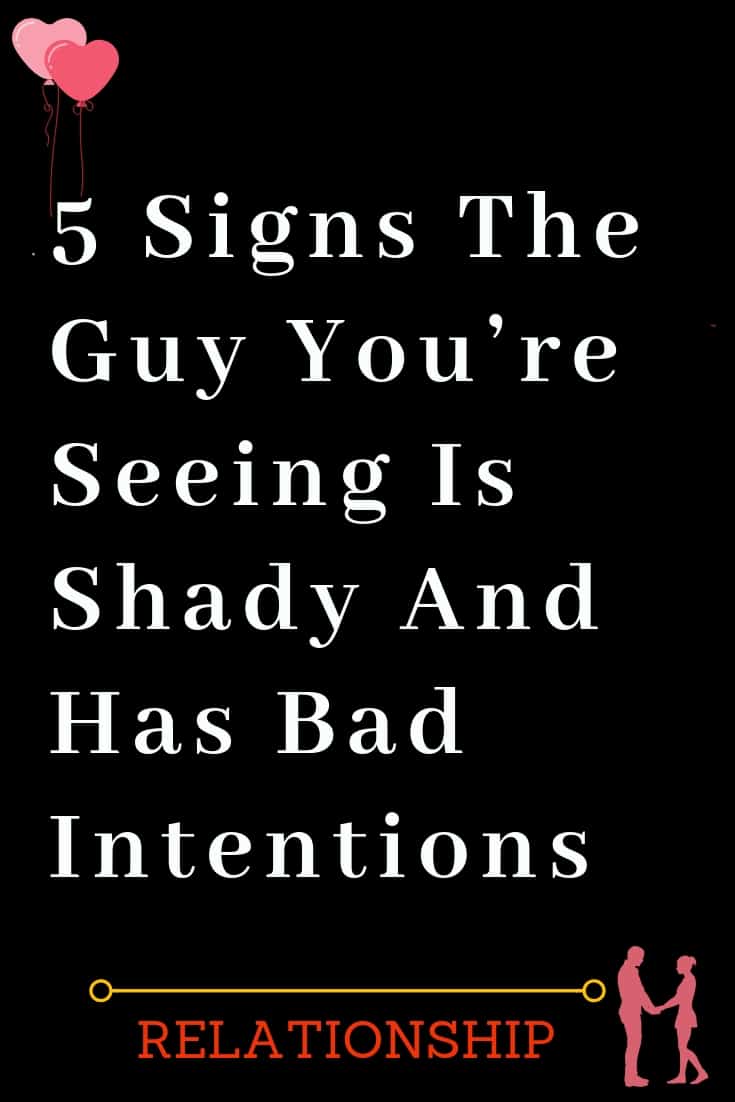 At this point in your life, you simply no longer have time for players, cheaters or toxic men.

You’re sick and tired of playing games and wondering at what point this next guy is going to break your heart. You just want love, effort and commitment.

But why is it so hard to find a good guy these days? Have they all been swallowed by the sea? At times, it truly feels that way.

But if there’s any consolation in all of this, you can at least nip it in the bud with the next guy, before he gets to break your heart.

You can’t change toxic people and make them change their bad ways but you sure as hell can see through their bullshit in time and get the hell out before it’s too late.

I know it’s not a lot but it’s something. Guys rarely change but luckily the same goes for their shitty habits and tendencies.

So I’ve come up with foolproof ways for you to see if you’re dealing with yet another asshole and help you make a run for it if need be.

So let’s start. Here are the 5 most obvious signs the guy you’re seeing is up to no good and you should walk away right now.

1. He appears to be emotionally empty

At times, it feels like you’re dating an actual robot… He seems void of any emotion and doesn’t appear to be bothered by it.

Nothing can really get a reaction from him and he is so indifferent to anything you do.

Let me let you in on a little secret. People who appear this way are nothing but players who are simply trying to hide their shitty actions by not letting any emotion or reaction to the surface.

He is protecting himself and his lies by acting so aloof. Luckily, you’re all caught up now and you can safely say, “Next!”

2. His reputation precedes him

You’ve heard stories about him on occasion but you haven’t really given them much thought.

It’s easier to ignore the bad signs than to accept that you’re dealing with yet another loser with bad intentions.

But if it’s true that you’ve heard some stuff about him from more than one person, then it’s probably the truth.

Players have a reputation and it’s hard to get away from it. If he’s known to hit it and quit it and treats girls like commodities, you best start believing it.

Unless you want to become just another notch in his belt, open your eyes to all the bad signs and choose to believe them.

It’s highly likely that it will happen to you, so I suggest you get ahead of this and don’t let him hurt you any more than he already has.

3. He seems to be able to lie with such ease

You’ve caught him in a lie many a time but he always knew exactly what to say and convince you of his story.

He didn’t even flinch. He is so good with words and it didn’t faze him at all when you confronted him with his lies.

That is because he has become a master of his craft. It takes years of experience to become as good and convincing as he is.

It doesn’t just happen overnight. People get nervous and anxious when they’ve been faced with their wrongdoings, so the fact that he didn’t says a LOT.

It all starts with a little white lie. And when he sees how easy it is to blind you with his BS, he’s only going to become more crafty and more eager to push the limits. Don’t let him.

4. Most of your relationship is of a physical nature

He doesn’t appear to be interested in you outside of the bedroom. You don’t really talk much but not because you don’t want to.

It’s because he never seems to be in the mood for a conversation. He is very convincing when he wants sex but when you seek more, he becomes another person.

A relationship that revolves merely around sex and zero emotional connection is doomed to fail.

When one partner is severely emotionally neglected and the other one doesn’t even care to remedy it, it’s a sign of a toxic relationship.

You are not his puppet and you are more than what your body can offer. Don’t let good sex leave you with him.

He is merely using you and if you don’t sense he cares about you as a person, you’re probably right.

5. He doesn’t want you to meet his family and friends

Every time you suggested that you meet anyone in his life, he was strictly against it.

Either they’re not in town or they’re busy or it’s simply not the right time. It is always something and he doesn’t seem to be running low on excuses.

This one’s a no-brainer. If you were important to him and he cared about you at all, eventually you would meet some of his family and friends.

That’s just how relationships work. But when he’s constantly against it, all you can presume is that he’s not really seeing you as a part of his life.

You are somebody he spends time with but when it comes to serious matters, you’re suddenly invisible.

Don’t put up with this for much longer. If he keeps you from his life—walk away from his.

There’s a reason he’s keeping you from his family and it’s probably not a good one. Leave and don’t look back.

These 5 Zodiac Signs Will Be The Luckiest In 2019

Girlfriends Ranked From Chill To High Maintenance Af, According To Their Zodiac Sign

This Is How You Know He Isn’t That Into You, Based On His Zodiac Sign

The Most Positive To Negative Zodiac Signs, Ranked

Top 10 Fantastic Reasons Why You Should Absolutely Date A Gamer

ThoughtCatalogs - October 4, 2019 0
Why Dating A Gamer Is Actually The Best? If you’re dating a gamer guy or are simply wondering what it would be like to date a gamer in real life,...