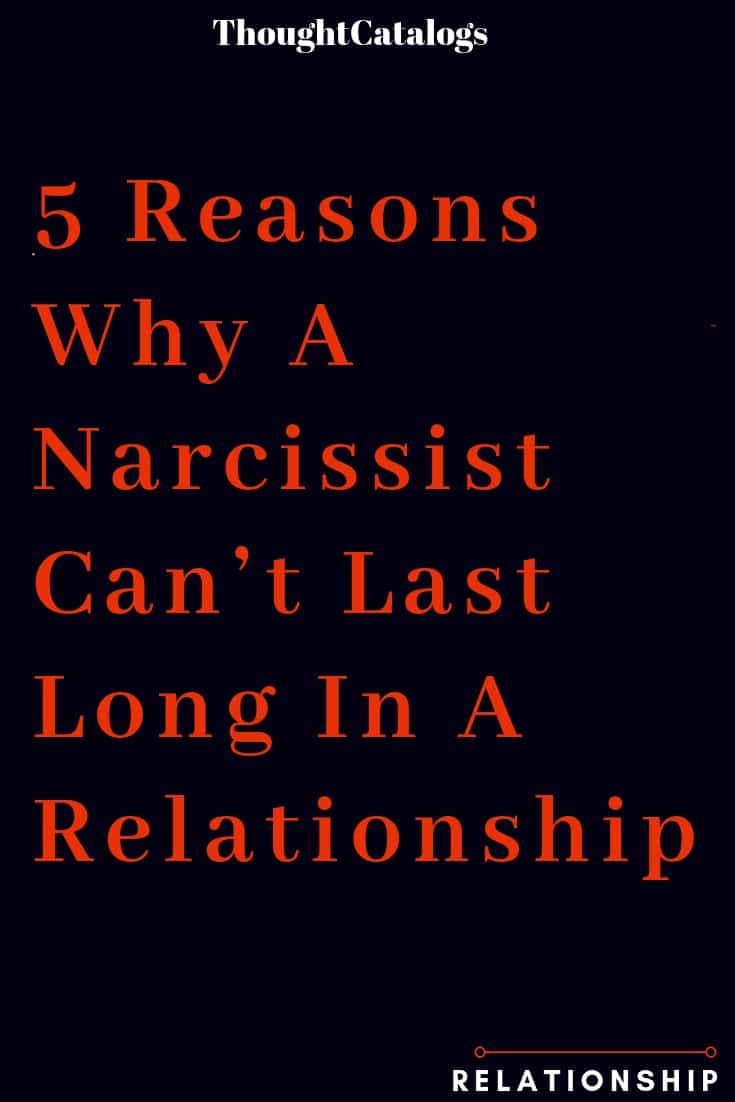 Among a multitude of undesirable attributes, all narcissists have yet another thing in common. Whether they are aware of it or not, they are simply not made for long-term relationships.

In their twisted mind, there is nothing they can do wrong. If you asked your narcissist, he would probably insist that his relationships with his family, friends and co-workers couldn’t be better. When in fact, that couldn’t be further from the truth.

A narcissist’s inability to empathize with other people and understand where the majority of their emotions come from makes it extremely challenging for them to form long-lasting, healthy relationships.

They don’t see it the way other people do but they lack in the emotional department and since they are unable (and unwilling) to go through the daily motions of the average Joe, they simply cannot last in a relationship.

All narcissists have a similar MO. Their behavior can be predicted easily because they do their thing on a loop in each and every romantic relationship.

And that right there is the main cause of their romantic downfall. (Ironic, isn’t it?)

Due to this peculiar occurrence, it’s easier to understand exactly why they cannot form relationships that can actually stand the test of time.

They are the ones standing in their own way and if it wasn’t for their manipulative behavioral patterns, their luck in love would perhaps increase!

But luckily for all women out there, they stick to their agenda and here is exactly how they sabotage their romantic endeavors.

1. Narcissists treat people (and their romantic partners) as objects

As we are all already familiar with, narcissists cannot feel empathy, therefore have zero regard for other people’s well-being.

They cannot fall madly in love the way you, I and the rest of the world can. They aren’t wired that way.

What they can do is fall for a person in an extremely unhealthy, obsessive manner, let their delusion of love overcome them and within days return to their ‘normal’ self who treats people like objects.

2. Narcissists go through life with their head in the clouds

They have their own particular ideals that are quite detached from reality. They aim too high and expect a lot while willing to offer nothing.

They seek a partner who will purely serve as a cute accessory on their arm. They want somebody to fulfill their every need, believing they are fully entitled to it.

They don’t care what you want. The only thing that matters is what they have imagined in their head and working on achieving it (no matter how delusional or far-fetched it is).

They don’t put their trust in anyone’s hands but their own. They see it as a weakness because they have never let themselves depend on anybody.

Unlike other people, who trust their nearest and dearest, narcissists don’t have that luxury.

They don’t understand how people give away their trust that easily as it can backfire within seconds. And this is why their relationships end way too prematurely.

Their inability to trust their partner makes it hard to stay romantically involved, as trust is the main ingredient of a healthy, happy love affair!

4. Narcissists are overly controlling and manipulative

Narcissists always have to be in control of the people and situations they put themselves in.

Never do they allow themselves to be left out of the loop having to put the pieces back together because they are always on top of things.

And this, along with their need for manipulation, makes it hard for them to be in a committed partnership with anyone.

They will do everything in their power to make themselves appear in the best light and throw you under the bus if need be. Their need for perfection trumps anything else.

If they don’t have their way, they can turn violent just like that. Narcissists are known to be abusive to their partners and don’t even recognize it as bad behavior. To them, you provoked them, therefore you got yours.

If their partner doesn’t please their every need, they may resort to domestic violence. And if your narcissist possesses any of these problematic traits, the chances of him turning hostile are higher than in any other situation:

If you have answered yes to the majority of these, it is probable that things may take a turn for the worse and sooner than you think. Don’t let your fear keep you with him. If he hasn’t shown signs of major aggression yet, take it as your chance to leave and never look back.

What To Expect In The Month Of May 2020, Based On Your Zodiac Sign

THIS IS HOW YOU MADE ME BELIEVE IN FOREVER AGAIN

How Astrology Can Improve Your Love Life In 2022 Year

What Kind Of A Woman You Are, Based On Your Zodiac Sign