1. Someone who will support her financially

“Even if there are girls who always try to find a guy who is wealthy, many independent women nowadays don’t need a man to support her financially. Women are much stronger nowadays and they can find ways to get even more money than some guys.” Sarah, 26

2. Someone who will always be there for her

“I know that guys think that we are more emotional than them but I would disagree on that. I don’t need someone who will be with me 24/7 and who will suffocate me with their emotions. I want to have my own life without my partner knowing every single thing I do.” Rachel, 33

3. Someone who will defend her

“I think it is nice when a man defends his woman from bad people but in the end we should be able to defend ourselves alone. We don’t need a man who will protect us and act like we’re powerless when he is there for us. I want to stand up and fight for myself, without a man to help me.” Jane, 31

4. Someone who has a perfect body shape

“There isn’t anything bad about having a guy who takes care of his body but if he spends more time working on his six-pack than with me, I don’t want him. It is not so important that he is perfectly made, it is important that we click and that he fulfills me.” Maria, 29

5. Someone who will be the only man of the house

“I don’t want to be with a man who will think that he is the man of the house and who will decide about all the big things. I want to be a part of the process as well and I want to do all those things that are said to be reserved for guys.” Roseanne, 28

6. Someone who is more intelligent than average

7. Someone who is great-looking

“There is nothing bad about having a great-looking guy but if he is only focused on his clothes and shoes and the way he looks, I don’t want to date him. I definitely don’t want to be with a guy who uses more perfume and face cream than me!” Annie, 22

8. Someone with a great house and car

“It is nice when a man is financially independent and when he has his own place to live but that is not necessary for a stable and healthy relationship. Emotions are more important than material things!” Nina, 26

9. Someone who is emotionally stable

“There is something about all those guys who are emotionally unstable. They somehow look like they need help and you can’t resist giving them what they want. I don’t know about others but I really like men who are not so perfect and who need me to be complete.” Tina, 30

10. Someone who wears fancy clothes

“Having a man who can take care of himself is nice but it doesn’t mean that he will be more attractive if he wears fancy clothes and if he smells better than me.” Nancy, 23

11. Someone who can drive fast

“Guys who drive fast are not guys who are appealing because of that. I don’t need someone who will show off in front of me with his driving skills but I want someone who will be patient with my slow driving.” Susan, 20

12. Someone with a perfect hairstyle

“This is something that is important to some girls but not to me. I would rather have a guy with shaggy hair and I would love him because of that.” Veronica, 25

13. Someone who can drink a lot of beer

“I know some girls who are crazy about guys who like beer and who can drink a lot but I don’t. I like men who drink as much as they want but who don’t compete with others just to show off.” Linda, 36

14. Someone who will be amazing in bed

“I am not saying that having a guy who is amazing in bed is a bad thing but I don’t judge guys by that rule. Someone who is not that perfect in bed can love me more than some fuckboy who sleeps with every girl he finds hot.”Marianne, 37

15. Someone with a tattoo

“I know girls like guys with tattoos because they think they are hot but that is not at the top of my list of priorities.” Lucy, 29

16. Someone who can fight very well

“As far as I am concerned, I wouldn’t like to have a man who can fight well. That is not attractive to me at all. If he likes to fight, there is a chance that he will hit me in a moment of rage.” Lisa, 33

17. Someone who eats healthily

“He can eat whatever he wants as long as he loves me.” Joanne, 31

18. Someone who is persistent

“I don’t want to be with a man who will be persistent about everything. I want someone who will listen to what I have to say and then decide what is best for us.” Cindy, 24

19. Someone everyone thinks is perfect

“Dating a perfect man? Where are there guys like that at all? I never met a perfect man and frankly speaking, I am a bit afraid to date a man like that. Perfection doesn’t exist and a guy who says that he is perfect is probably far from it.” Amanda, 21

20. Someone who smells good

“I really don’t need a man who will spend all his salary on buying expensive aftershave. I just want one who takes care of his body normally but who does not exaggerate.” Trisha, 22

21. Someone who can afford anything I want

“I don’t need a man who will buy me everything that I wish for. I want to be the one who will work hard to provide myself with the things I need.” Lynn, 29

22. Someone who wears his heart on his sleeve

“Having a guy who is honest and reliable is nice but he doesn’t have to express his deepest emotions every day.” Angela, 25

23. Someone with an amazing career

“It is nice when a man works hard to provide his family with what they need but I will not be attracted by some doctor or lawyer just because of his title.” Cherry, 23

24. Someone who is creative

“I am not so creative so I don’t want my other half to be—that is not really interesting to me. I would rather be with someone who has fewer talents than others but who will love me just the way I am.” Marina, 22 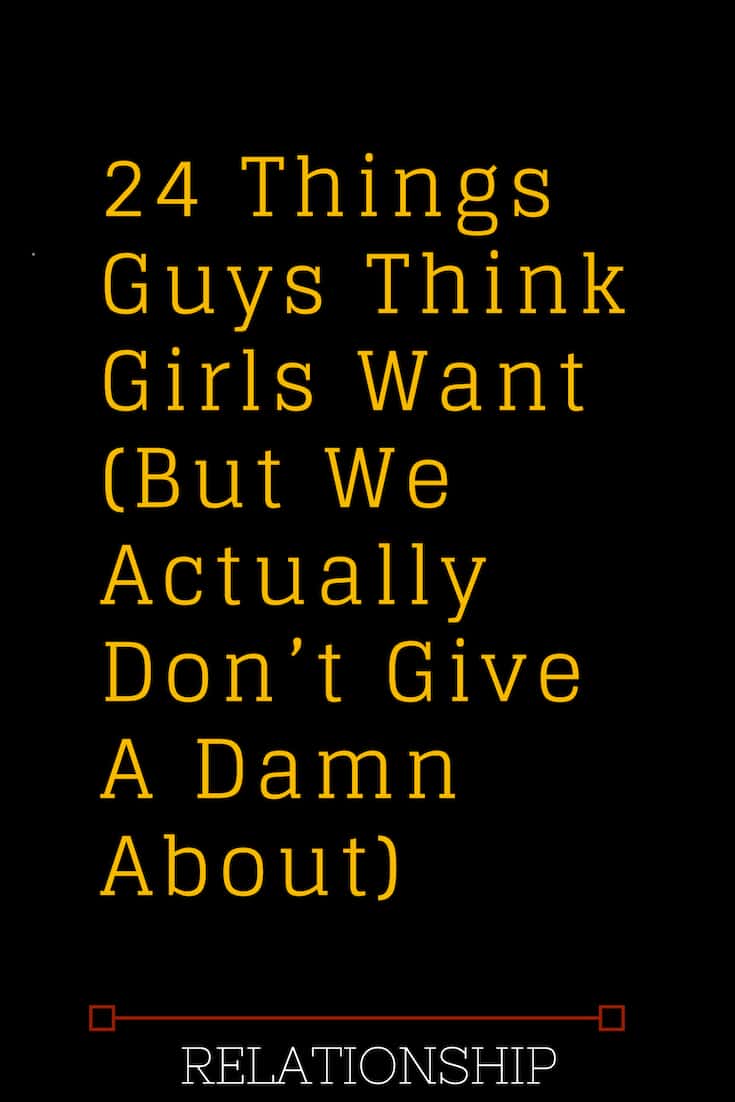 5 Signs You Are Just Convenient For Him