It is not easy to know how to behave when you sleep with a guy for the first time, especially if that is your first time ever. You probably want to say all that lies in your heart and admit that you are head over heels in love with him but that is not what will keep your man interested. You see, guys and girls are quite the opposite when it comes to lovemaking. Once a girl sleeps with a boy she becomes addicted to him because she connects with him deeply, while men don’t feel that way.

They are not half as excited as girls when it comes to sex. It is true that they want it bad but girls do it with more emotions than men. That’s why girls become clingy, needy and pushy once they sleep with a man for the first time and boys behave like it is not a big deal. So, how to behave after sleeping with a guy for the first time? Are there some rules that we all need to follow? Well, there are rules but it is up to you whether you will follow them or just listen to your heart.

I know it would be much simpler to just listen to your heart and not play any games but that is exactly what you need to do if you want to make your man interested in you after he gets what he wants. And here is how:

Okay, you did it for the first time in your life and you feel so strange. You are trying to see if something about you has changed but you can’t figure it out. You just feel different and that’s all. And when you turn your head there is a man lying next to you, feeling totally relaxed while you are wondering if you did all right.

But that is the moment when you could start panicking but whatever you do, don’t do that. Don’t be weird, asking him if you were good or if you will repeat it again.

Try to be as natural as you can and just enjoy the afterglow. I know that you would like to do so many things now but it is better to leave them for next time. If you say something wrong, maybe your man won’t be interested in you again or he will think that you act quite strangely. And trust me, that is not the point of this story.

Just relax and enjoy and whatever you do, don’t talk so much. Don’t make him think you are a pain in the butt. Let him start a conversation if he likes but don’t initiate anything. You can just tell him that you had a great time and that you are glad that he was your first one. That will surely melt his heart.

The worst thing that you can do after sleeping with a guy is to act clingy. I completely understand that you are maybe already in love with him but don’t show it to him in this way. Play hard to get a little bit because that will make him yours in the long-term.

If you act like a clingy and needy girl he will think that you are pushing him to do things that he is not comfortable with yet and he will just leave. Instead, pull yourself together and pretend that you are okay with the fact that you just had sex, which doesn’t need to lead to anything serious. In that way, you will intrigue him and he will start chasing you.

When a guy sleeps with a girl for the first time, he will know what kind of a woman she is by her reactions after sex. If you act pushy, asking him some tricky questions or pushing him in any way, he will probably leave you and never come back again.

On the other hand, if you just act cool, he will want to meet you again and definitely repeat your wild games under the sheets. So, be smart when choosing your words after you sleep with a guy because the first impression is the most important one.

When you finish your thing, it is time to just lie down and enjoy the afterglow; you know, that moment of peace and harmony that you crave so much. So, don’t spoil it by asking too many questions or asking him to do it again. He needs some time to ‘recover’ and you don’t want him to think that you are one crazy girl. You need to have a line you won’t cross and if you stick to that rule, you will always get what you want.

5. Don’t imply anything about the future

You know, there are some girls who fantasize about marrying the first guy they sleep with but that is not what happens in most cases. Somewhere along the road, they figure out that those boys are not as ideal as they pretended to be.

So, they decide to leave them and find their happiness in another place. But when it comes to the first time with someone, the last thing a man wants to hear afterward is stories about your future family, a house with a big garden and a pet.

If you want to know how to behave after sleeping with a guy, there is one golden rule you need to follow­­–let him talk! If you are the only one talking, it won’t be interesting to him.

Instead, try to talk to him about something that you have in common. Let him tell you more about him because chances are he will get a little bit emotional after sex. He will think that he can trust you and I am sure he will want to share some things with you.

Focus on having fun so try to engage him in an interesting conversation. After you see that it was enough, tell him that you need to get up early in the morning, kiss him goodnight and leave. Don’t wait for him to leave you because if you do it first you will be seen as cool and he will want to chase you even more.

8. Appreciate the night you had

After you sleep with a guy, you should appreciate the night you two had and be okay with the fact that he might not want to have anything else with you. Not every act of sex should lead to a relationship and that is totally normal. For you, it is the best way to have some boys as examples and to wait for the right one for the big things.

So, just appreciate the things you learned when you were sleeping with him and move on with your life if there is not enough chemistry between the two of you.

Boys like fun girls. Period. So, if you think that you can tell jokes well or if you want to share something funny that happened to you, just relax and do it. He will think that you are such a fun and easygoing girl and he will be more interested in you. If you succeed in making him smile, you are halfway to winning his heart. I just hope he is worth it!

10. Be sexy, busy and successful

Just because you have slept with a guy it doesn’t mean that you are his property. So, do the things you did before you met him. Be elegant, sexy and busy. Show him that your life is complete even if he is not a part of it. Show him that you are a high-value woman and that if he wants you, he needs to work hard to win you over.

Don’t just fall for his good looks and his adorable smile. Let him see that you are not an easy girl he can lead on. Show him that you are more than that and I am sure that he will have a better opinion of you.

After you sleep with a guy it is quite important to know what to say. You don’t want him to think that you are some kind of a freak girl who will want to get married just because you two slept together once, so don’t mention anything about the future. Also, don’t act clingy and needy because that will turn him off instantly.

Instead, try to talk about some fun things that both of you have in common. In that way, he won’t think that you are awkward but he will consider you a smart and fun girl and he will want to see you again or even get to know you better.

One important thing to know about after sleeping with a guy is to learn how to respect him. Of course, it all depends on whether it was just a one-night stand or if he wants to get to know you better but you can respect the wishes of the man you slept with in any case.

You will avoid any hard feelings when doing so and if it doesn’t last, don’t feel bad about that. You never know when the real deal will come along so try to respect every partner. If you do that he will respect you as well.

Mutual respect is the key to a stable and healthy relationship so never think that you are giving too much to someone you have known only for a short time. You never know what your one-night stand can turn into. 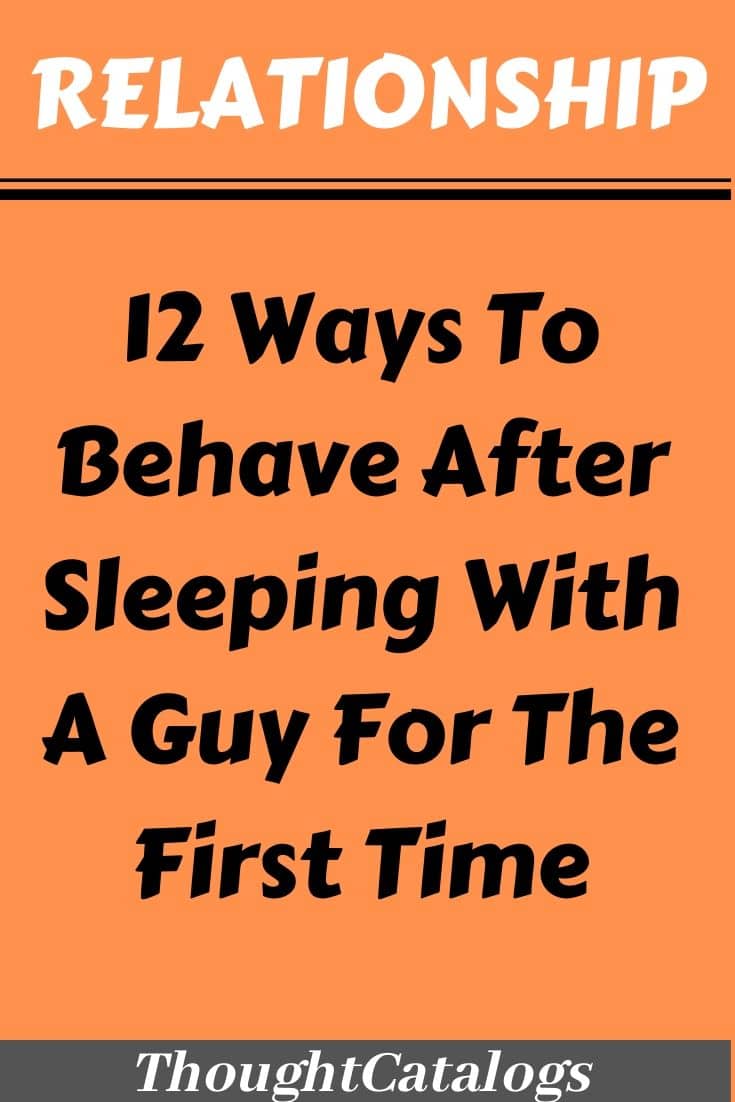 5 Zodiac Signs Who Will Be Better Off Single This Year