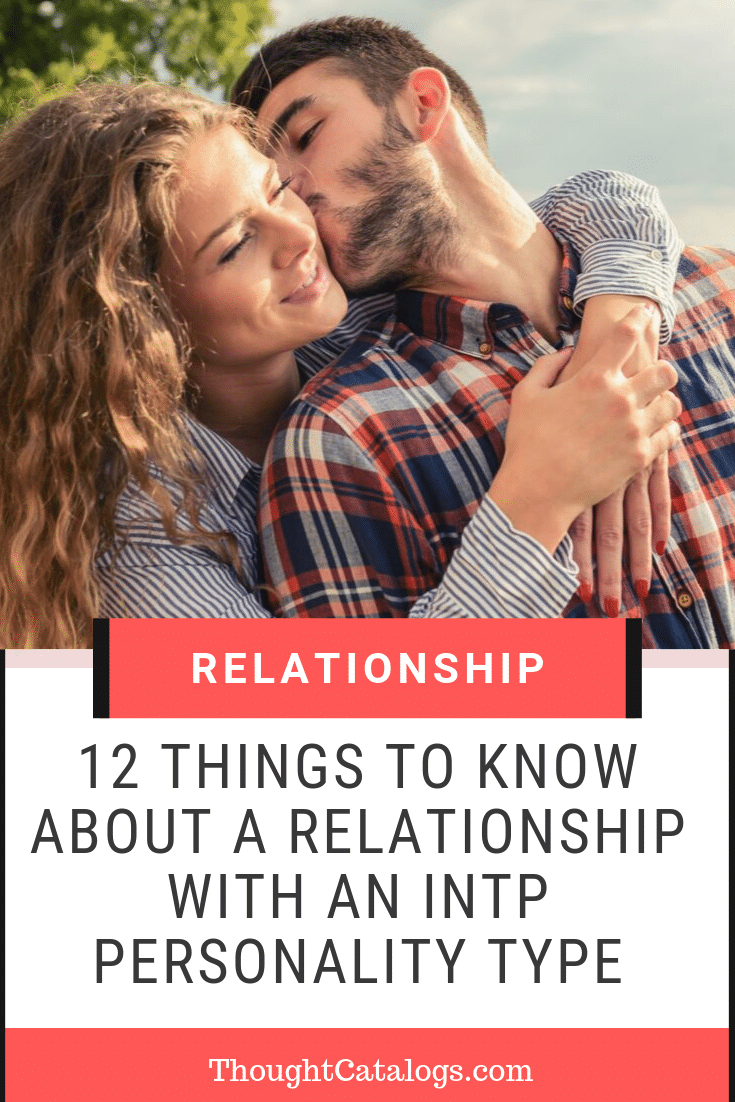 When you look up the up the INTP (Introverted, iNtuitive, Thinking, Perceiving) personality type in the the Myers-Briggs Type Indicator (MBTI), you’ll see that these people are logical thinkers who are constantly absorbed in thought. And not only that——they often seem detached from the rest of the world because they are focused internally;; they are occupied by such things as the mysteries of the universe and the deeper meaning of life.

But how do they act in relationships? OK, we know that they are the golden pair with an INFJ personality type but what is it that these people look for in a partner and what do they have to offer to a relationship? What are the advantages and disadvantages of dating an INTP personality type? What to expect when you get yourself involved with an INTP?

If these are some of the questions you are looking for answers to, you’ve come to the right place because here you have the 12 most important things you need to know about being in a relationship with an INTP personality type.

1. They don’t have many relationships during their life

If you know someone belonging to the INTP personality type, you’ll probably know them as being forever alone. The first thing you need to know about dating someone of this personality type is that they are not people who let just anyone into their life.

Their inferior function is extraverted feeling, which means that they are one of the introvert personality types and that they don’t enjoy being in the company of a large group of people. Instead, this type usually has a small circle of close friends and is not prone to meeting new people because they prefer having a few real friends than dozens of fake ones.

INTPs don’t have shallow relationships. Instead, every relationship in their life is close and significant to them because otherwise they wouldn’t try to maintain it.

They act in a similar manner when it comes to romantic relationships. INTPs will never have many romantic or sexual partners because they need time before they really get to know someone and before they allow them to be a part of their life.

So, if an INTP chose you to be their potential partner, know that they saw something unique and special in you and that they plan on keeping you around for a while.

2. They are loyal and faithful

Even though INTPs usually have a hard time entering into new relationships, when they do get themselves involved with someone, they take it very seriously. An INTP is not a personality type who enjoys having casual or meaningless intimate relationships.

Instead, they always focus on building a serious, long-term relationship in which they’ll be dedicated to their partner completely.

When an INTP loves their partner, they will always be loyal and faithful to them. There is no place for infidelity in an INTP’s mind and they won’t even consider cheating on their loved one. Instead, they will always put a lot of effort and energy into making their relationship work.

Another quality common to this personality type is their honesty. INTPs love to speak their mind to everyone around them and this can especially be seen in romantic relationships.

Whatever an INTP tells you about themselves in the beginning, it is nothing but the truth. They are not likely to make big promises they don’t have any intention of fulfilling, nor do they have a habit of presenting themselves as better than they actually are.

When an INTP tells you about their emotions, you can trust them because they are probably not lying just to use you or to get into your pants.

But sometimes, this characteristic of theirs can be problematic because an INTP will always tell you the truth right to your face, no matter how painful or harsh it might be. Even though this is always better than lying, some people find this offensive and have a hard time understanding an INTP’s means of communication.

4. They are attracted to intelligence

INTPs are one of the personality types who are more attracted to intelligence than just to good looks. They enjoy having smart romantic partners with whom they can have long, meaningful conversations. INTPs are known as inventors and philosophers who are always full of ideas and their match made in heaven is someone similar to them.

When an INTP lets you into their life, it means they admire your personality and your brains and that they think highly of you. This doesn’t mean that they don’t consider physical attraction to be important—they just put intelligence first.

5. They have a hard time moving on after a relationship

Being committed and dedicated to their relationship, INTPs are people who give all of themselves to their loved one. And even though this is a great thing for their partner, sometimes it is harmful to themselves.

INTPs usually have a hard time accepting that their relationship has come to an end. It takes them a long time to really get over their ex and they never move on easily. Even when it appears that they’ve left the past in the past, INTPs are still affected by everything that went on in their previous relationship and it takes them a lot to give their heart to someone new.

After a heartbreak, they usually become even more guarded and careful about the people they let in because they are afraid of getting hurt once more.

6. They are great in bed

INTPs have a vivid imagination and are highly creative when it comes to all aspects of life. This is especially the case when it comes to their sex life and it is what makes them a highly sexual personality type.

If you happen to end up in bed with an INTP, there is no need to be ashamed of letting your wild side surface. People belonging to this personality type are always open to any new ideas and unconventional things and nothing you might suggest will be too much for them, nor will it scare them off.

7. They are rarely romantic

If you are looking for a partner who will be making great romantic gestures and who will use every possible opportunity to surprise you, I am sorry but I have to disappoint you and tell you not to expect these kinds of things from them.

So, try not to be surprised if an INTP forgets your birthday or doesn’t take you out to a fancy dinner on your anniversary because that definitely doesn’t mean they don’t care about you.

No matter how much they love you, INTPs simply don’t have it in their blood to be romantic in the traditional sense of romance. Even when they try to do something romantic, it will always be something different—they are never into stereotypical, sweet or cheesy romance.

8. They need freedom and will give you your personal space

Another thing INTPs are definitely not is too needy or too pushy in a relationship. Despite all the love they feel for another person, they never need that somebody to complete them or to give their life meaning.

No matter how close they are to someone, even if that someone is their romantic partner, INTPs enjoy their freedom and won’t give it up for anyone. The best way to describe this is that they are emotionally independent and self-sufficient, probably because they are used to spending a lot of time on their own.

You can observe this quality of theirs in two different ways. On the one hand, this can be a great thing because they will have no trouble understanding your need for some time without them and they will rarely invade your personal space. But if you are one of those people who want to spend time just with your other half, then you might feel left out or emotionally neglected by an INTP.

9. They have a hard time trusting people

INTPs are guarded and closed people. They don’t give their trust to just anyone. When you are in a relationship with this personality type, you might feel like they are constantly analyzing and dissecting your every move. This personality type uses introverted intuition, which means that they are always in search of a deeper meaning behind information.

You might feel like they don’t trust you and as if they are questioning everything about you because they are so suspicious. And that is exactly what they do at the beginning of every relationship.

When an INTP finally starts believing you and when they finally give you their trust, know that they’ve let you in completely and that you are special to them.

10. They are bad at expressing their feelings

Another thing that might upset you about your INTP partner is their inability to express their emotions. They tend to keep all of their feelings to themselves and this is especially the case in the beginning, when they are just getting to know you.

I understand that sometimes you need vocal confirmation that your loved one loves you back but the truth is that you shouldn’t expect to hear these words from their lips too often. What you need to know is that INTPs actually have stronger feelings than most other logical types—they just have trouble embracing and showing their emotional side.

But INTPs don’t have trouble expressing their positive emotions. When they are angry or sad, they don’t know how to verbalize it and that often causes them to start acting passive-aggressively or to hold grudges forever.

This personality type isn’t fond of arguments and they will do whatever it takes just to avoid conflict or any form of disagreement.

Even though this can be a great thing because it frees your relationship from unnecessary fights, it can also bring negative consequences to the two of you. The fact is that some things need to be resolved and that running away from them won’t make them disappear and that is exactly what INTPs are trying to do.

Eventually, this causes problems to pile up and the tension levels get higher and higher.

12. They are not empaths

One of the biggest disadvantages of dating an INTP is the fact that they are cold and not empathic. People belonging to this personality type are not tuned in to their own emotions and consequently, don’t understand their partner’s feelings either.

It’s not that they don’t care about the way you feel—it’s just they don’t have the ability to sympathize with you. If you are having a bad day and looking for verbal support or if you want a shoulder to cry on, look for it somewhere else because an INTP is not likely to give you what you need.

These Zodiac Signs You Connect With Most Deeply In 2022, Based On Your Sign