Is He Really Into You Or Is He Just Playing You?

So, there is this guy you want to spend time with, but you are having a hard time getting to the bottom of his intentions—is he just being friendly, is he looking for nothing more than a hook-up or are you seeing signs that he wants you to be his girlfriend?

Is this guy interested in a serious relationship or is he just looking for a good time? Is he a manipulative asshole who only wants a booty call and to see other women or are his intentions honest? Can you trust him and put your guard down or is it better to be careful, and to play it safe to protect yourself?

These are all the things going through your mind right now, and the questions you have no answers to. Well, that is why we are here to help you with your dilemma. Here to assist you with decoding those encrypted messages men send on a daily basis and help you figure out what is actually going on in this guy’s head.

Are You Really Ready To Be His Girlfriend?

Have you just ended a long-term relationship that has left you broken and devastated or are you in a good place mentally and emotionally to be looking for a boyfriend?

These are the questions you need to answer honestly to yourself if you are intent on pursuing this guy and looking for dating advice to help you throughout. The last thing you need is a new squeeze if your heart is still healing from your previous heartbreak.

But if you feel strong and ready, then let’s find out what this man wants and if you’re the girl he secretly wants to get with!

12 Clear Signs He Wants You To Be His Girlfriend

1.  He really wants to get to know you

One of the first signs he wants you to be his girlfriend is the fact that this guy is doing his best to get to know you on a deeper level. He will not ask you questions just for the sake of conversation but for the sake of really getting to the bottom of your personality. And that’s a big deal actually.

Now, the tricky part is that even emotional manipulators want you to talk, and they try to engage you in conversation, but their purpose is completely different. They want you to open up, so they can find out as much information as possible to use against you.

However, when you meet a guy who genuinely cares about you, he will ask about your life and encourage the conversation because he really wants to know your interests and the things that you do. He won’t just nod his head every time you talk. He will participate in your conversation and show interest to know absolutely everything about you.

2. He’ll use inside jokes

He will do this all the time. He will tease you while you’re in a group of friends. And the thing is, he will use inside jokes that no one understands except the two of you.

And not just any time—he’ll do it exactly when you need it the most. A man who is interested in you or in love with you is a man who notices any changes you have in your behavior.

You won’t be able to hide anything from him. When he sees that your spirit is down or that you aren’t feeling your best, he will compliment you and make you feel like a million bucks. This guy will know just what to say and how to say it. You’ll see. A man who doesn’t care would just walk away in the opposite direction and let you deal with your shit alone.

4. He will show his feelings

When a guy likes you for real, he isn’t scared of showing you his vulnerable side. He won’t be afraid to show how he’s really feeling because he trusts you, and he wants you to trust him before he asks you to be his official girlfriend. And this is the type of guy who won’t have trouble saying ”I love you” when the time is right.

There will never be any big secrets between the two of you. This doesn’t mean that you guys have to tell each other literally everything, white lies are allowed, but there won’t be any big, harmful secrets. You can be sure of that.

The best part is that this guy will never act passive-aggressively. Instead, he will always let you know if something you did hurt or upset him, so you can take care of it right then and not sweep it under the rug until the problems don’t have anywhere to disappear to.

Another important thing that can help you see that a guy wants a real relationship with you and a sign he wants you to be his girlfriend is the fact that he’ll never even try playing with your head. This guy will never manipulate you or trick you into doing something you don’t want to do.

He knows that you are an independent person and that he can’t change you. He likes you for who you are, and no emotional manipulation is even on the table.

Besides, he is a man, and real men face their problems. Boys hide their insecure faces behind various manipulations.

6. He will protect you

When a man has a natural urge to protect your needs, it is without a doubt one of the biggest signs he wants you to be his girlfriend. This is a guy who will always be there for you and make sure nothing bad happens to you.

No, he won’t be following two inches behind you and acting possessively because he knows you need some personal space, as we all do. Nevertheless, if he sees that you feel threatened by someone or if you don’t know how to handle some problems, he will stand by your side and have your back.

This guy will make sure you know he is always at your service, but at the same time, he will respect your independence because he knows you are more than capable of protecting yourself.

7. He will do his best to impress you

When a man is in love with you, he won’t stop trying to impress you. Since he has strong feelings for you, he really cares about what you think of him. If you are going to be his girlfriend, he wants you to think positively of him.

Don’t get me wrong—this doesn’t mean that he’ll pretend to be someone he’s not. Instead, he’ll just be the best possible version of himself when he is around you so that you would like him more.

All of us have a past, and the man we are talking about is no exception. Nevertheless, one of the signs he wants you to be his girlfriend is the fact that he won’t let his emotional baggage ruin his chances with you.

This guy won’t have any secrets with you because he wants a clean slate. So, if he has anything to say, he’ll say it right away. He doesn’t want to risk you finding out things about his past once you are together.

When a man is interested in you romantically, he’ll do everything in his power to find out more about your love life. This doesn’t mean that this guy wants to dig through your past, so he can use it against you—he just wants to know if you are emotionally available and what kind of men you like, so he can know if he fits the criteria.

Besides, one of the signs he wants you to be his girlfriend is also his jealousy. He knows you two aren’t in an official relationship just yet, so he doesn’t have the right to show you his jealousy, but he simply can’t hide the fact he feels threatened by other men surrounding you.

10. He initiates communication and makes plans

One of the most certain signs he wants you to be his girlfriend is this guy’s texts and phone calls because they help him say the things he probably doesn’t have the courage to tell you in person. Even if this guy is shy face-to-face, he is constantly asking you out and trying to initiate communication by phone.

He is always the first one to contact you and the one to invite you to spend some time together. If this is someone you can relate to, one thing is for sure—this guy has fallen head over heels for you, and he won’t be able to hide his feelings for much longer.

11. He will randomly compliment you

You can be just walking down the street and talking about the most random thing, and he’ll just look at you and genuinely say how beautiful your eyes look in that particular light. And you’ll just be in awe of his honesty that took you by (a very welcome) surprise.

Most guys just say your ass looks good in those jeans or that your dress looks killer on you, but this type of compliment is a different story. It’s deeper, and he has no ulterior motive but to let you know how beautiful you look. And this is one of the telltale signs that this guy is really into you and not just your body.

12. He has introduced you to his friends and family

There is nothing more sacred and important than one’s friends and family. And if you have had the privilege of being introduced to them, this means he is serious about you. Guys don’t just bring random girls to meet their folks.

There has to be a deeper emotional connection for that to happen. And if you’re the first person he has introduced to his family out of all of his ex-girlfriends, rest assured, you’re special to him. Before you know it, you two are going to be having ”the talk”, and you’ll be his official girlfriend. This guy is a keeper. 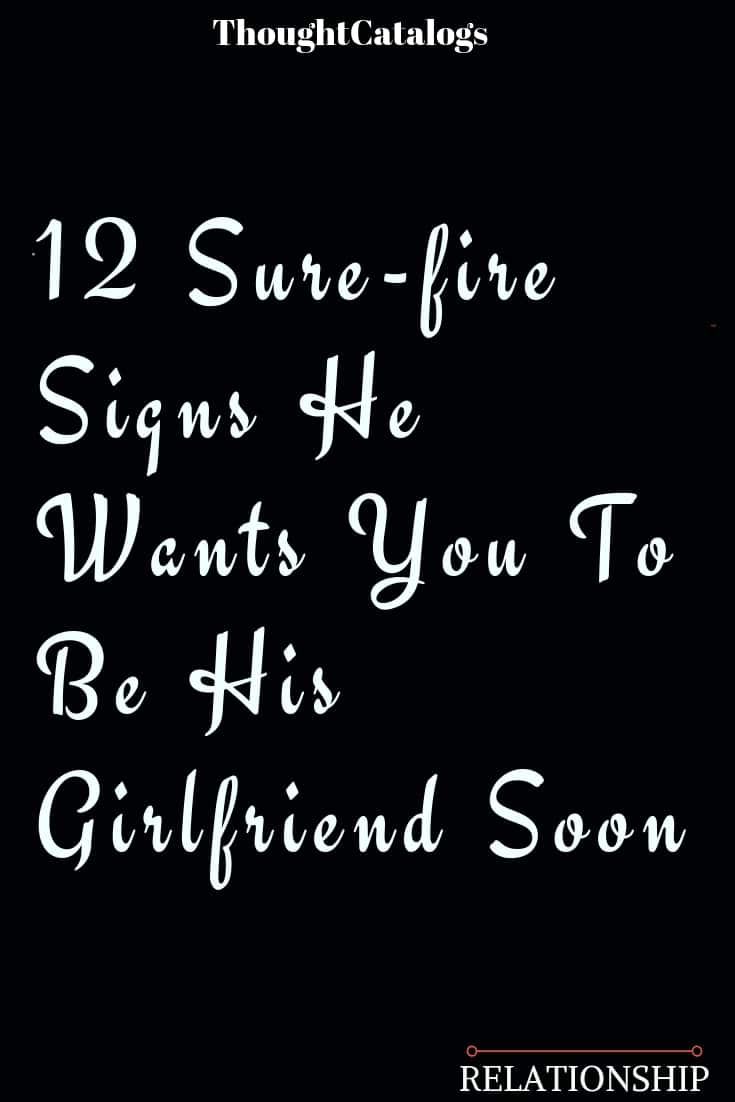 1. Taurus. The first thing they perform in the early morning is to inspect their accounts and also see if something fascinating took place. They can't...

On Tuesday , many will want to clarify their relationship with people who are two-faced or need you only when they have problems. Today...

If you’ve been wondering about the magical ingredient that turns guys on, you’re at the right place. So, let’s start! The first questions that...

GEMINI ( May 22-- June 21). Yourself. We create a lot of our very own issues yet we likewise have the ability to discover services to them. LIBRA. (...

You are probably in some bar right now, checking out your next target and thinking about the ways to manipulate her. Or you are...
𝐓𝐡𝐞 𝐭𝐡𝐨𝐮𝐠𝐡𝐭 𝐜𝐚𝐭𝐚𝐥𝐨𝐠𝐬 is an Educational & Entertainment Platform theme. Our Team Publishes 100+ Content On Weekend/Monthly. We will motivate the needs of any person & make them inspire instantly You, Will, admit Once You Begin Your Journey With Us. The Thought Catalogs platform is a perfect choice.
© Copyright © 2022 - All Rights Reserved | TheThoughtCatalogs.