Most shitty boyfriends are easily spotted in the early stages of a relationship, all you have to do is to pay close attention to his behavior toward you and the people around you.

Of course, there are manipulators who have perfected their mind games so well that they’re so hard to figure out until it becomes too late.

But even they can be spotted through these signs that can tell you if he will be a horrible, terrible boyfriend. Is your date on this list?

His schedule is so busy and full that your dates are arranged in advance and are timed to precisely the amount of time he has.

You feel like you need to beg him for his time and that’s not something any woman should settle for. If he wants to see you and spend time with you, he’s supposed to make sure that he clears his schedule for you.

Otherwise, this is a sign of a selfish man who values himself and his time above anyone else.

2. All he cares about is the physical stuff

There are no deep conversations or curiosity to get to know you on a deeper level. Everything is about making out, kissing and making love.

That kind of man is good for a short-term fling, a one-night stand or a summer affair. Other than that, he’s as good for a relationship as Nutella is for a curry.

3. He takes you and your time for granted

It’s like he expects you to put everything aside the moment he calls and for you to care for him and be kind. Love, just like respect, needs to be earned.

If he has done nothing for you to respect his needs, his time or basically him, he can’t expect you to do it. And still he does and he takes all kinds of gestures for granted, like he’s some gift from the heavens.

He keeps you at a distance, keeping himself emotionally closed off and secretive. This is usually a sign of an emotionally immature man who is afraid of letting someone in or he simply doesn’t know how to.

It’s not up to you to change him and help him with it, because that’s a decision he needs to make on his own and that’s a path he needs to walk alone. Being with this kind of man will only leave you both emotionally and physically drained.

5. All you ever talk about is… him

Ah, the egomaniac. This one is easily recognized, for you will find yourself on a date where you will talk about him, and I mean only him.

If you even start a subject about yourself, he will instantly remember a story where he experienced something similar, and you will end up talking about him again. This is also the sign of a narcissist and the best thing you can do is run for your life.

6. The word ‘sorry’ isn’t in his vocabulary

If he’s late, he won’t apologize. Not because he doesn’t know how to, it’s because he truly believes he has no need to do so. I mean, you’re lucky he even showed up at all. And no matter what he does, he will never apologize.

If he said something to upset you, he won’t take the blame. Instead, it will be you who should have warned him about it and he will always find a way to blame it on you or somebody else. It’s never him.

You even caught him in a lie, but he still doesn’t stop nor does he feel guilty. He will simply change the subject and move on. He will tell lies about the most mundane things, and even if those lies are hardly believable, he just won’t stop.

It can seem funny in the beginning, but trust me, small lies turn into bigger ones and a relationship without trust is not worth having.

He’s blowing up your phone with messages, instantly follows you on all your social media accounts and it seems like he’s everywhere. He wants to talk to you 24/7 and wants to spend every single second of his free time with you.

We get it, it’s amazing when you meet someone you really like and it’s completely natural to want to spend time with them and get to know them better.

But there are certain boundaries and lines need to be drawn. If he makes you nervous, don’t think it’s you, as it could definitely be him.

He is highly unpredictable and you never know where you are with him. He will blow up your phone one day and straight-up ghost you the next.

He will talk about your future for one week and be closed off the next week. This kind of man needs to figure things out by himself before he comes to you.

Trust me, he’s not the type of man you should fall for.

10. All of his exes are crazy bitches

It’s okay to have bad relationships and some are worse than bad. It’s okay if your ex is an idiotic asshole but if each and every one of his exes is a crazy bitch, that is not okay.

It just says that there is something wrong with him, because the only thing all of those relationships have in common is him.

This is also a sign of an emotionally immature man who doesn’t know how to handle emotions and how to put any effort into the relationship.

Do you really want to be just another crazy bitch on the list? 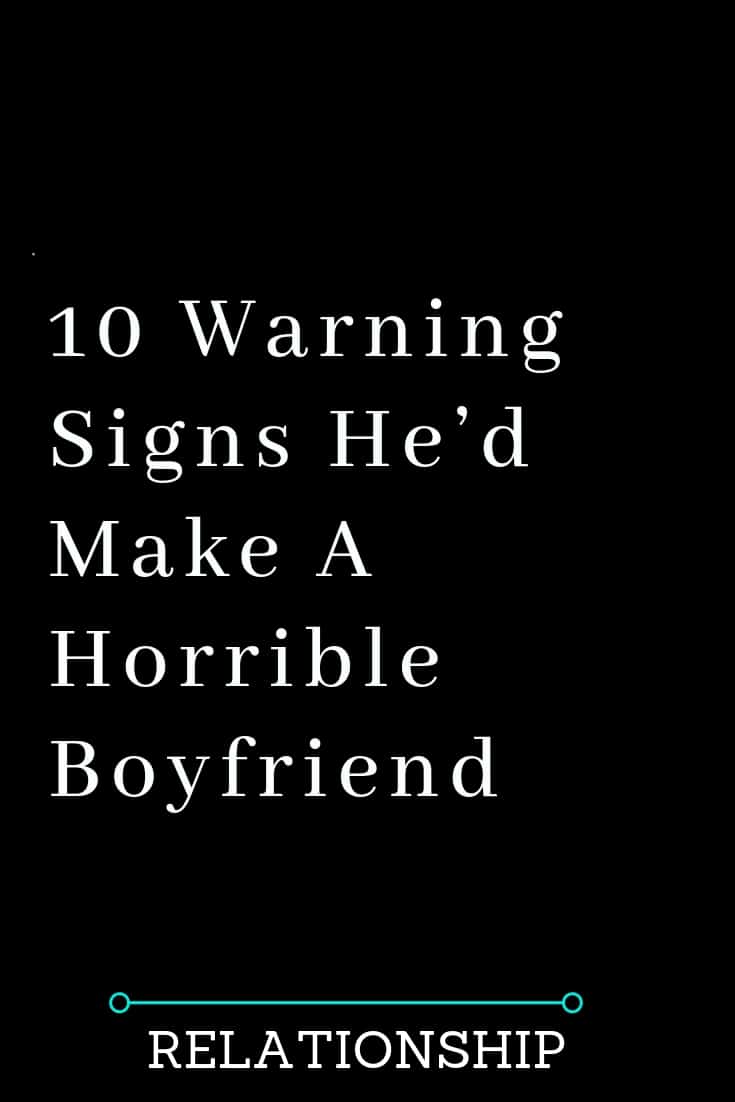