What does it mean to have a restless spirit? Why are those people different from the rest of us? For all of you out there who don’t know anything about restless spirits, here is the explanation—those are people who are constantly moving.

They are all those creative people who rise against social conventions and make their horizons large. If you want to know what their lives look like, read further because I am bringing the most common things all restless spirits do!

Meeting new people for a restless spirit is the fuel that keeps them moving on. They simply like to hang out with new people, learn from them, and even travel with them. The fact that those people are complete strangers is not a big deal, and if they are high quality people, any restless spirit will stick to them.

The good thing about them is that they will always be sincere from the first moment when they meet someone new. So, if you decide to spend some time with the wanderer you meet at the bar, be prepared for a lot of laughing and positive energy because that is what they are really about!

When I met a man who was a wanderer, he told me that he refused to spend his whole life in one place. After thinking about it, I realized that he was right. I mean, it is better to travel and discover new countries when you are young and reckless.

When you get old, you won’t have time to do that or maybe you won’t feel like doing it. In the end, life is all about learning new things and meeting new people. The sooner you understand that the better your life will be.

3. They don’t want to settle down in one place

Their ideal life would be traveling around the world and meeting new people. They just can’t sit still. They refuse to do that. If they stay in one place more than a month, they don’t feel comfortable in their skins.

This characteristic makes them different from others and also makes them so unique and special. And for all of you ladies out there who choose a person like this to be your life’s companion, be prepared for living the adventure of your lives.

4. They are not into an ordinary life

A big house with a pool and a fancy car is not their cup of tea. They would rather go backpacking in some unknown places than sticking to one place only. Also, a restless spirit can’t work at the same job for a long time, especially if we are talking about an office.

They would feel like they are suffocating themselves. Instead, they would like to travel all around the world taking photos of war zones or ecological catastrophes and in that way, live their lives to the fullest.

Their life motto is: “What will be, shall be!” They don’t do agendas and schedules because they don’t feel good doing it. They’re open-minded and if they want to do something, they will do it right away instead of waiting for a scheduled meeting. This is how life works for them and even if they want to, they can’t live it in a different way!

6. They don’t care where they will end up

Every new day is like an adventure for them. They don’t care where they are going or where they will end up. They just care about the people they will meet on their life’s journey. As long as they are on the move, they are happy.

Every restless spirit knows that they can make the best out of the worst places and find something positive that will make them come again!

7. They know they are special

The fact is that we are living in a world where there are some rules. Rules regarding life, jobs, and private things. The catch is a restless spirit will never obey these rules. They can’t be in one place for a long time, so they probably won’t be stuck in an office all day.

Instead, they will do things that make them happy and fulfilled. They know that exploring new things and places is not wandering—it is just a lifestyle.

8. They actually think about their lives

The fact that they have a restless spirit doesn’t make them bad people. They are deep thinkers, but the thing is that they think outside the box, obeying some of their own rules. They know life is beautiful, and they will try everything that their life serves up to them.

All wanderers make it easy to step through life because they are not the kind of people that will be worried about things. They know that there is someone above us who decides about our lives and knows what the best is for us!

If you ever meet a wanderer, you will wish that you are just like him even for a second. Their life is exciting, and that moving all around is what makes them so unique. They are not afraid to try new things.

They are not afraid to make mistakes because they know they will learn something from them. They don’t want a mediocre life—they want it all or nothing at all! And I must admit that they are right!

10.They know why they are doing it all

The truth is that people move for different reasons. On the other hand, every restless spirit moves because they never know what they will find on the other side of the road. Maybe some of them have great lives here, but who can guarantee that something better isn’t waiting for them in a different place. They just need to let everything go. They already realized that stepping out of their comfort zones is the best thing they can do for themselves!

So, next time you see a wanderer in the street, don’t judge him so easily. Don’t think he is a lazy man because he doesn’t have a full-time job and a place where he can crash. His life is not easy like you think. He has just decided to use all the possibilities that life puts in front of him.

And one day when he looks back, he will feel satisfied and good because he once lived his life to the fullest! 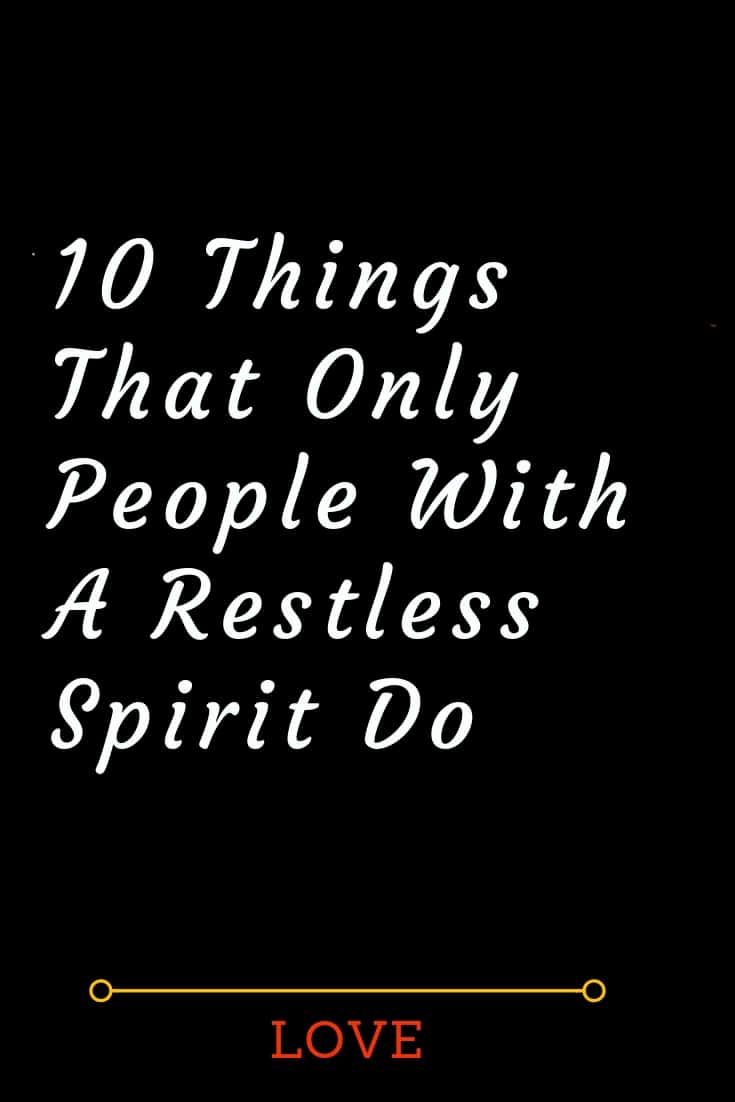