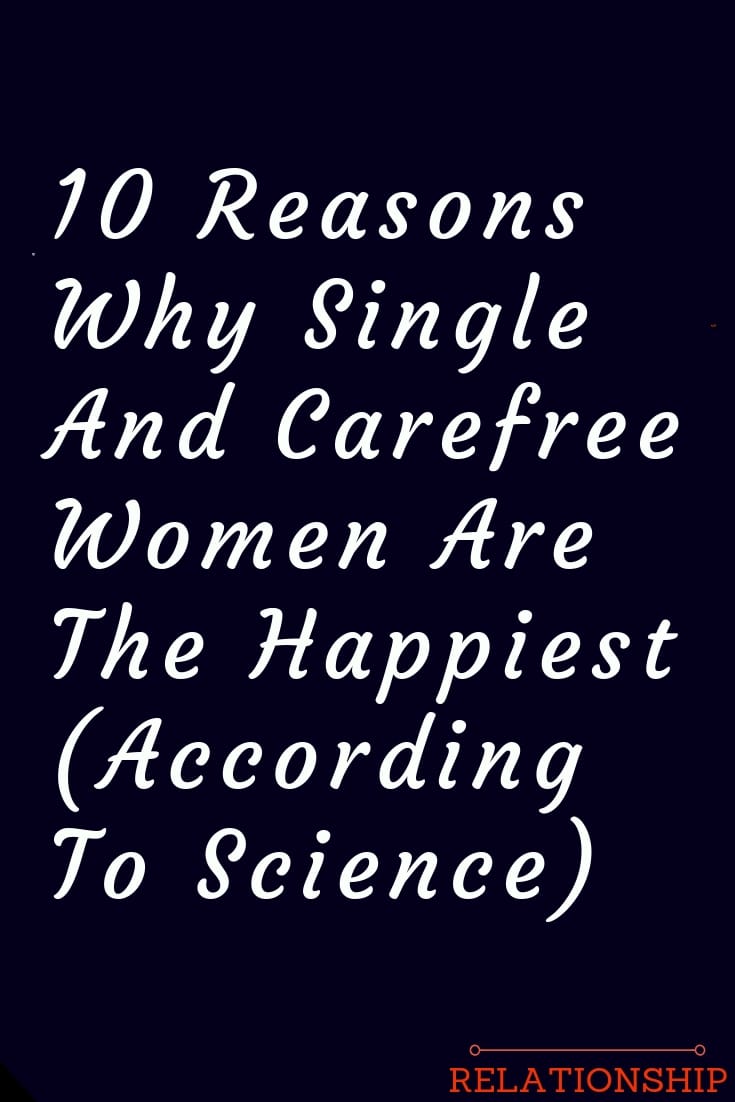 Our society has taught us that getting married and starting a family is a must if we want to be genuinely happy. There’s this whole sequence of things that you should achieve if you want to reach your happiness. Finish your school – find a job – get married – have children.

But is this really true?

Do we really have to blindly follow this cliché agenda in our pursuit of happiness? I think not, and the scientists have confirmed it, too. Apparently, single and carefree women are the happiest ones! Yup, believe it or not, single women have been ruling for some time now, but we were just too blind to see or admit it.

You probably have a friend who is “single and killing it” and likely thought that it is a coincidence. Well, it is not. There are some perfectly valid reasons behind it. To be exact, there are 10 reasons why single and carefree women are the happiest!

1. Women don’t see the same benefits as men do when “settling down”

Women and men are totally different in terms of emotional and physical maturing. Most men mature and become a whole person once they meet “the one” and decide to settle down and work on their relationship or marriage.

Contrary to them, women don’t see the same benefits once they settle down. They claim that the healthiest and the happiest population are those women who never married or had children, which means that for women there’s no really need to rush into a relationship because they will not be happier once they do.

2. They have a strong streak of independence

Many women yearn to be in a relationship because they feel like they are missing something. They think that establishing a healthy and loving relationship will help them reach the ultimate happiness. However, this is just a misconception.

Single women know they don’t need a partner to feel happy and fulfilled. Single and carefree women are their own bosses and are highly independent. They choose where they want to go, when they want to go, and how.

They choose their hobbies and don’t worry that they will not have enough time for it. They are the creators of their own happiness.

3. They have more time to focus on themselves

4. They can pursue their ambitions more easily

Single women don’t have these problems. They set their goals and they instantly start working on them, not worrying about what their partner or others will say. And when a woman is determined, she can achieve just about anything.

5. They get way more sleep

Yup. Single women get more sleep, which equals being happier. They don’t need to try win middle-of-the-night duvet wars or worry about snoring or fighting to have some space in bed. And they don’t need to jump out of bed every time they hear their child crying and whining.

Single women’s sleep routines are way more beneficial for their health, and it also increases their productiveness during their daily tasks.

6. They get to spend lots of time with their friends

When we’re in a relationship, the time we spend with our friends significantly decreases. We spend lots of time with our partners and because of that, we rarely find time for other people in our lives as well.

But, unlike those women who are in a relationship, single women don’t have these problems. They get to spend lots of time with their friends, which is crucial for every person’s emotional well-being. Single women who spend time with their friends are happier than the majority of those who are in a relationship (especially if it is not really functioning).

7. They don’t have to answer to anyone

Being in a relationship usually means compromising, asking for validation on certain things, and constantly worrying about your partner’s wishes and emotions. But, single women don’t do any of that. They don’t have to answer to anyone.

And the more independent you are, the happier you will be (I know it sounds weird, but it’s true). Single women don’t have to worry about coming home late or limiting themselves only to appease their partner. They live by their own rules and they are simply killing it.

Single women don’t have to worry about whether their partner has washed the dishes or taken the trash out. Petty fights don’t exist in their lives, which makes it much more simple and satisfying. When they see that something needs to be done, they do it themselves. They don’t waste their time losing their nerves and repeating to their partner that something needs to be done.

9. No jealousy issues to deal with

Jealousy is an inevitable part of every relationship and it can really influence our pursuit of happiness. Your relationship can seem perfect, but even the smallest act of jealousy can disturb the balance and cause unnecessary stress.

Single women don’t have to deal with this. They don’t have jealousy issues that will only drain them and force them to constantly overthink their actions. They live carefree, which is the main ingredient for happiness.

10. They’re not worrying about whether this guy is “the one”

Single women don’t give a damn about whether this guy is “the one” or just another asshole in a sea of toxic men. They don’t waste their time contemplating about their perfect man who will sweep them off their feet.

They live in the moment. They see happiness completely differently from others and they certainly don’t worry about their love life. They have other more important things to focus on and relationships are just not on their priority list.

Signs You Are Experiencing A Twin Flame Union

To Every Girl Who Thinks She Is Hard To Love

The Best Revenge Is To Move On

If He Really Wants You, He Will Chase You

Today’s Daily Horoscope For Each Zodiac Sign: Saturday, May 30, 2020

110 Science Pick-up Lines That Will Make Your Crush Smile

ThoughtCatalogs - October 15, 2019 0
Women like smart men. Period. But they like men who can make them laugh even more. They simply want someone who can break the...