Libras are eternal optimists and fighters for justice. It doesn’t even matter if they know the person they are standing up for.

Libras are going to act the same whether it’s their friend or a complete stranger they are fighting for.

The principle is at stake and justice, too When it comes to Libras, the only important thing is for justice to be served.

That’s the main reason they are so driven to help others.

Libras are not selfish, and they almost always put other people’s feelings before their own.

They will go out of their way to make someone happy. That’s why Libra sits on the throne of niceness as an absolute ruler.

Pisces hate conflict, and you’ll rarely see them arguing with someone.

It’s not that they don’t have anything to fight about, but they prefer to walk away than stay in a conflict situation.

Like Libras, Pisces are not selfish, and they help others out of the pure goodness of their hearts.

There is never an ulterior motive hidden behind their good actions. They never put their own well-being above someone else’s.

Anyone who has crossed paths with a Pisces will tell you how kind and gentle they are.

They genuinely care about others, and if they see someone needs help, they’ll stop at nothing until they do anything in their power to assist.

Despite their reputation as hot-headed and stubborn, Taurus is actually much deeper than that.

They are very patient when it comes to other people.

They are helpful, and they will never criticize someone because they know criticism can sometimes sting.

Their generosity is their most beautiful quality.

If you were a complete stranger and you needed something from a Taurus, they wouldn’t turn you down.

Despite the fact that Taurus is extremely patient with others, they can crack if you totally piss them off.

That’s a pretty hard thing to achieve, but it’s possible. If that happens, Taurus turns from nice to nasty in a matter of seconds.

It’s not easy to get Taurus to lose their control because they keep their emotions to themselves.

They rarely express them and keep them bottled up. Once you open that bottle, run for your life because all hell will break loose.

Aquarians don’t tolerate mean and selfish people. They don’t have the time for talking behind someone’s back or being mean to anyone.

Life is too short for that BS.

Aquarians are not all over the place with their nice attitude, but when they meet someone for the first time, they will try hard to really get to know that person.

People born under this sign don’t like to talk about themselves. They prefer to hear about others.

Making friends is what they are really good at.

If you have a different opinion of Aquarians, then you must have caught them on one of their rare bad days.

If they sense you’re taking advantage of them, they are going to turn into unpleasant enemies.

Sags are nice in general, but it’s not because they are like that by nature. It’s because they avoid negative people and weird situations.

Conflict is just not their cup of tea, and they are way happier living without it.

They don’t judge others for their behavior, and they have nothing against them.

Their life motto is: “Leave me alone in peace; you go hate all you like, but far away from me”.

Their motto is perfect for someone who wants to keep their life cool and stable.

Gemini have an inner bitch hidden deep inside of them. There are two sides to a Gemini.

On the one hand, they are super outgoing and very easy to talk to, but on the other hand, they like to talk behind people’s backs and cause awkward situations.

If you want to provoke their mean side, just confront them.

If you’ve heard they’ve been spreading rumors about you, tell them to their face, and see what happens.

Do you think they will apologize in a nice way begging you to forgive them?

No, they will yell at you and accuse you of being a liar which will only make things worse.

In other words, Gemini are nice when they want to be, but if you catch them doing shady things, they will go mean on your ass right that second.

If there would be a Zodiac synonym for moodiness, then it would be Cancer. With them, you never know where you stand.

If they have a good day, then they will be at their best behavior. They will love and hug you, and you’ll get sick of all that love.

If you catch them on their bad day, you better watch out and find a place to hide because they won’t carefully choose words to insult you with—they will throw everything they have in your face.

That state they fall into is not exactly meanness. Cancers are very sensitive and emotional people.

Every emotion they feel, they have the need to show.

Cancers are fine with other people acting and hiding their emotions, but…but burning inside, a Cancer will honestly show how they really feel which most of us see as being mean.

And on the plus side, they aren’t being mean on purpose. They are really trying to be nice. It’s just they fail at that almost every time.

Someone as passionate as Leo cannot control their feelings and especially their reactions.

Leos won’t choose their words to hurt you on purpose. Their words find their way out somehow.

They aren’t even aware of what they are capable of saying and doing when they are angry and how it hurts the person on the other side of the conflict.

Note: If you really want to piss off a Leo, and you better not, then you’ll definitely see their mean side, and you’re not going to like it.

Virgos are actually the exact opposite of what their name suggests. They are not innocent at all.

Maybe that’s the first impression you get when you meet a Virgo, but upon detailed analysis, you realize Virgos are actually pretty mean.

Virgos are great actors, and they can continue their act for a long time.

The only problem which gets to them every time and exposes their mean behavior is that small stuff gets on their nerves.

So, if a lot of these insignificant things happen consecutively, they lose it and crack.

In those situations, a Virgo will hurt you on purpose, but you won’t notice it at first. They will wrap a mean comment inside a few compliments. That’s really one sneaky thing to do.

Impatient, aggressive and headstrong – three words which you can use to describe an Aries.

Although, if you ask them, they’ll tell you they are passionate which is total BS.

There is a huge difference between being passionate and not giving a damn about anything.

But what happens is that Aries cannot control the feelings bottling up inside, so they crack.

In this way, Aries get whatever they want using the excuse that they are assertive when actually, they are just mean.

Mean is Capricorn’s second language. They will be perfectly fine until you piss them off. If you do something they don’t like, prepare for war.

They won’t scream at you nor try to hit you. No, their technique of hurting someone is much more devious.

Their favorite method of getting even is doing things behind your back and acting like everything is perfectly fine.

This happens if you really got them angry. If you did something not so serious, they will just act cold and distant.

Either way, a Capricorn always knows when they are being mean—nothing happens without a reason if you ask them.

And finally, the absolute rulers of meanness or bitchiness, if you will, are Scorpios.

If you do everything they want and never object to any of their decisions, sure, they can be nice.

The moment you disobey the rule ‘always listen to a Scorpio’, you’re in for a vengeful ride.

If you messed up and you sincerely want to apologize for your behavior, they will ignore you and act like you’re not even there.

You can get down on your knees, but they won’t have it.

If you didn’t mess up and managed to explain what happened (congratulations to the ones who’ve succeeded), they will apologize for blaming you. 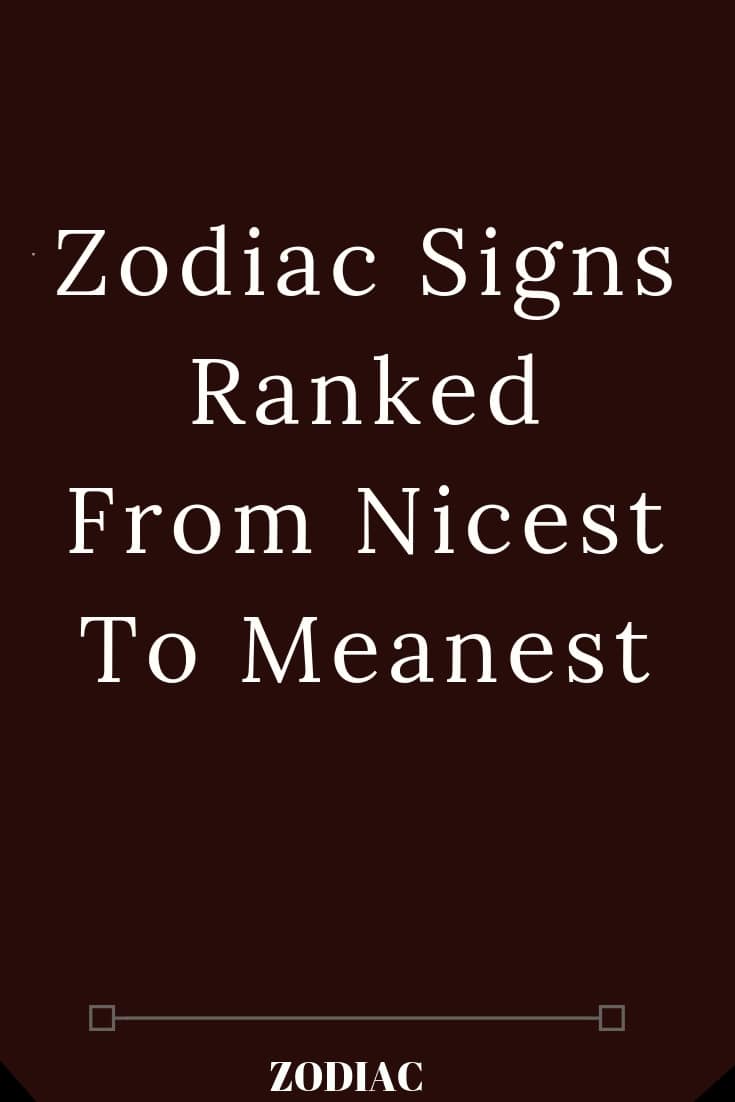 These Are 6 Overthinkers Of The Zodiac, Are You One Of Them?

This Is Why He’ll Fall Out Of Love With You, Based On His Zodiac