This zodiac sign is all but bitchy. They always act like little angels who are caring and loving—the last thing they want to do is make other people suffer. Whenever a problem occurs, they will do their best to make everyone else happy, even if that will mean they are not happy at all. So before you put blame on them, ask yourself a question: “Who is the real bitch here?”

Just like Libra, Pisces are real peacemakers. If you start a fight with them, they will just ignore you and leave because hurting others is not their cup of tea. They are sensitive, soft, and real friends, so there aren’t a lot of situations in their lives when they actually fight with someone. Believe it or not, everything is always cool with them, so don’t bother to make them angry because you won’t get what you want.

Even if you think a Taurus woman is all bitchy, that is not true. She is not dangerous at all. On the contrary, this woman is sensitive, loving, and caring. She will give her last dollar to a stranger in the street if they need it. She is tolerant enough to get over some bumps on the roads but if you cross the line of her tolerance, you better watch out.

This zodiac sign is known for being patient and kind. They simply don’t like mean and cruel people in their lives, so no matter how awesome you are, Aquarius women won’t talk to you. She doesn’t see any point in being bitchy but she knows how to stand up for herself. So be careful how you talk to her because even if she respects others, she respects herself more.

Although they have a tendency to be impatient and restless, Sagittarius women won’t let aggression lead them. The truth is they hate living in an unfair and cruel world but if you do something bad, they won’t lose any time on you. They will just listen to all that bullshit that you have to say, turn their backs, and leave the room. That’s how they will show you that they have everything under control and that leaving was their decision.

This zodiac sign is easygoing and kind most of the time. But they also have some pros and cons. The bad thing about Geminis is that they like to gossip a LOT! No matter if rumors are true or false, they will tell them to anyone from their circles of acquaintances. This characteristic makes them bitchy although they are not aware of that. If they just could keep their mouths shut for a moment, that would be great. But you know, that is a mission impossible!

Depending on their moods, Cancers can be bitchy or totally sweet. If you catch a Cancer lady in her good mood, she will compliment you from your head to your toe but if you catch her in a bad mood, watch out because she is spitting fire. That’s the way that cookie crumbles!

A Leo woman is all about loving, forgiveness, and sweetness. But don’t judge the book by its cover. She can pretend to like you but inside, she can think that you are a real bitch. So don’t try to confront her because even if she looks like an innocent puppy, she has a heart of a lioness. And you can be positive that she won’t think twice to take revenge on you when you least expect it.

Ohh this zodiac sign is a real actress. She likes that form of passive-aggressive bitchiness, and she will never speak out loud what she thinks of you. When you meet her, she will tell you how amazing you look today, giving you all the nicest compliments. In the end, she will ruin all that with her comment: “It was about time!” If this is not bitchy enough, I don’t know what is?

If you ask people about Aries women, they will all tell you how lovely, sweet, adventurous, kind, and caring she is. But don’t buy that shit. She is just wearing a mask so people would like her. In fact, she is a totally crazy bitch, so if you do her any harm, she is capable of tearing your head off. After you read this, I suppose you don’t want a piece of her, right?

A Capricorn woman is smart when it comes to bitchiness. If you harm her or her family, you don’t need to worry that she will scream at you or punch you in the face. She is smart enough to wait for the right moment when she will give you a punch in the stomach, after which you will faint, wondering what has just happened. She is calculated and this is one of her biggest flaws. This is how she tells people that she is a real bitch, so watch and learn that you shouldn’t mess with her.

Tadamdadam… last but not least, the queen of bitchiness, her Majesty Scorpio! This is a woman you don’t want to mess around. They always act bitchy, so you better watch your behavior in front of them. If you do some harm to them, be prepared for a revenge worthy of a serial killer. She will make your life miserable, and she will even haunt you in your dreams. Do you really need this? 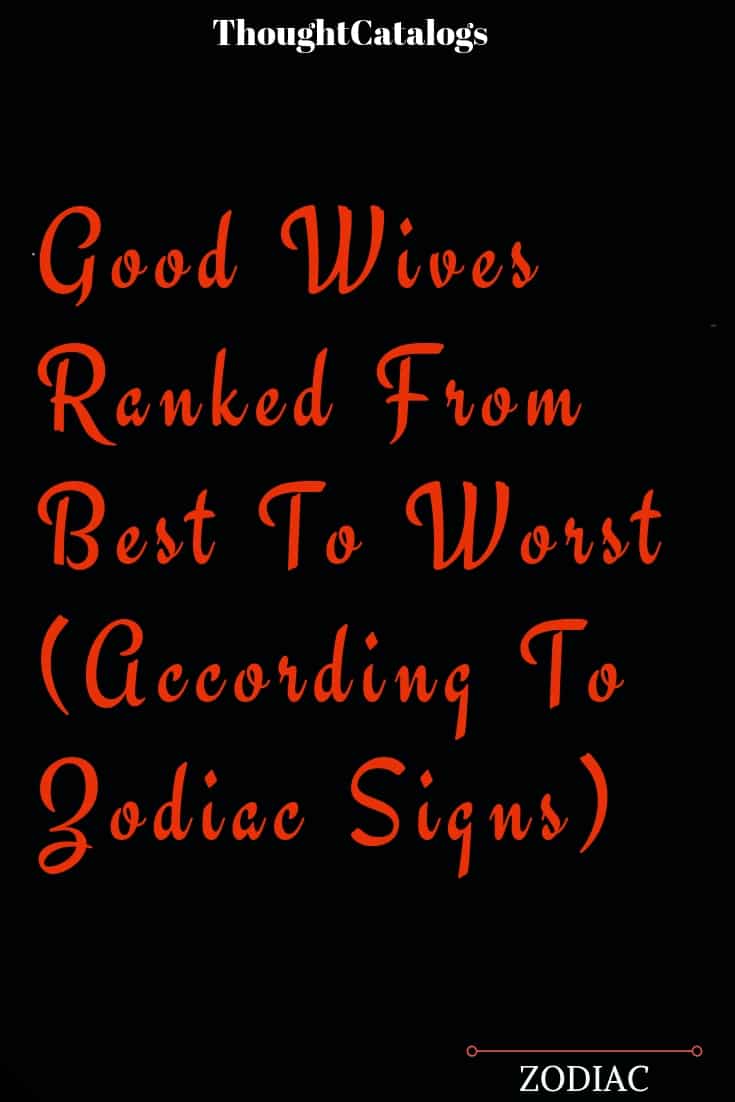 Good Wives Ranked From Best To Worst (According To Zodiac Signs)