Being loyal is much more than just being faithful. It is being one hundred percent committed and devoted to your romantic partner. It is sticking with your promises, having your loved one’s back at all times and never abandoning them when they need you.

Loyalty is one of the most important qualities we all look for in our potential romantic partner and we’d all like to know how loyal they actually are right from the start. Well, we are giving you an opportunity to do just that because you are about to read the list of all zodiac signs ranked from most to least loyal in a relationship.

If your romantic partner belongs to this zodiac sign, congratulations, because you’ve hit the jackpot. You can be almost one hundred percent sure that they won’t cheat on you in any way, because Cancer is without a doubt the most loyal of all zodiac signs.

This sign usually has a hard time finding their perfect match but once a Cancer falls in love for real, they never invest halfway. Instead, this is the sign which will give you their entire self, without expecting much in return.

Scorpio is known to be one of the most jealous and possessive signs of the entire zodiac. Nevertheless, they are also one of the most loyal people you will ever meet. And this doesn’t just go for their romantic relationships—Scorpios are loyal friends and employees as well.

One of their best relationship qualities is the fact that Scorpios never give up on the people they love. They are not the ones who will abandon ship but instead the ones who stay until the end to fight for you with their life.

Some of the main personality traits of every Taurus are their stubbornness and decisiveness. They are not people who give up easily once they set their mind to something or someone and that makes them a loyal sign.

If Taurus left their partner hanging, they would consider that to be their own personal defeat. It would mean that they’ve failed in following through with their decision and for them, it would be a sign of their weakness.

Being an earth sign, Virgo likes to keep everything real and tidy. They don’t like playing games and are usually stable and loyal when it comes to their relationship.

When a Virgo makes a vow and promises to stick with you through rough times, be certain that they’ll never back out on you. This is the sign that stays next to their partner through good and bad days, through thick and thin and through sickness and health.

It is a known fact that Leos have a huge ego. This is the sign that can’t stand someone insulting or belittling them in any way.

Nevertheless, this doesn’t mean that they enjoy putting their partner down just so they could feel superior to them. Instead, a Leo wants their romantic partner to have a good reputation as well and is ready to do whatever it takes to make that happen. They will always stand with their loved one, being ready to defend them against every possible force.

Contrary to popular belief and despite being a water sign, Gemini is actually a pretty loyal zodiac, when they are in a long-term relationship. The truth is that Geminis like playing games and enjoy the chase, which usually makes people think that they are the one who can never settle for real or get themselves involved in a serious relationship.

However, the truth is quite different. Yes, Geminis need time to find someone who is worthy enough for them to give up their single life but once they do, everything in their life changes. Once they grow to love someone for real, they become completely devoted to their relationship and turn into a committed and loyal partner in no time.

What prevents Libra from being one hundred percent loyal to their partner is their indecisive nature, which often causes them to act inconsistently in a relationship. The truth is that you can expect everything from a Libran—they can act completely committed one day and then just disappear the next, as if you never mattered to them.

Capricorns have a habit of carrying all of the emotional baggage from their former relationships with themselves. This is the sign that once gave too much to the wrong people and that cost them a lot.

All of this trauma they went through in the past destroyed their capacity to commit to new people. Their biggest mistake is the fact that they think that everyone will hurt them the same way their exes did, which doesn’t allow them to be completely loyal to their partner. The truth is this zodiac has a habit of punishing new people for the mistakes people from their past made.

Aries is a zodiac that follows their emotions, no matter what. They will always do so because they put them above all the principles that lead them in life.

Don’t get me wrong—this doesn’t mean that an Aries isn’t capable of being loyal at all. It just means that they won’t have trouble walking out on their long-term relationship if it happens that they fall for someone else. No, they won’t be unfaithful to their romantic partner but their sense of duty won’t cause them to stay in a relationship which doesn’t make them happy either.

People of this zodiac are always looking for excitement and they can’t stay in one place for a long time. The same goes for people they get attached to—Sagittarius quickly loses interest, which makes them go after someone new to challenge them emotionally.

All of this combined means that Sagittarius is not a very loyal or faithful zodiac. Their free spirit controls them and makes them constantly chase new experiences and people.

A committed relationship usually causes Sagittarius to feel caged and trapped and they are a sign that can’t stand not being completely free. Ironically, the biggest problem with them is that they will probably be the most loyal to the ones who don’t try to limit their liberty.

Pisces is usually in love with the idea of love and that is what brings them the most trouble when it comes to loyalty. This sign is addicted to butterflies and the excitement they feel at the beginning of a relationship.

However, once the honeymoon phase is over, Pisces gets bored and they want a way out. All of a sudden, they feel stuck and all they want is to fly out of this cage called a serious relationship.

When it comes to the least loyal sign in the zodiac, Aquarius is a definite winner. This is the sign which has a fear of exposing their true self and showing their vulnerabilities and weak sides, no matter how deeply they care for you.

The truth is that Aquarians have very high standards and strong deal-breakers, which makes them very careful about the one they give themselves to. In fact, they don’t give a damn about most people in their life and they only have a small circle of the ones they truly love.

Nevertheless, all of this doesn’t mean that an Aquarian doesn’t have what it takes to be loyal because they can devote to the one who they consider to be worthy of their commitment. 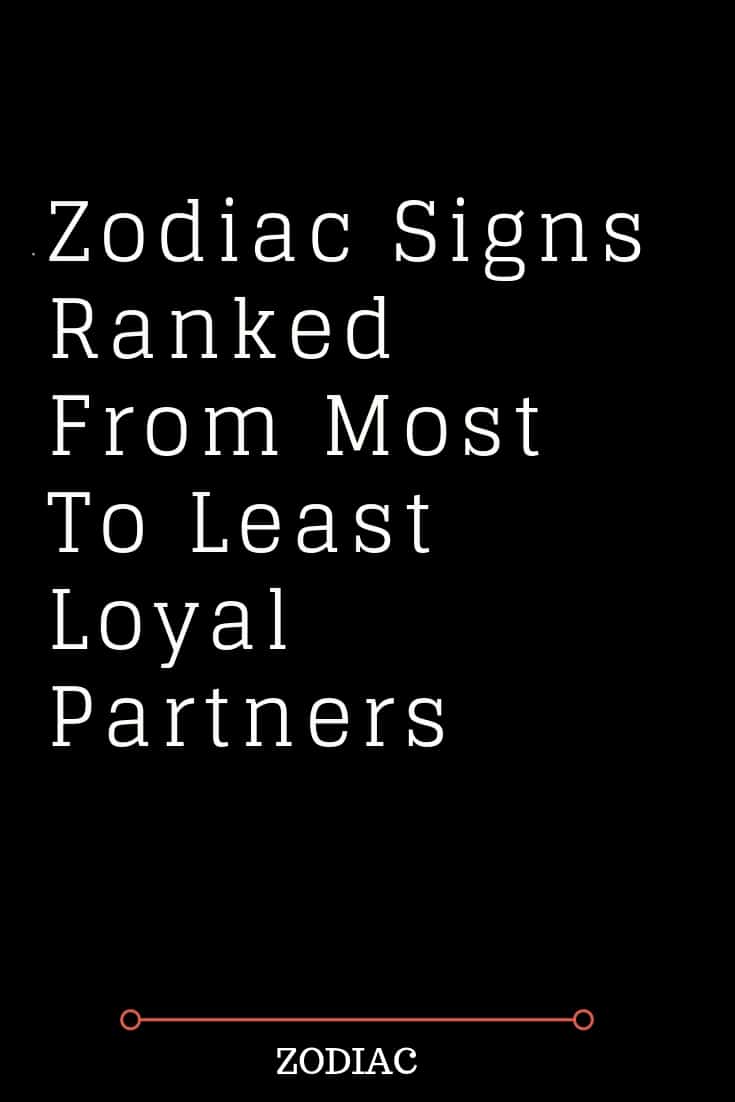 These Are The 4 Most Lovable Zodiac Signs