Aquarius and Pisces are two zodiac signs that don’t make a classic couple.

Aquarius is an air sign, Pisces is a water sign, and it’s said the two don’t go well together.

I’m the one to disagree and prove them wrong.

There are many reasons why Aquarius and Pisces can make a great couple and here’s a glimpse of it before we dive deep into explanations:

They’re both understanding of universal truths better than any other signs, and they’re both great thinkers and very creative people.

Moreover, when we only consider sun signs, there’s a lot of potential clues left unsaid.

Pay attention to your other placements too, especially your ascendent and your moon sign.

It’s no coincidence that Aquarius and Pisces are coming one after another.

There’s a reason behind the current order of the horoscope signs.

The structure of the zodiac parallels the stages of the human life cycle.

For example, Aries being the first sign is the infant of the zodiac (self-motivated, unconcerned with approval or acceptance, energetic).

Virgo in the middle is a young adult (adapting to life, developing basic skills).

Meanwhile, Aquarius and Pisces are both representatives of old age and, in a certain sense, the end of a cycle or even death.

Aquarius corresponds to the life period of the seventies in one’s life.

That’s the period when people let go of their life long identifications and make radical changes.

After that comes the Piscean age. Pisces represents gradual disintegration and coming back to the source; they represent a full circle.

That’s the one thing many don’t know about and you won’t find it in a daily horoscope.

Consecutive signs often share traits, but more importantly, they complete each other specially and symbolically.

Love compatibility: A love match made in… the vastness of space?

An Aquarian woman likes to feel independent, no matter the circumstances, even when in a relationship.

She needs to feel free and intellectually appreciated to truly consider someone her long-term partner.

She’s not easily impressed with anything material, which is great news because Pisces man doesn’t care about material things either.

In order to win over an Aquarius woman, you need to challenge and stimulate her mentally and, most importantly, prove her you’re her friend before anything else.

After that, she commits entirely. And that’s a big thing, since Aquarians don’t like making promises or tying themself down and neither do Pisces.

However, Pisces have a more romantic attitude and can convince themselves they’re doing something right when in reality that’s not the case.

Aquarius woman can sometimes be too harsh for Pisces man.

Women in this sign are very blunt when they decide to speak up, unlike Pisces who are always trying to comprehend everything at once and end up confusing themselves even more.

Luckily, they are open enough to always welcome different points of view and advice.

They are very captivated by each other and their relationship can be quite dreamy.

At times Pisces will feel underwhelmed by the lack of affection Aquarius woman shows, while she may be irritated by Pisces uncertainty and vague judgment.

Pisces woman is often described as a sweetheart or overly clingy, while Aquarius man is rather distant and guarded.

Both of them are the most likely introverts who don’t like group activities, so one-on-one conversations will help them bond despite their differences.

And I can bet that Pisces Aquarius conversations are something worthy of hearing; probably an interesting blend of science fiction, spirituality, civil rights, anthropology, and what not.

Pisces woman may be infatuated by Aquarius man because of his cold demeanor and sharp intellect.

On the other hand, Aquarius man might find a Pisces woman very endearing and welcoming.

Nevertheless, the initial attraction between them can soon become the source of their insecurities.

Aquarius-Pisces relationship may not be the most compatible sign match ever, but they are for sure one of the most interesting.

Aquarius’ compatibility with Pisces, in terms of s*x, is high if both sides turn off their overthinking and turn on their love of exploration and adventure.

Not all s*x has to be passionate and romantic in a traditional sense, but that’s what’s considered in most of the compatibility score tests.

It can be exciting and eye-opening in other ways. It’s possible that during this relationship both signs find out something new about themselves.

Fortunately, they’re both open-minded and won’t shame their partner for their newly found s*xual habits.

When Venus (romantic love) and Mars (s*xual drive) bless these two signs, they’re in for a good time.

Pisces are not so often mentioned in the same context, but are recognized as revolutionary in some other fields such as spirituality and religion.

Together they bring new narratives for new generations. They are the ones who change the course of history.

Bonding over dreams of unity and love

The image depicting the Aquarius sign is the water bearer.

In tarot, Aquarius corresponds to the card of The Star that shows the naked woman holding two containers of water: one in her left hand (the subconscious) and one in her right (the conscious).

Pisces sign is illustrated by two fish swimming in the opposite direction while the corresponding tarot card is The Moon.

In short, the water bearer is giving the fish space to swim; together they create a chance for life to flourish and manifest Piscean subconscious and abstract into Aquarian conscious and concrete.

Both of them are the biggest dreamers of the zodiac and they dream of humanity uniting in love and mutual understanding.

Humanitarian in nature, they’re great healers on the mental and physical planes.

Determination in making the world a better place is something that bonds them together, along with interest in non-materialistic things and finding similarities inside different human experiences and conditions.

How to overcome differences and welcome understanding

After all that has been said, I want to encourage you to trust your intuition more than anything.

Searching confirmation signs for an Aquarius relationship with Pisces (or Capricorn, or Libra, etc.) or vice versa won’t help if you ignore your inner voice.

Most of all, astrology isn’t about predicting, as many say, it is but rather about making unconscious things conscious and acting accordingly.

It’s about taking responsibility, not blaming something else.

Your relationship will work if you want it to work. If you put enough effort to understand the other person, you’re going to unlock something that’s called unconditional love.

And that kind of love doesn’t separate. It doesn’t see zodiac signs as different but connected. Luckily, Aquarius and Pisces know that best.

A general overview of the signs and their characteristics

Aquarius (January 20 – February 18) is an air sign with fixed quality (along with Taurus, Leo, and Scorpio).

What does that mean? It means they are the ones who get things done, the ones you can count on.

Down to earth and stable, fixed signs are trustworthy and ready to set up a solid goal or base and then start building.

On the other hand, Pisces (February 19 – March 20) is a mutable water sign – along with Gemini, Virgo, and Sagittarius.

Mutable means they are adaptive and understand the importance of change.

Planets ruling the sign of Aquarius are Uranus and Saturn.

Uranus symbolizes eccentricity and new perspectives while ruling over destructive changes – a trait it shares with Saturn who also rules labor, construction, authority, and time.

Without destruction, nothing new comes in. When new comes in, it’s time for Neptune and Jupiter, rulers of the Pisces, to take things over.

Neptune represents our subconscious mind. It is associated with dreams, psychic abilities, inspiration, and illusion.

It is also associated with intuition and spiritual enlightenment, as well as compassion.

Jupiter is often seen as the biggest beneficiary among the planets and a bringer of luck.

It’s linked with thinking, an abstract mind, and higher learning.

It gives a desire for exploration in a spiritual and intellectual sense.

How does all of this interconnect regarding Aquarius-Pisces compatibility?

Jupiter and Saturn are the biggest planets in the solar system.

Jupiter is a teacher in a classic sense; understanding and good-natured it rules over exploration and expansion while Saturn is a strict and authoritative teacher who teaches us discipline and hard work.

However, they have something in common – they’re both teachers of undeniable truths of life and have the biggest effect on our lives. 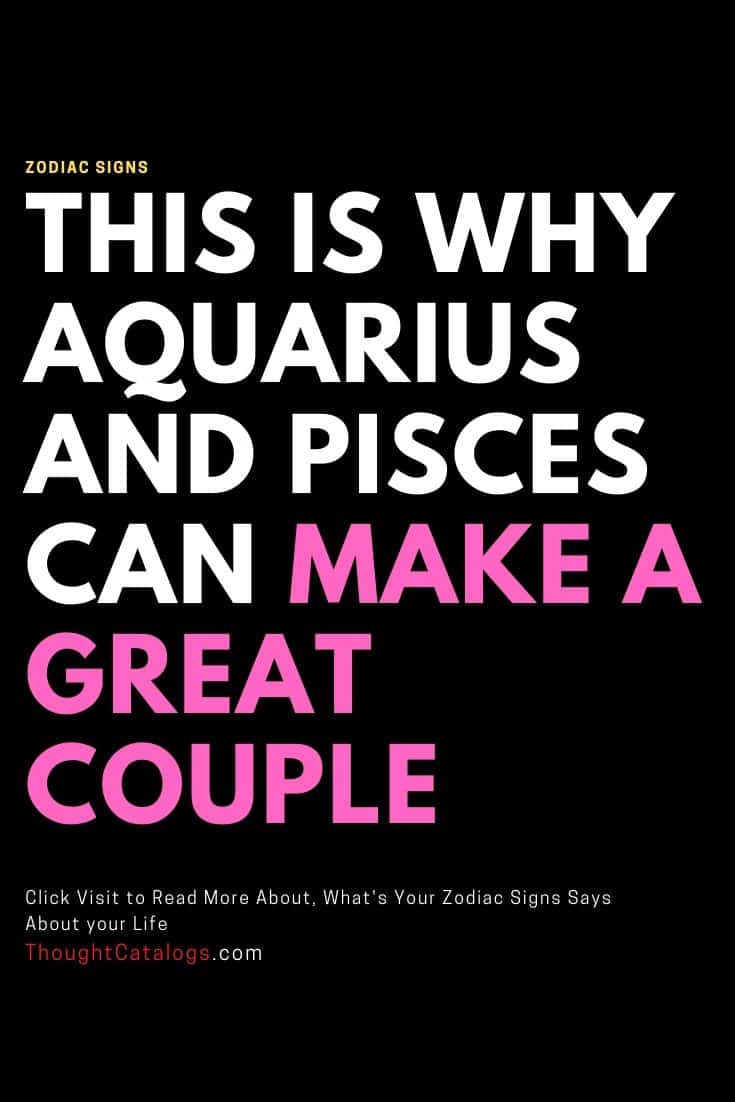 SIGNS YOU’RE IN LOVE, BASED ON YOUR ZODIAC SIGN