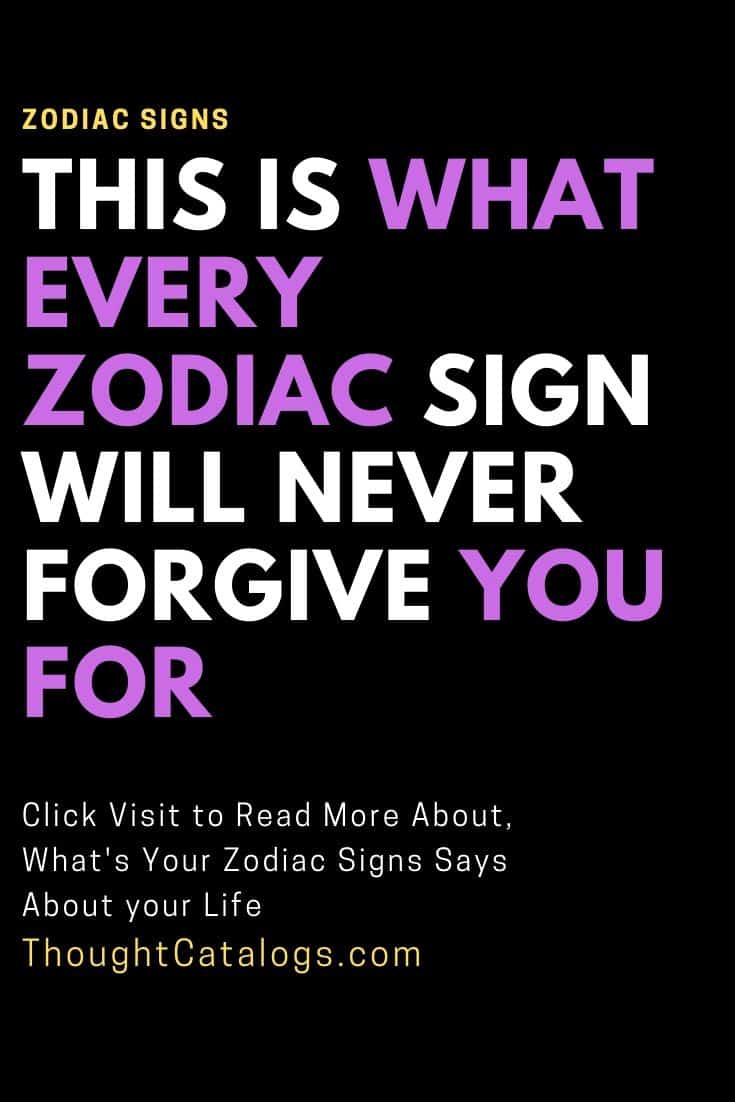 The one thing an Aries will never be able to forgive anyone is leaving without the proper goodbye.

They don’t have a problem with abandonment or breaking up a relationship. They are firmly grounded and all grown up to handle anything.

Another thing is leaving them in the dark without any closure.

That is insulting and hurtful; that is something they will never forgive you for. If you ever cared about this person, please at least have the courtesy to let them know what is happening.

The one thing a Taurus can’t handle is a joke at their expense. You can do whatever you want to them.

You can fight them, call them a liar, but if you make fun of them, then you’ll have another thing coming.

Taurus doesn’t like to be put on the spot. If you take them out of the group and try to make fun of them in front of others, then you’ll seriously regret your decision.

They will never forgive you for that sneaky move you’ve made.

Gemini don’t like people who are not supportive. When faced with negativity, Gemini gets extremely defensive.

If you show any doubt in what they are doing, they will forget you ever existed. You might as well be dead to them.

Gemini’s point of view doesn’t even have to be the right one, but if you insult their idea and their perspective, they will never be able to forgive you.

Cancers are very family-oriented and therefore very sensitive about anything related to the people they love.

They are also protective and extremely devoted. You would really have to screw things up to insult a Cancer.

With that in mind, if you really want to hurt a Cancer, go after their family.

You will do more damage that way than hurting them directly. They themselves are last on their list of priorities. The top spot belongs to the people they love.

The one thing no Leo could ever be able to forgive and forget is disrespect. Leos are, as you might have predicted already, very proud beings.

They have the qualities of good and righteous leaders, and they are led by doing the right thing—at least, most of them are.

So, if it occurs to you to try and undermine their authority or disrespect them in any way, it’s not likely they will be able to forgive you.

Virgos are very competent and ready to solve any problem at stake. There is no situation to which they fail to find the solution.

Luckily, they are intelligent enough to find the answers to everything they encounter.

In some cases, it even represents a challenge they are very eager to solve. In other words, it’s their kind of fun.

Virgos are very well aware of their abilities, and they want others to respect that.

They want people to trust them, and truth to be told, they deserved to be trusted solely on the basis of their success in the past.

If you start questioning their abilities, they will never be able to forgive you.

Libras are always the life of every party.

They are funny, and they know how to keep the conversation interesting and all the people in it comfortable and relaxed. Libras really care a lot about their friends and social life in general.

The thing they will never forgive is rejecting them from your presence.

But there is another beautiful quality they have—they will never make people around them aware of the problem and the fact that they are being ignored.

They will endure until the end and only later on…they will grieve alone.

Once you have a fallout with a Scorpio, it’s unlikely they will forgive you.

You’re lucky if they don’t come after you because they are quite vengeful when you hurt them—especially if you betray them.

In conclusion, it would be better for anyone if you just don’t mess with a Scorpio.

And this is a serious warning—Scorpios can really become dangerous enemies just as they were loyal friends.

Sags are pretty straightforward and simple. In other words, Sags hate unkind people. It’s as simple as that.

Whether somebody is unkind to a person or to an animal, it makes no difference. They will hate that person with the same intensity.

Basically, if you’re a jerk, Sag will hate you, and they will never be able to forgive you for being an asshole.

But, on the other hand, if you are an asshole, you didn’t have a better thing coming anyway.

The thing every Capricorn hates the most is being manipulated. Such strong-headed beings like them are impossible to control.

In other words, it’s better not to even try to get them doing something they don’t want to because you’ll fail, and they will always hold a grudge (It’s possible they will even pretend they have forgiven you when actually they have not.)

Deep inside, they think that manipulative people don’t deserve a second chance at all.

It seems to them there is no point in forgiving someone who will do the same thing to you all over again.

Like most of us, Aquarians want to be surrounded by trustworthy people.

But unlike others, Aquarians need other people’s support. It gives them energy and the will to keep going in whatever they had in mind to achieve.

If someone stabs them in the back, they will never be able to forgive them.

It’s even more likely they will cease all contact with them and ignore them for life.

Pisces hates when someone creates a negative picture around them.

They know they are not perfect, and they are not trying to deny it, but if someone continues and makes everyone around them realize their every mistake, a Pisces will definitely lose it.

It’s even possible that Pisces is a bit too sensitive when it comes to criticism, but we all know where to draw a line between something constructive and simply hurtful.

Pisces knows it, too. Don’t hurt them because they will never forgive you for it.

How Each Zodiac Has Changed Since The Start Of 2021

How to Instantly Have a Better Day, Based on Your Zodiac Sign

ASTROLOGICAL COMPATIBILITY: THE 7 TYPES OF RELATIONSHIPS In 2020

Should You Date Someone With The Same Star Sign As You?

ThoughtCatalogs - June 22, 2019 0
1. Taurus There is no man who can resist her charm, beauty or strength. This woman is always the loudest person in the room while...