There is nothing wrong with knowing what you want and not being afraid to get it.

Nothing wrong with going after the one our heart desires and fighting for love.

However, there is a thin line between trying with dignity to win a man over and hurting yourself while doing so.

A thin line between taking matters into your own hands and humiliating yourself while trying to make him love you.

So, what exactly is the point in which it’s time to end things? The moment when you should give up on chasing him for good?

Give us your zodiac sign and we’ll tell you.

The point in which you should stop chasing the guy you like is when it becomes exhausting and tiring, instead of exciting and adventurous.

I know you love the thrill of the chase but the moment it becomes a routine, it’s time to call it quits. Remember—the last thing a chase should be is boring.

If you’re wondering when to stop chasing a guy, the answer is: when he stops fulfilling your intellectual needs and stops challenging you.

As a Gemini, you should stop chasing the man of your interest when you see that you’re lowering your standards for his sake.

Without noticing it at first, you’re actually losing yourself for this man and you’re accepting some things from him that you usually never would.

The moment when you should stop chasing him is when you realize that he’ll never be yours completely.

You two might make your relationship official and he might give you the title of his girlfriend but as soon as you come to terms with the fact that he’ll never give you back the love you need and deserve, it’s time to give up on running after him.

If you’re wondering when to stop chasing the guy you like, the time to stop doing so is when this man starts holding you back.

Instead of working on your own self-improvement, you’re wasting too much energy on running after him and trying to make him become the best possible version of himself and that is clearly a red flag.

The point in which you should stop chasing the man you want is when you start seeing that he isn’t going anywhere.

You see that he’ll never become the man you need and that he’ll forever remain the immature brat he’s always been. Let’s face it—that is the last thing you deserve in life!

As a Libran, you ought to stop going after this guy the second you see that he is bringing too much drama to the table.

This relationship is turning your life into a living mess and you’ve lost all of your balance and tranquility.

As crazy as you feel about him, this is the moment to put a stop to everything.

Stop chasing him when you see that you will never be able to trust him.

Don’t lie to yourself—you could never make things work with a man who can’t be loyal and dedicated to you, despite the attraction you might feel for him.

As a Sag, the point in which you need to stop chasing him is when you see that he’ll never stop with playing these pointless games.

No matter how much you try to, you’ll never get to the bottom of this man’s intentions and you’ll never know where you two stand.You can also read our another Secrets things that make Sagittarius the most romantic partner ever

If you are a Capricorn, stop running after a guy when he starts leading you away from your goals and ambitions.

When you notice that you’re wasting too much energy on this charade that isn’t going anywhere.

When you see that you can’t focus on anything else besides having this man by your side.

Stop running after him the moment he starts diminishing your value.

The moment he causes you to question yourself and the moment he makes you wonder why you can’t be enough for him.

The moment you start changing the essence of who you are to please his desires. How to get a Aquarius Man fall for you

The moment to stop chasing him is when he starts shattering your dreams of love.

When he starts changing your perception of romance and the moment you see that you’re settling for less than you deserve. Here the secrets ways to make a strong relationship with a Pisces! 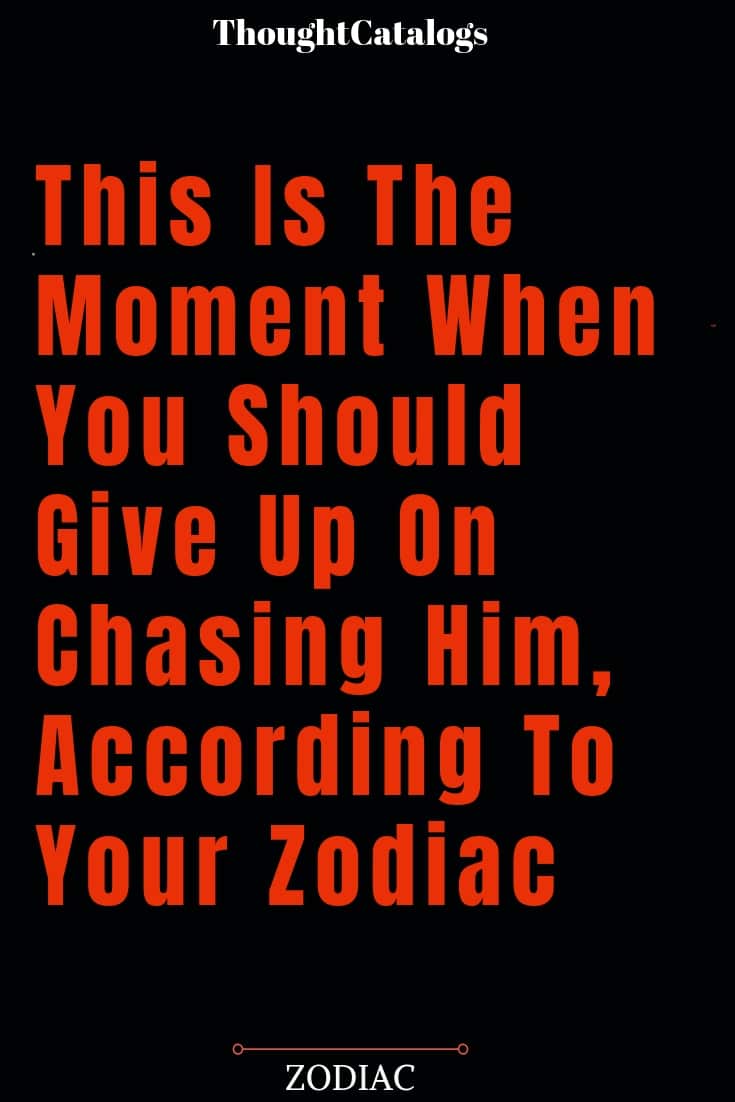 How You (and Your Crush) Subtly Reveal Who They're Crushing On, Based on Zodiac Sign