When loving a woman who is used to being her own hero, you have to be extremely careful.

She is wild and fiercely independent, so her way of ‘needing’ you isn’t exactly what you would think.

Taking into consideration the fact that she has been doing everything in her life all by herself, right now she knows that she can always go back to that, but if you’re there with her, she expects you to catch her when she falls.

She was always on her own, battling against the world, always saving herself, that’s why you should finally let her be vulnerable.

At times she will seem like she has it all figured out, but never forget that she needs gentleness and kindness more than anyone else.

Because no one is wearing her wounds but herself. Always by herself. Never trusting anyone.

If she puts her trust in you, better believe that one wrong move can make you lose her.

You won’t be losing her gradually but all at once.

She is not the type of girl who will stand around, waiting for you to make another mistake so that you can break her heart just a little bit more before she finally leaves.

No. She is the one who will walk away without an explanation.

A woman who has learned to be her own hero knows that there isn’t anyone out there to whom she is willing to give a place in her life.

This is the life she has built for herself. The life she has come to know as a life of fighting for her place and rights because there was nothing else she could have done but fight.

That’s why she won’t let just anyone into it that easily. She won’t let a man simply come into her life and wreck it all apart.

And that’s exactly the reason why she will walk away from you for the most simplest of reasons.

She believes that she didn’t save herself every time from getting broken to now be shattered into pieces by a man who thinks that one little thing isn’t bad enough to break her.

That’s why you shouldn’t even try to make her fall in love with you if you aren’t ready to give it all you got and to continue to be there for her 24/7.

If you ask me, that is exactly how a woman should be acting. We grew up and faced the most difficult times and got through them all on our own.

Why would a man have the privilege to make us cry when we haven’t shed tears through even tougher times?

But she is perfectly capable of giving herself all that without anyone having to tell her that it is fine.

You will lose her the moment you decide to take her for granted. The moment you think that a ‘thank you’ is overrated.

You will lose her instantly the moment you look at another woman passing by with that desire in your eyes.

You will lose her so fast that you won’t even know what happened between you two.

But if you look back at how you behaved or what you said, the answer will be very clear: she left because she thought that you weren’t worthy of the fight.

After so much time dedicated to being her own hero, this is her call. She has to save herself even from you—from a man who will take her for granted.

You will lose her the moment you think that she doesn’t need you to be a hero as well. Even a heroine like herself has bad days.

Don’t let those days get to her! Don’t let yourself lose her!

You will regret it for the rest of your life. 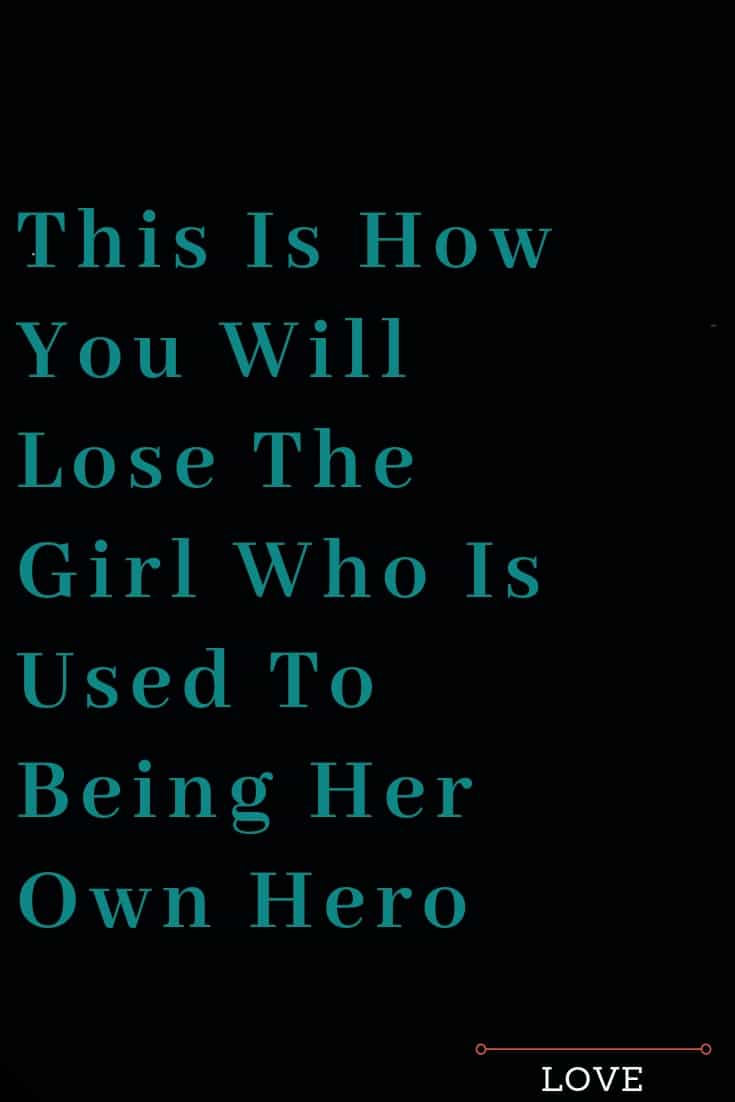 Be Brave Enough To Break Your Own Heart