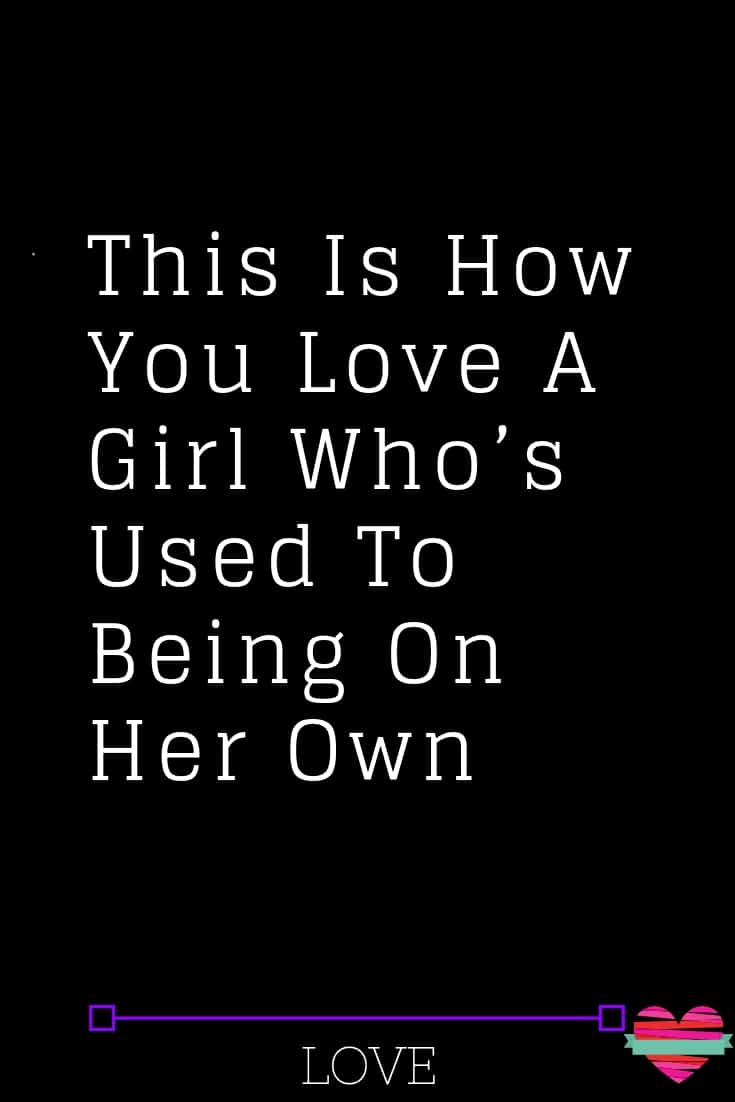 Facebook
Twitter
Pinterest
WhatsApp
Linkedin
ReddIt
Tumblr
Flip
Copy URL
Have you ever met a girl who doesn’t need anyone to complete her? A strong and independent woman who doesn’t ask for anyone’s financial or emotional support and guidance? Have you ever met a girl who is so used to being on her own that with time, she has become completely self-sufficient? If you have, you’ll know that this girl is different than any other girl that passed through your life. You’ll know how special and unique she really is. If you have ever met a girl like this, you’ll know that she is one of a kind. Don’t get me wrong. I am in no way trying to convince you that she is perfect because she is far from that. This girl is challenging, and she is everything but easy to get.   Being with this girl requires a lot of effort because she will give you a lot, but she asks for a lot in return, as well. But if you really want to love her, you’ll be patient, and everything will be worth it. The difference between her and all those other women is that she wants to be with you even though she doesn’t have to or need to. From all those men around her, she chose only you to be the one holding her hand when times get rough. She chose you to be her companion on this journey called life. She chose you to be her partner in every sense of that word. Don’t you ever think that this girl is with you just because she is afraid that she’ll end up alone because that can’t be further from the truth. She isn’t with you just to have someone around when she needs a plus one or when she misses sex. She didn’t choose you because she had no other option than to settle with the first guy which came into her life. She didn’t do it because she needed someone’s support or guidance.   She won’t be lost and incomplete without you. Her life will still have meaning even if she doesn’t have you. When she chooses to be yours, she doesn’t need you to be whole. She’ll never think of you as her other half, and she can live without you just fine, but she prefers sharing her life with you. And when a girl like this chooses you, you can consider yourself to be pretty damn special. Because she doesn’t let people in just like that. You know, she has been through a lot. Everyone she’s trusted betrayed her. Everyone she’s loved abandoned her. And with time, she learned that she couldn’t count on anyone but herself. She learned that she can only rely on herself because everyone else will betray her sooner or later.   With time, she became scared of letting someone in. She became scared that she’d get used to needing someone the same way she got used to being on her own. She got scared that she’d get used to having someone to have her back through thick and thin. Scared of getting used to having someone to catch her when she falls and someone to pick up her pieces whenever she breaks. This girl has spent years building strong and thick emotional walls to protect her heart. And if you plan on tearing these walls down, be ready to stay. Don’t do it if you will break her heart, assuming that nothing can hurt her. Don’t enter her life if you don’t plan on becoming a part of it. Don’t do it if you plan on walking away at the first hint of trouble. Don’t make her fall for you if you can’t commit to stay with her even on the darkest of days. Don’t make her put you in front of herself, if you plan on treating her like she belongs to the bottom of your priority list. Don’t manipulate her into prioritizing you if you plan on treating her like your second choice.   Don’t make her trust you if you plan on playing with that trust. Don’t make her think that she can rely on you if you plan on backing out on her when she starts to need you. Because the last thing she wants is to be hurt once more. The last thing she wants is to get used to having someone around just to be left hanging all over again.

I No Longer Want You Back

Opposite Yet Compatible In 2022 year Based On Your Zodiac Sign

2020 Horoscope December: How Will The Zodiac Signs Do In The Last Month Of The Year?