Jannah Theme License is not validated, Go to the theme options page to validate the license, You need a single license for each domain name.
Facebook Twitter LinkedIn Tumblr Pinterest Reddit VKontakte Odnoklassniki
Capricorn-born are not the easiest people to have a relationship with. Not only are they known for their unbending nature, they also have a tendency to be quite distant and aloof with the people in their life. However, under the right circumstances, Capricorns are more than capable of building a picture-perfect romance destined to last a lifetime. Wondering how to make it work with this sign? Keep scrolling for five things all Capricorns need to have in a successful relationship.Related: GIRL POWER Captions To Rock On Instagram

Capricorn is a sign committed to conventionality and tradition. Where other zodiac signs may be comfortable with a relationship full of ups, downs and undefined moments, Capricorns crave a straightforward, run-of-the-mill romance. They want a few meaningful dates, a kiss when they’re dropped off at home and a respectively normal amount of time before the relationship is officially defined in the boyfriend/girlfriend category. Anything that doesn’t follow a conventional path will have a Capricorn feeling uneasy and out-of-place, causing them to end things before they figure out exactly where the relationship could go.

Capricorn is not a sign that lets people in easily. They have a very independent nature, which means they don’t often feel that they need other people in order to be fulfilled. In addition, with Saturn as their ruling planet, they are often cold and distant to people they meet. It’s not easy to break down a Capricorn’s walls, which means that they need a deep and meaningful emotional connection before they can even consider letting someone in. Once that connection is established, Capricorn-born are committed and loyal partners, but without those emotional bonds there will be no hope of a meaningful or long-lasting romance.

Despite their opinionated and sometimes-harsh nature, Capricorn is an extremely loyal sign. They are stable and reliable in all their relationships, and once they’ve decided to let someone in, they won’t simply walk away on a whim. However, they expect the same loyalty from their partners. Reliability, trustworthiness and dedication are of the utmost importance to Capricorn. Without loyalty, Capricorn will never feel stable or at home in their relationship, creating a romance that’s destined to fail.

Capricorns are not made for whirlwind romances or passionate, short-lived relationships. In fact, Capricorns often struggle to acknowledge their emotions at all, as they’re usually too focused on their personal aspirations to fully note when they’ve developed feelings for someone. Dating a Capricorn requires patience, as they need more time than any other zodiac sign to a build up to a loving and affectionate romance. Many relationships with a Capricorn fail simply because their partner got tired of waiting around for their Cap to get on the same page. If you want a successful relationship with a Capricorn, you have to accept that it’s going to take more time and patience than you’re probably used to, but it will likely be worth it in the end.

5. A Feeling That They’re Valued

In relationships, Capricorn is one of the most low-maintenance partners. They’re independent and decisive on their own, so they won’t expect a lot out of the person they’re dating. However, they’re also rational, logical humans who value action above all else. If you allow them to embrace their low maintenance nature, they’ll eventually realize that you’re not adding much to their life, and they’ll move on quickly. Therefore, it’s important to put a big effort in with your Capricorn partner, doing everything you can to communicate to them that they’re valued and adored. Not only will this create a space where they feel more comfortable opening up, it will also make you an indispensable addition to their life, increasing their overall loyalty and affection towards you and building a much more successful relationship. Capricorns get a bad rep in the world of zodiac signs. If you want to know more about Cap’s positive traits, click HERE for seven common myths about Capricorns, debunked. 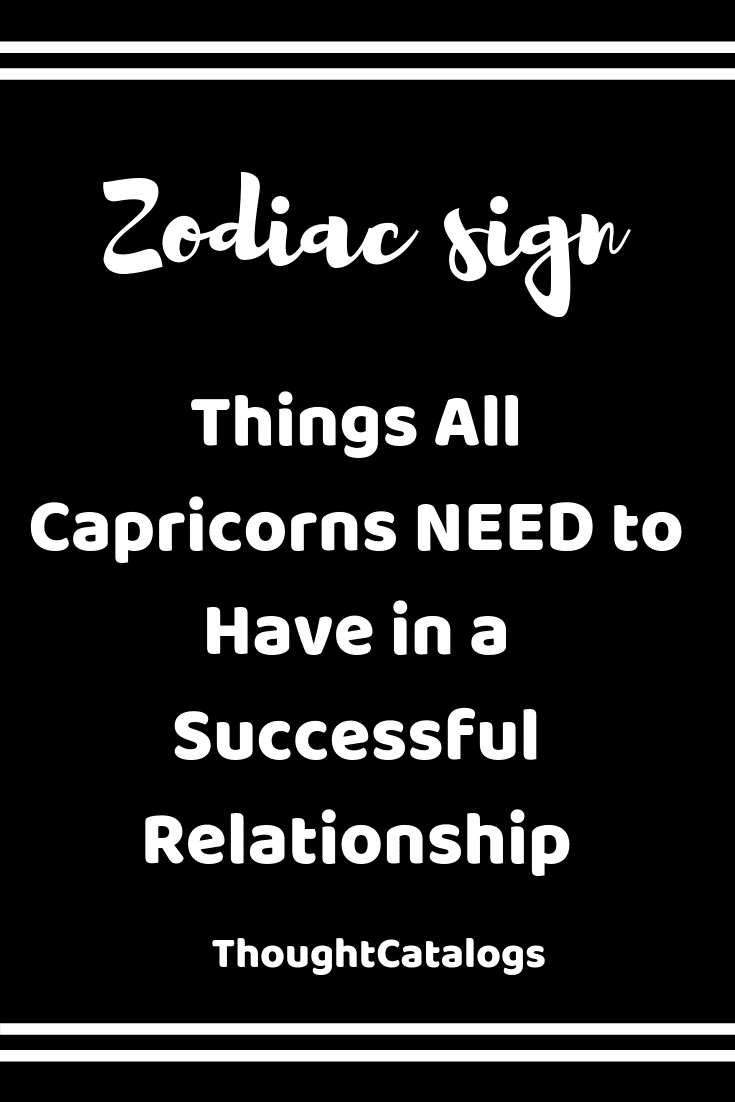 This YA Love Interest Is Your Soulmate, Based on Your Zodiac Sign