I want you to imagine a girl who is sitting all alone in her room, even if it is already late, thinking about the love she craves so much. If you look better, you will see a mix of her tears and mascara on her face. She doesn’t even wipe away her tears anymore. She just lets them run down her face. That’s how much she doesn’t give a damn about herself. Now, imagine her body cramping every time she starts to cry and tries to be quiet because she doesn’t want anyone to hear her.

Can you see how badly she feels? Do you see the pain in her eyes? Or will you continue to pretend that you are blind every time she suffers?

Maybe she looks pretty fine from the outside when she’s out and among people but when she comes into her own 4 walls she starts falling apart. This girl was convinced that she is the unlovable woman and for some reason she believed in that story.

But the truth is that a girl like her is far away from an unlovable one. She is the kind of a girl that can make your worst day a good one. Once she enters the room, the sun shines brighter and she can make people feel better. A girl like this has sympathy for everyone, especially those who need it the most. She is caring, loving and understanding. All in all, she is a good person. But the catch is that she thinks that all the people around her are like that. She doesn’t know that there are people who have a cold heart, people without emotions, those who will convince her that she isn’t worthy, that she isn’t enough. And she had such bad luck to fall in love with a man like that.

She once loved a man who made her feel like an unlovable one. She loved him with all her heart and soul but instead of a great love, she got nothing. She craved so much that kind of love people write books about. But all she got was manipulation, gaslighting and belittling. She was just one more victim of a man who wasn’t capable of loving. A broken man like that broke her heart in small, tiny pieces and left her like that with no remorse. He left her because he couldn’t stand that she was happier than him. He was just a coward who didn’t deserve her. But yet, he meant a lot to her, enough to convince her that she is an unlovable one.

She once loved a man who made her lose herself. In a relationship with this man, she completely lost herself and everything that she was representing. She wanted to please him so much that she forgot her needs and her emotions. She thought that he will leave her if she doesn’t do what he wants and that’s why she cries so much now. She is mad at herself because she put her life on hold for a man who didn’t deserve her. She can’t live with the fact that she put him first while he never truly cared about her feelings.

She once loved a man who made her lose her sanity. With him, every day was a living hell. He would do horrible things to her just to keep her close. He convinced her that she was broken and that nobody will love her like he did. Because of him, she started to believe that she is not a good person and that she doesn’t deserve him anyway. He made her think that she should consider herself lucky for even living with him because he made himself look like the man of every woman’s dreams.

She once loved a man who killed her will to live. With him, she felt that living was in vain in the first place because she didn’t do anything to make her world a better place. He was such a coward to admit to her that she was way stronger than him and that she was the person who would give her life for her loved ones. He was scared of her, so he wanted to manipulate her all the time. That was food for his rotten soul and too bad that she didn’t see that in time.

She once loved a man who beat her to an emotional death. She was head over heels in love with a man who didn’t give a damn about her. His only pros were that he knew how to lie well. That’s the reason she stayed with him all that time. He found a good way to deceive the girl who loved him. He made her believe that she was ugly even if she was the most beautiful woman in the room. He made her cry in front of her friends every time she would feel happy. He transformed the most cheerful woman into a desperate one. That’s how much power she gave him.

He said that she was an unlovable one. But he forgot to say that he was the one who didn’t put a lot of effort into their relationship. He was the one who didn’t give a damn about her and her feelings. He was just a selfish asshole who cared aboutof his needs only. And in the end, he lost the best thing he has ever had in his life.

So, if you see him trying to find her to fall on his knees in front of her and ask her for forgiveness, tell him that is in vain. Tell him that the girl who once was the unlovable one doesn’t exist anymore. She died that night when he made her cry and she swore that was the last time he was making her cry.

That girl is in a better place now. She is with someone who won’t take her for granted just because of her big heart. She is with a man who will never make her an option. She finally realized that in fact, she was never the unlovable one.

She is finally happy.
She is lovable.
She is free. 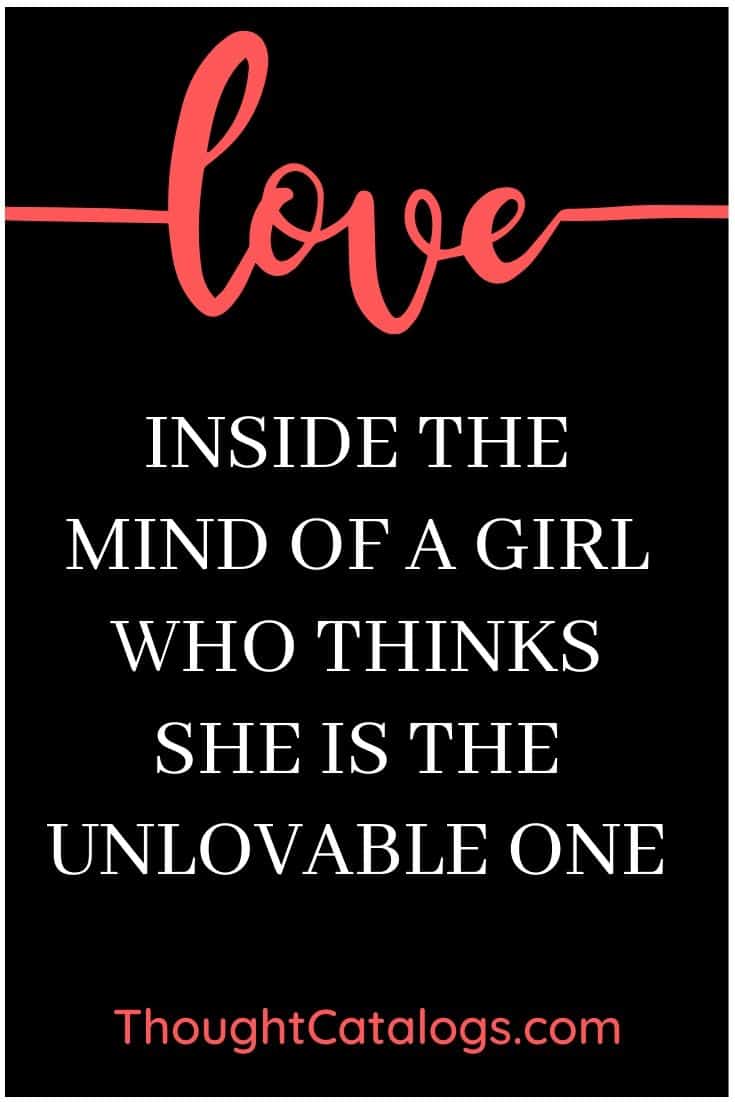 When You Don’t Get The Love You Deserve