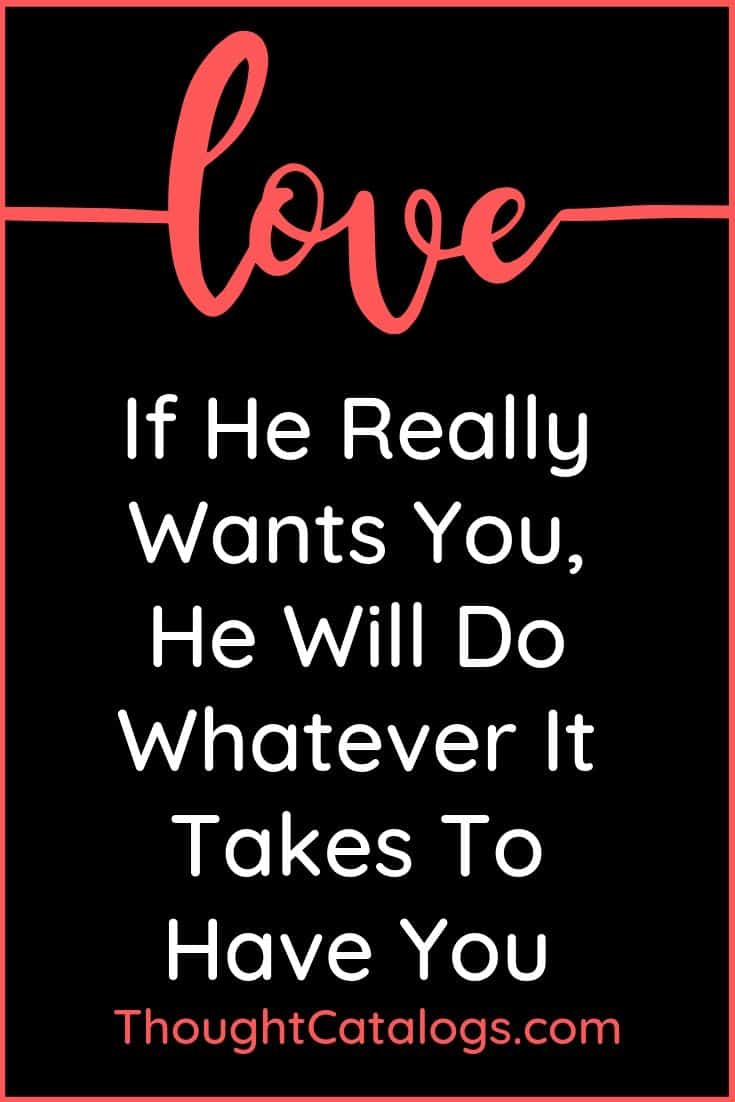 You want him more than anything and you’re ready to do everything to win his heart.

He leaves you waiting for his call and instead of blaming him, you find excuses for his behavior.

He tells you that he needs more time and instead of getting mad at him for playing with you, you show understanding and compassion.

And what does he do for you in return?

Does he go out of his way to surprise you, to make you feel special, to show you how much he wants you, to show you understanding and compassion just like you’re doing for him?

Stop for a moment and open your eyes to the truth! If he really wants you, he will do whatever it takes to have you!

Feel the truth, see the truth, read it again and again until it reaches every pore of your being.

Dear, if he really wants you, he would never make you wait for him to text or call you.

He would walk with his phone stuck to his pants like glue and he would check it every second to see if you’ve replied to him.

He would never make you feel insecure or worried about his next move.

If he really wants you, he will do whatever it takes to have you!

If he really cares about you, he will make sure for you to see it, hear it and believe it!

He will not spend hours searching for the lamest excuses only to keep manipulating you.

If he’s guilty of something, he will admit it to you and he will ask you to understand him and forgive him.

But if you don’t, he will not force you to do so.

Your happiness will be his main priority and he will never make you feel less important by taking you for granted.

If he really wants you, he will surprise you with a bouquet of beautiful flowers to remind you of your true beauty inside out.

If he really wants you, he will camp in front of your door waiting for you to notice him instead of ignoring your every call.

If he really wants you, he will always make sure that you’re feeling comfortable instead of only thinking about himself.

If he really wants you, he will treat you with respect and he will make you feel appreciated instead of neglected.

If he really wants you, he will make sure to treat you like his priority and not an option.

If he really wants you, he will make damn sure to show it with his actions instead of fake words!

That’s the only truth you need to know and anything else is a lie.

So, stop falling for his dirty tricks and stop finding excuses for his shitty behavior!

Understand that if he doesn’t treat you the way he should, it means he’s only playing you and wasting your time.

It means he’s not worthy of you and you shouldn’t waste a second more on him and his shitty behavior.

The math is pretty simple here. If he doesn’t SHOW you that he really wants you, you shouldn’t believe his shitty words.

If he doesn’t make an effort to make you feel special, you should never accept the crumbs he’s giving you.

You deserve to be treated like the lady that you are and you should never go out of your way to please his shitty, manipulative, greedy ego because he doesn’t deserve any of that.

The more you please him, the more he’ll be taking you for granted.

The more you call him, the more he’ll be ignoring your calls. The longer you wait for him, the longer he’ll be taking you for granted!

When a man (read: real man) really wants you, he doesn’t shit his pants and start playing the game of being indecisive, selfish and manipulative.

When a man (read: real man) really wants you, he makes sure to do whatever it takes to have you!

So, if he really wants you, he will go out of his way to prove it to you!

He will not waste his time playing games with you. He will hold your hand when you’re scared.

He will hug you when you’re feeling alone. He will surprise you to make you feel special and loved.

He will not just say those three words and think that his job is done.

He will fight everything and everyone to prove his love for you and you will never have to worry about anything.

When a man really wants you, he makes sure to help you, to support you and to show you how beautiful you are instead of downplaying you and forcing you to overthink his every move.

When a man (read: real man) really wants you, he never makes you wonder about his true intentions.

He proves his words with his actions, he protects you, he holds you in his arms and never lets you go, no matter what!

How To Attract Your Crush, Based On Their Zodiac Sign

This Is Why You Should Love The Broken Ones

10 Signs He Will Not Be Calling You Back

The Astrological Reason Your Life Is Going To Improve In 2021, Based On Your Zodiac Sign

Scorpio Season Begins: Time To Let The Past Die And Go For A Complete Transformation

Not Being Chosen Will Hurt Like Hell, No Matter How Big...