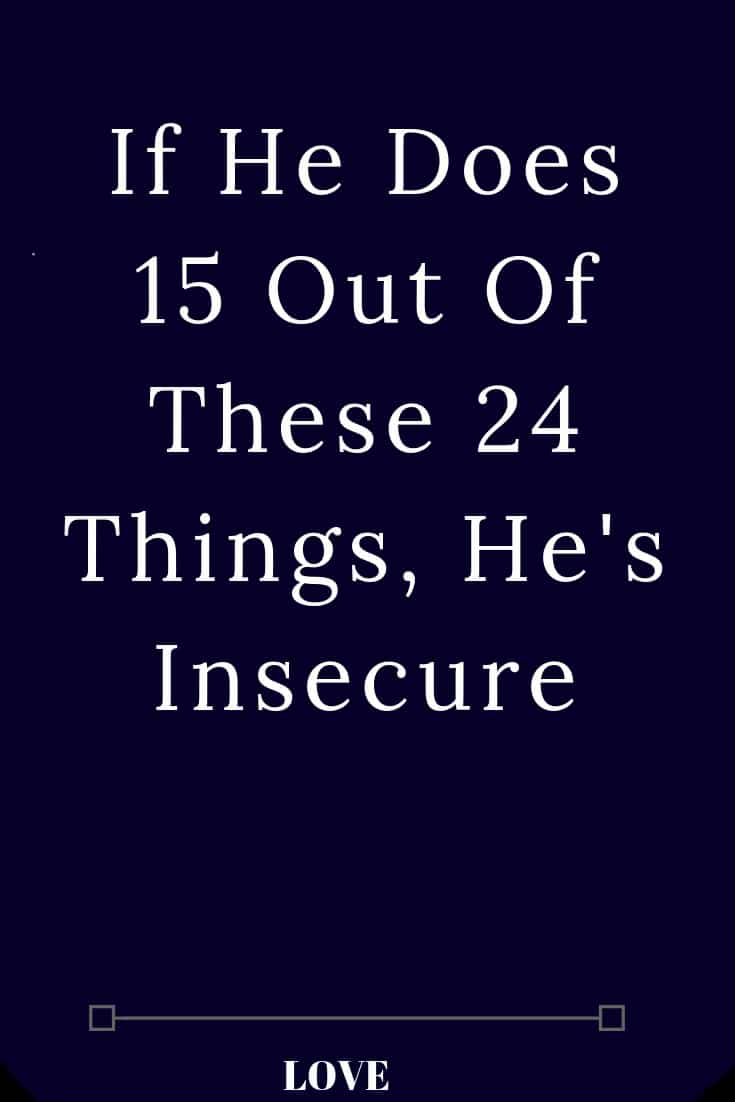 When a man is confident and secure with himself, it can be a real turn on. A fella who feels comfortable in his skin and isn’t shy about being himself without being pretentious or a show-off is a keeper. But like everything else in life, nothing’s (and nobody’s) perfect.

While a guy may be great overall, there has got to be something he is insecure about. And that’s totally fine. We are only human, after all, so if your man isn’t 100% cool with something about himself, cut him some slack. We would only expect and hope for the same treatment from him in return.

On the other hand, watch out for a guy who is super insecure. He may not come right out and reveal his shortcomings, which would be the mature thing to do, but rather act out in ways that prove his insecurities, nonetheless. And these things can be anything from petty to problematic.

Check out these 25 signs your special (or not so special) someone is insecure. If he does a few of these things, perhaps there’s a chance he can change his ways, but if he does 15 or more of these items, it’s a sure bet he’s insecure. Observe his behavior and you make the call.

24He Texts You Constantly

It is always nice to hear from your man when you’re not together. A sweet text every so often shows that he is thinking of you and wants to let you know how much he cares. But caring can turn to scaring you off when he’s constantly texting to the point of becoming obnoxious. And his texts are probably not important or even interesting. If your guy texts you non-stop, it could mean that he’s insecure.

Out of sight, out of mind may make him think that you don’t really need him.

If he had more self-assurance, he could get through the day with just a smattering of texts when necessary or appropriate. Too much texting calls for a sad face emoji.

Breakthrough new video reveals the surprising reason men aren’t committing to you, and EXACTLY how to get them to commit and say “YES” now! Discover the simple shift you can make to see the world through a different lens; a lens that will reveal exactly what men are thinking and what they really want in a woman. If you’ve ever wanted to know how to truly understand any man, then this is the most important video you’ll ever watch.

Does your guy have a constant case of “FOMO,” a.k.a. fear of missing out? If so, he’s likely glued to his phone, checking his Facebook, Instagram, Twitter, etc. He may also be comparing his life to what he sees others posting on these social media sites. It’s fine to check in every so often just to keep up with things or to post something to share with followers and friends.

But if your man spends more time on social media than he does doing other activities, it’s time for him to consider deactivating his account pronto.

His insecurities are eating away at him the more he thinks other people are living better lives. Social media isn’t a true portrayal of what’s what. If he doesn’t get that, he’ll never get the thumbs up.

22He Spends Loads Of Time Getting Ready

Does your man spend hours getting himself ready for work, date night, or even just to hang with the guys? When your dude is in the bathroom for so long that you think you need to call the fire department for assistance, he’s got a case of serious insecurity. It’s good that he wants to look well-put together, even dapper, but there comes a point when looking posh becomes a problem. Your man is surely insecure and feels the need to primp and pamper himself to the extreme.

If he had more confidence, he’d realize that he doesn’t need to tweeze every wayward unibrow hair or spritz on yet another layer of cologne.

He should be able to get ready in a reasonable amount of time so everyone can get where they’re going without being “fashionably late.”

21He Compares Himself To Others

A secure man knows that he is worthy. Even if he’s not the best athlete, the smartest in the room, the most handsome guy at the party, or the funniest of his friends, he still realizes he’s special, just because he’s unique. But the insecure guy always compares himself to others, and he may even drag you into the painful process. He may ask you if you find other guys more attractive or if he’s in better shape than the “muscle heads” you see at the gym. Maybe he knows your ex-boyfriend was studying to become a chemist, and now believes he’s not intelligent enough for you. If your man constantly compares, he’s sure to be insecure.

20He Exaggerates His Achievements

There’s nothing worse than a guy who can’t be honest about his accomplishments. Perhaps your man just got a raise, but rather than telling you it was only a slight increase in salary, he boasts that he’s on his way to becoming a billionaire.

Maybe his team won the office softball game that weekend, but your man pretends that his shortstop skills are what led the team to victory.

He may go back in time and revisit his high school days when he swears he was the most popular kid in class and also got the best grades. All this boasting BS is a sign that your guy is insecure and kind of a jerk.

19He Puts Others Down

When a man is insecure, he may try to make himself feel more important by belittling others for no reason other than a stroke to his ego. Not only is this behavior childish, but it’s cruel. Surely you will think your man is behaving like a jerk if he puts down others, but realize it could be his insecurity leading him to act out. That said, your man is no longer a toddler. He needs to man up and act accordingly. Putting down others only makes him mean and does little to build his confidence in the long term. The next time you see him put someone down, put him out.

Unless your man is Daddy Warbucks, there’s no reason for him to spend like the world’s going to end tomorrow. Okay, if your man is well-to-do, the scale of overspending shifts, but the point is the same. Some guys will spend beyond their means or go overboard with their credit cards and cash to show off. They think they’re impressing their gals by gifting them with the finer things in life.

On a special occasion, this is acceptable, even generous. But if your man thinks he’s a millionaire when he’s making minimum wage, it’s likely that his insecure nature is the cause. If he really wants to impress you, he can show you that he’s smart with his money.

If Zodiac Signs Were What Will Be Your Downfall In 2019, Based On Your Zodiac Sign

How To Stop Obsessing Over Someone: 10 Bulletproof Ways To Get Him Out Of Your System

Five Reasons to Date Each Zodiac Sign In September 2021

He Is Nothing More Than A Bad Habit You Need To...

ThoughtCatalogs - August 19, 2019 0
Your phone lights up and your heart is racing because you see his name. After so much time, after so many “goodbyes forever” and...