Facebook Twitter LinkedIn Tumblr Pinterest Reddit VKontakte Odnoklassniki
Everyone gets angry in their own unique way—but your zodiac sign reveals a lot about what angers you and how you react to it. Whether you’re feeling mad or you’re dealing with someone else’s rage, scroll below to find out what sets off each sign.Related: These MEAN GIRLS Quotes Make Fetch Captions

When Aries is angry, they let it all out. They have fiery personalities, don’t mind heading into conflict and tend to not keep their strong emotions to themselves. Their outbursts may appear like tantrums to outsiders, but this is just how Aries processes their emotions. Once they’ve shared their fury, the excitement typically doesn’t linger for too long. They express themselves in short bursts and tend to forgive quickly and eagerly.

It takes a lot to get a patient, grounded Taurus angry. They’re typically dependable and aren’t easily swayed, but if you push a Taurus too hard, it’s possible to bring out their fierce side. If you want to anger a Taurus, mess with the prized positions they’ve worked hard to secure. Once you’ve got them started, getting stubborn Taurus to back down is no small feat.

Sociable Geminis love a good argument, but that love can turn to rage when their expertise is called into question. When they’re angry, Geminis will shout a lot and keep the argument going until they believe they’ve won. They also have dual natures, so the aftermath can go one of two ways. They can either spend their time obsessing over the conflict and drawing it out, or they forgive almost immediately, forgetting about the dispute entirely. If they’re still mad, a simple apology usually sets things right.

Cancers feel all of their emotions intensely, whether it’s sadness, happiness or anger. They can be prone to occasional outbursts and tantrums when they’re upset, and this anger tends to affect all of the aspects of their life until they can regain balance. Offenses tend to stick with them for a long time because they have excellent memories, but if an emotional appeal is made, Cancer is likely to find forgiveness in their heart.

Leos care a lot about how they come off, so they will usually stay calm and collected even when they’re at their angriest, for appearance’s sake. They’re most likely to get upset when they don’t feel they’re receiving the attention and admiration they deserve. However, their anger is downplayed, and Leo becomes distant rather than visibly mad. In extreme cases, they may even try to subtly undermine the person who angered them—but you’d never know it from the outside.

Virgos are typically calm and even-tempered, and not any old thing can make them upset. However, they do get irritated when people mess with their routines and gum up their perfect plans. Their anger stems from their need to keep everything under control. When they do get mad, they simply act indifferently to the person they’re upset with. Outwardly, they’ll remain cool as a cucumber, even if they’re burning up inside.

Peace-keeping Libras will almost always work their hardest to keep their anger to themselves. They prefer to be the neutral party in any argument, but forcing them to pick sides will deeply upset them. Libra can’t stand conflict, so they’ll avoid an argument at all costs. If push comes to shove, they’ll find a way to shoulder the aggressor out of their life so they don’t have to deal with them any longer, without ever engaging them.

Intense Scorpios are another sign that’s quick to anger. They tend to think highly of themselves and keep only a few close friends, so others can often rub them the wrong way. They also have a good intuition for knowing the truth when they hear it, and they can’t stand lies. They don’t take aggression lightly, and their anger can last a while.

Sagittarius is more likely to forgive than any other zodiac sign. They rarely get angry, since they don’t dwell on the negative for too long and are constantly trying to move forward. If they don’t believe in a criticism, they let it bounce right off them. However, they do dislike being boxed in or given restrictions, and they can’t stand boring people. Still, when they are legitimately angry, they mask it under their positivity. But if it gets really bad, watch out because Sagittarius will be brutally straightforward.

Capricorns always strive to do things correctly, and they can become easily angered when someone gets in the way. They care deeply about the quality of their work and their strong judgment, and don’t like either being called into question. When they’re angry, they feel it deeply, but it doesn’t always show because they funnel those emotions into something productive. Typically, their clear, even heads will prevail. But when Capricorn is pushed too far, get ready for a shouting match.

Aquarius is known for its free spirit and ability to go with the flow, and the things that tend to make others angry just don’t bother this sign that much. However, they strongly dislike being forced to follow along and conform. When truly angered, Aquarius won’t do much to make it known—though they’re witty and can use their sharp tongues to put someone in their place. Still, they may carry a grudge with them for a long time.

Sensitive Pisces can be angered pretty easily. Instead of lashing out, however, they tend to internalize their anger. Even if it’s entirely someone else’s fault, they’ll make it all about themselves and what they did wrong. If they ever do manage to see that someone else is to blame for their anger, they will creatively plot revenge, but in actuality, they’re kind souls who would never act on those impulses. 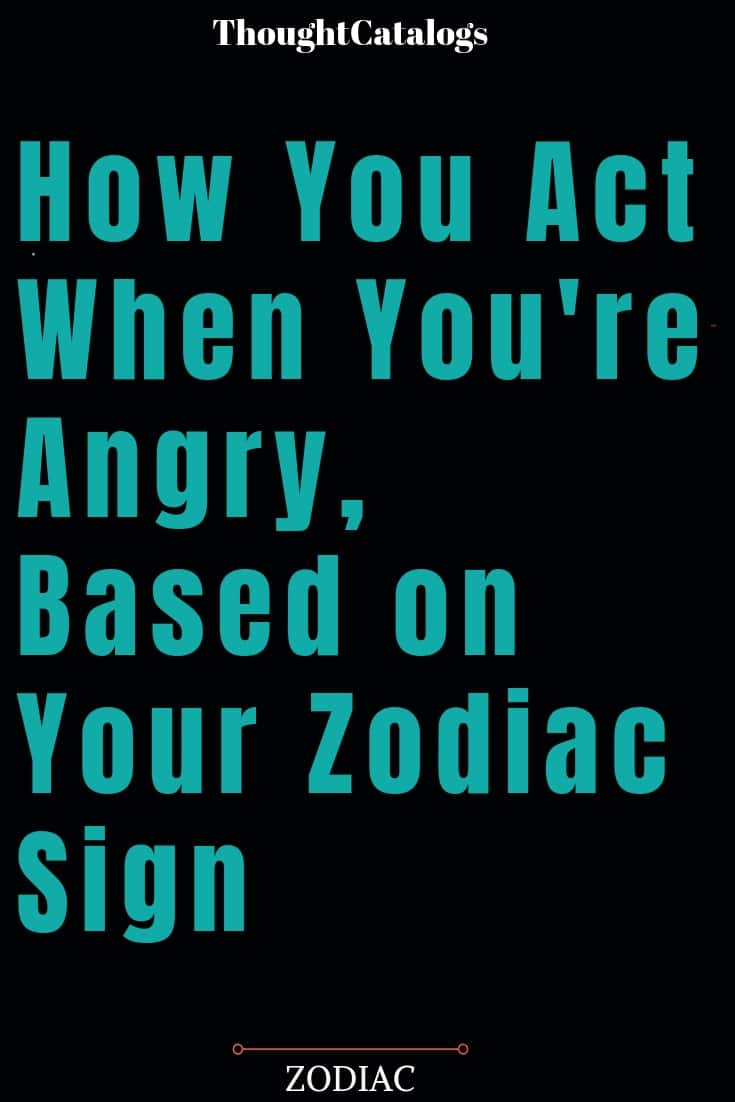 Here's the Type of Art You Should Pursue, Based on Your Zodiac Sign