How do the star signs ruin their relationships? What personality traits can make an otherwise perfectly healthy and happy relationship fall apart? Here’s what astrology has to say on how each zodiac sign tends to mess up when it comes to their relationship.

Struggling to form a healthy, long-lasting bond? Where are you going wrong? Astrology is here to shed some light on how each zodiac sign sabotages their chances for happiness in love. Read on for the star signs and how they mess up, relationship-wise.

Aries never fails to find a way to disrupt the harmony of their relationship. If, by some miracle, everything’s going well, they are sure to create a problem out of thin air by starting an unwarranted argument about that time their partner didn’t do them a favour they asked.

And, of course, compromises are out of the question. Don’t try to change them – you’ll be wasting your time. Their ego is legendary.

Taurus has the bad habit of constantly interrogating their significant other about their whereabouts. There’s no denying everyone likes it when their other half expresses their love and affection in an intense manner, but Taurus overdoes it – like, really overdoes it.

They are capable of interrupting an important work meeting to call their partner to ask them where they are! (“No, you don’t get to break up with me without having told me where you’ve been!”)

It’s never Gemini’s fault when their relationships go awry; they will swear by the old gods and the new that they did everything in their power to make things work.

They may have stood you up more times than you could count or never have gotten around to paying the electricity bill despite having promised you time and again that they would, but what did you expect? Can you really blame them, considering how busy they are and how many things they have on their mind? (Yes, you can.)

CANCER – “HAVE I… HAVE I DONE SOMETHING WRONG?”

You’d better make sure you have access to infinite amounts of Prozac before getting into a relationship with a Cancer. You won’t be allowed to ever get the blues, have a bad day or be in a bad mood – not because they’ll get mad at you or anything, but because they’ll think it’s their fault.

And when their insecurities get the better of them (which happens as often as 16 times a day), they are, simply put, insufferable. Which is why you will also have to constantly reassure them that you love them – unless you like falling asleep to the sound of whining.

LEO – “WAIT TILL YOU HEAR WHAT HAPPENED TO ME!”

Are you involved with a Leo? If yes, could you please count the number of times you’ve been allowed to express how you feel? It should be easy; chances are it’s been no more than a couple.

Every time you so much as attempt to talk to them about a problem you have, they interrupt you before you’ve even finished your first sentence to talk about how they’ve been through something similar, and before you know it, you find yourself sitting there listening to their story. It’s always about them, them, them, THEM!

VIRGO – “WOULD YOU RATHER I LIE TO YOU?”

Virgo tells it like it is, and to hell with the consequences or how that makes you feel! It doesn’t cross their mind that maybe they should try keeping their mouth sh… their thoughts to themselves every once in a while!

Their penchant for criticism borders on the obsessive compulsive – just like the rest of their personality traits, if we are to be, well… honest. And when they hurt their partner’s feelings, they invariably fall back on the excuse that they’re being honest “for your own good”. (“No, I’d rather you not speak, like, at all.”)

LIBRA – ONE GETS AS MUCH AS ONE GIVES.

Thinking about getting involved with a Libra? Then you probably enjoy the idea of being in a relationship that feels like a constant negotiation process aimed at achieving a perfectly balanced give-and-take. You can choose where you two are going tonight as long as they get to pick the place you’re going to tomorrow.

SCORPIO – “YOU THINK I’M GONNA LET YOU GET AWAY WITH THIS?”

Scorpio is somewhat unpredictable in their relationships – to put it mildly. They give themselves to their significant other body and soul, but one tiny misstep on the latter’s part, and all hell breaks loose.

If you make the mistake of doing something they find even slightly hurtful or suspicious, they’ll lash out with words of poison, aiming straight for the heart. Eventually, they will regret it and come asking for forgiveness, assuring you that they love you – but not before they’ve made you regret whatever it is you have (not) done first.

Have you ever been to a place, heard a song, or been hit by a scent that reminded you of an ex while your partner was right there, beside you? Multiply the number of times one of these things, or something similar, has happened to you by 10 (or 90), and you get an idea of what it is like to be a Sagittarius.

Sagittarius avoids commitment like the plague; as soon as they start feeling tied down, they locate the nearest exit and off they go, looking for their next romantic adventure. Which means that even the slightest gesture on your part can remind them of a past love. You probably won’t mind it too much – at least not until they accidentally call you by an ex’s name.

CAPRICORN – “GIVE ME ONE GOOD REASON TO DO THIS.”

Capricorn is too busy to waste their time on relationships that hinder their progress. They can’t afford to spend time doing all those pointless things that would please you – they have work to do. And in the rare occasion that they don’t, they still have to keep the upper hand.

So if you make the mistake of suggesting that you two take a walk in the park or go see that movie you’ve been dying to watch, don’t expect them to say “yes”; the minute they start indulging your crazy demands, they lose control of the relationship. Soon enough, you’ll find yourself suggesting that they continue to call all the shots, but count you out – permanently.

AQUARIUS – “I BELIEVE IN YOU!”

Aquarius are natural-born encouragers. They encourage everyone to be themselves, to constantly test their limits and to explore their full potential – and their romantic partners are no exception. Aquarius themselves, though, are an exception; they make the best spectators in the world!

They will suggest that you two go bungee-jumping together, only to stay in the sidelines, reassuring you that they believe in you, while you’re getting ready to look Death in the eye. And if, by some miracle, you make it back up to the bridge in one piece, you’d better have prepared yourself for an evaluation of your performance (yes, pushing people off a bridge is illegal).

Pisces believes everything happens for a reason, and the reason is that the Universe is out to get them personally. They experience – and present – even the most minor of setbacks as a catastrophe that could rival the Apocalypse. If you don’t enjoy listening to sob story after sob story on a daily basis, there must be something wrong with you.

Try developing some empathy, or at least showing some appreciation for the fact that you no longer need to pay to watch a Greek tragedy; alternatively, you can break up with them and find out what it feels like to star in one yourself. 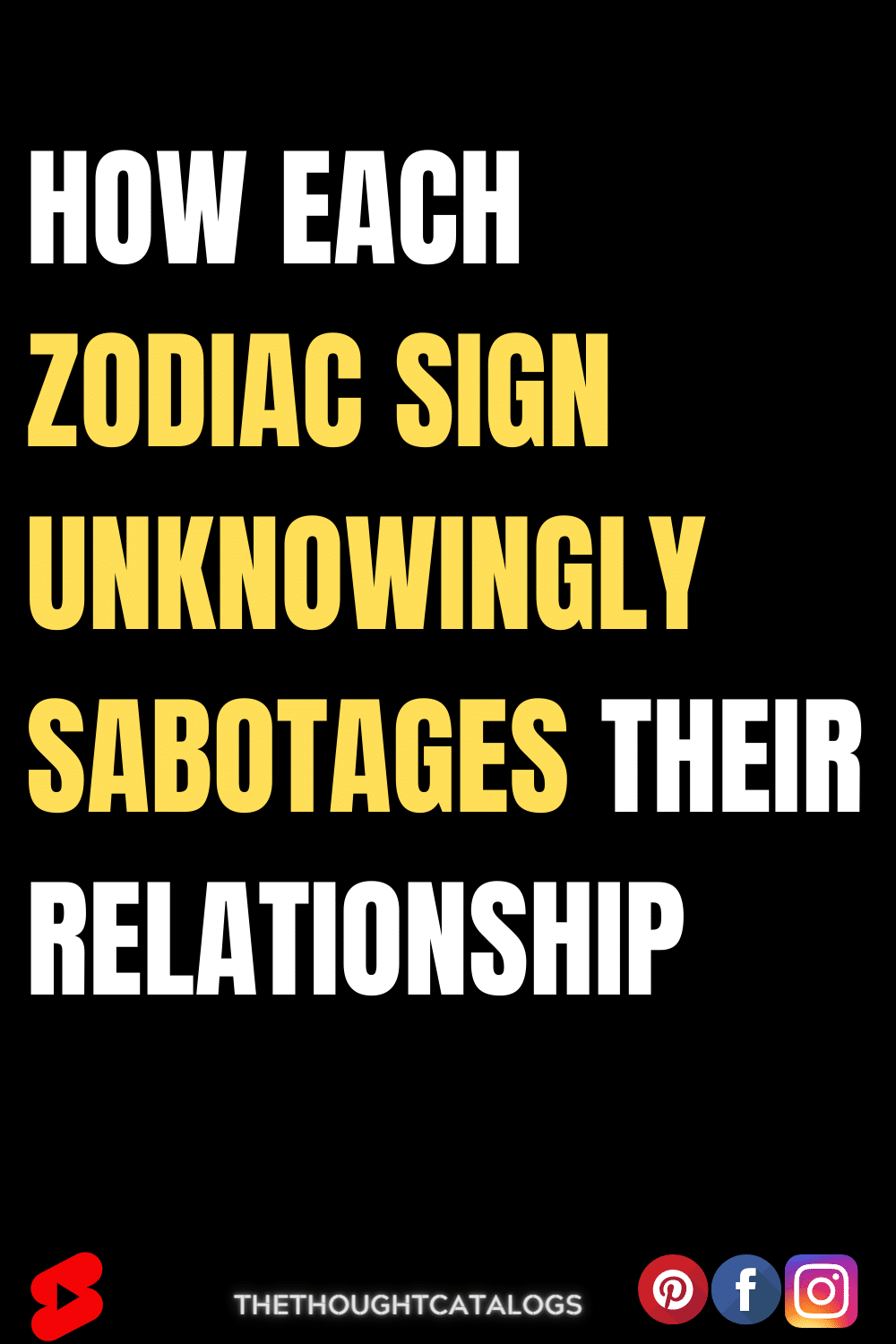 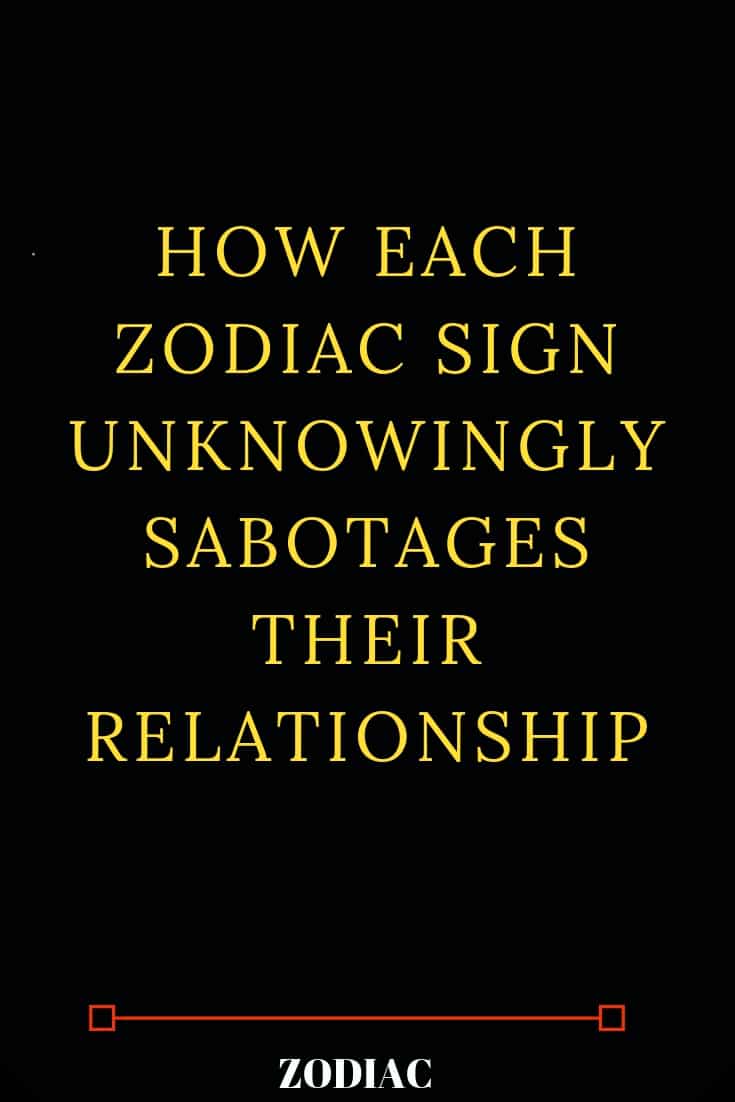