There are several different types of psychopaths and 20+ different psychopathic traits. Which traits you are predisposed to can be easily identified based on your zodiac sign.

Most people find that their zodiac sign can be a flashlight in the dark of their own personality, illuminating strengths that they did not know they had. Zodiac-led information is often eerily accurate, causing people to trust it more and more.

Aries psychopaths are driven by a need for adventure or excitement as their stimulation. Their true negativity lies in their unreliability and irresponsibility. For an introverted Aries, they are more prone to substance abuse.

Aries will draw you into their excitement world, but others will do best to stay engaged with the real world when being swept up.

Driven by envy and self-indulgence, the psychopathic tendencies Taurus holds are a need to compensate for an engulfing emptiness.

They choose to fill that emptiness with the destruction of someone else’s life, as they take whatever they feel entitled to. The real downfall of a Taurus psychopath is that they will never be able to fill the void that plagues them.

Their greedy behavior is exacerbated by the fact that they know this, but a Taurus is known for being stubborn, and they press on anyway.

Lying and seduction are the traits of the Gemini psychopath. Their psychopathic tendencies are those people are easily able to identify from afar.

They are excellent at deducing the wants and needs of other people through interaction and observation. They know how to compliment and flatter someone into giving them exactly what they want.

In many cases, the Gemini psychopath will eventually trip themselves up in the incredible number of lies they tell to get what they want.

The Cancer psychopath is known to be the soulmate type. They seem to be perfect for their target, fitting in with perfect compatibility and creating a vision of a perfect future.

Cancer psychopaths really seal the deal in relationships, working to fully snare their mate, then becoming the self-centered and possessive psychopath that a Cancer truly is.

The soulmate perfect conversations will cease to be fulfilling and only occur often enough to keep the embers alive and the Cancer in possession of the person they want.

Leos are social climbing psychopaths who turn on the sparkle in public while terrorizing family and family friends in private. They exhibit the psychopathic traits of being brilliant while simultaneously, and in equal measure, being paranoid and suspicious.

They are vindictive and impulsive, willing to grasp and pull to climb higher, reaching for power methodically, but quickly. They always manage to have a scapegoat at hand, so people should be wary of Leos especially in a work environment.

Psychopathic traits key to Virgos can be found in career fields full of academics like law, medicine, education and the scientific community.

They are the academic psychopaths who are willing to put in the time to get where they want to be, but others can and will wrap themselves in the vernacular of the profession they want and fake their credentials to get what they want.

They do not get mired down by getting caught, they just adjust and move onto the next job in the profession they want using a resume that is 50% lies. They have no regard for any destruction they cause.

Libra’s are the would be Saint psychopaths with traits that include a sadistic, scheming brutality and an abusive and manipulative personality. Though they appear to have pristine morals, they simultaneously condemn everyone else as being immoral.

The rigidity of their belief that they have the moral high ground leads them to be controlling and corrupt without guilt.

Many Libra psychopaths end up working as police officers, religious leaders and even those knuckle-rapping nuns and corporal punishment using teachers.

Scorpios are the kind of psychopath that is sexually driven. They target whomever they want whenever they want without a need or concern for consent.

Scorpio psychopaths have been known to enjoy a wide-ranging enjoyment of nearly everything sexual. They are nearly impossible to interact with without being consumed as they are a dominating force that also derives pleasure from subjugation and power plays.

A Sagittarius psychopath is also known as the used car salesman type of psychopath. They can draw anyone in with their sales pitch and carefully identify and work on their marks to make the sale.

They never do a quick “one and done” pitch either, they build a rapport with the person, convincing them they are trustworthy so they can expertly manipulate them into doing what they want. They do not feel remorse for their actions or the fallout they leave their victims with.

Psychopathic traits exhibited by Capricorns are suspicious and guided by terror and vindictiveness. Capricorn psychopaths are terrified of being exposed and dangerous because they fear being caught and exposed for who they are.

They are masters of creating an optimal projection but fear being forced to have responsibility for anything they do a pin to them.

This fear applies to being found out for good or bad actions, they do not like being exposed. They are dangerous when vindicating themselves with extensive revenge plots full of cruelty when they are wronged.

Antisocial psychopathic traits are held by the Aquarius. They refuse to obey the law or conform to social norms though they are happy to seek their own gains through conning and cheating others.

They are the masters of aliases, but incapable of planning for the future. They are terrifying as they can rationalize the hurt they cause other people and what they have done, but they continue to do so anyway.

Pisces is the artistic type of psychopath with traits that include amazing verbal skills while displaying an impressive knowledge of either history, art, culture or in many cases all three.

They appear to be charismatic, artistic, gifted and charming and stick to packs of creative type crowds to allow them to blend in.

This type of psychopath uses their artistic flair to get others to cater to them relentlessly while appearing to focus on a grand creation, making others happy to work for them. 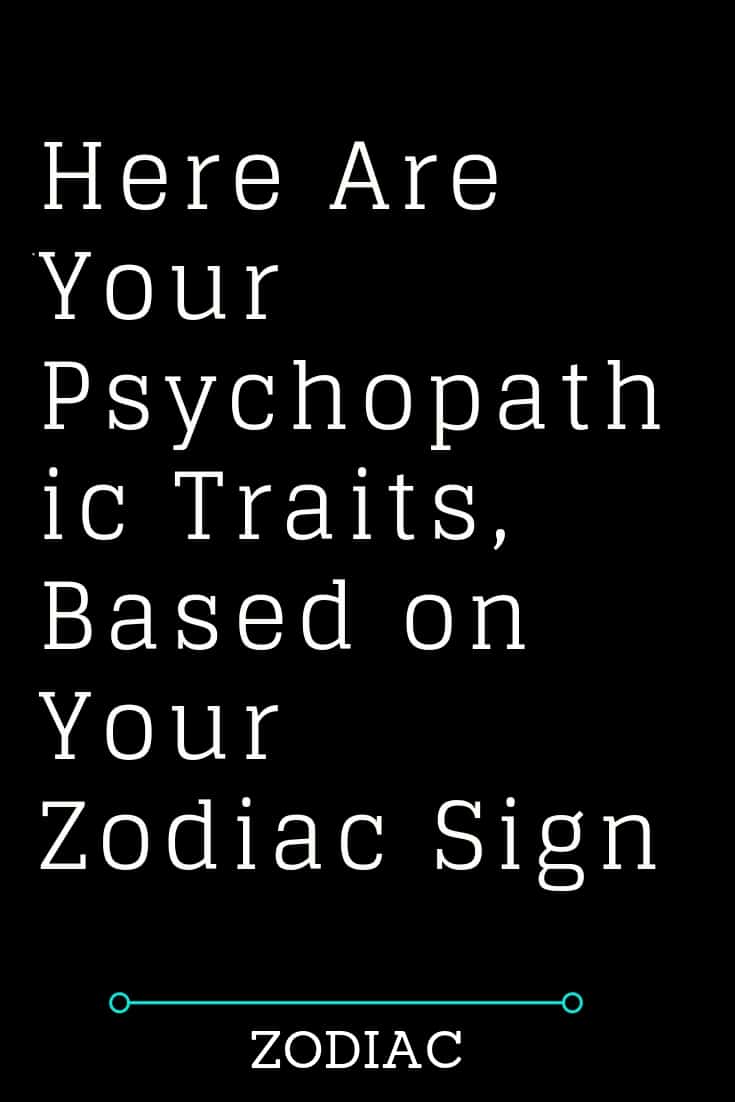 TO THE GUY WHO FIGURED IT OUT TOO LATE