I remember the girl I was before I had my heart broken, and each time after when it got broken as well.”

I remember the girl I was before boys started breaking my heart at a constant rate; my question is, do you? Before boys started taking advantage of me, and started using my heart, that I wore on my sleeve, for granted. I can picture her in my mind, how she acted, how she dreamed, how she slept and went about her day. I remember her oh so well, and sometimes I wish more than ever I could be her again-that young and free girl who had the universe at her feet. Although I can talk about her as if I know her and still am her in a way, I don’t think I’ll ever get the feeling of her back, no matter how hard I try. Too much has happened, too much hurt has consumed me, and although I wish for her to appear again, I don’t think she will and that’s okay. Each heartbreak took something from me and maybe this happened to you as well, in a different way.

At 16 years old, I was the kind of girl who skipped everywhere I went, without a care in the world. My energy was everlasting and I always had a twinkle in my eye that made people smile. I sang Taylor Swift songs, like Love Story, Mine, and Enchanted, and would fight anyone who said fairy tales didn’t exist. I was a daydreamer, someone who spent all of her time with her head up in the clouds; dreaming about castles, big dresses, princes, and riding away into the sunset was a typical scene in my head. I spent most of my time reading romantic novels while my teachers stood talking in front of the class, which ended up getting me into trouble, but I didn’t care. I was a believer, a dreamer, and I couldn’t wait for the day my happily ever after came.

At 17, I thought it was finally going to come true, my dream for a boy to finally like me, my fairy tale moment. I was finally going to get that high school experience that Hollywood so thoughtfully portrayed in the movies. I remember it feeling better than what I had dreamed of, when the boy who I had ‘supposedly’ been in love with for what seemed like forever took interest in me. Although it was mostly only through text that we talked, never in person, I thought the world of him and clung to every word, every promise he made. Until he broke a promise, a promise that included a prom dress and a dance. He acted as if he had never said a word about it to me, and cut off all ties with me abruptly and completely. My heart broke into a million pieces. The girl who once skipped down the hallways now walked to class with earbuds in her ears, drowning out the world around her. My whole senior year was spent with sadness and in silence, not wanting to ever feel that again. Although I still believed in fairy tales, at that moment I stopped believing a little less.

Flashforward and I’m 20 years old and in college. I’d met a few boys since then but nothing that went anywhere and no one who asked me out on a date. Believing in love, believing in fairytales was something I still did and I was hoping to God it would be my turn soon. Then out of nowhere appeared this new co-worker, who shone like the sun and the stars in my eyes. Every time he walked in the room, I got butterflies. Now, this was something new for me, I had never felt this way before, not even with the guy in high school. This guy was different but in a good way. He had curly hair and a cocky smile. He sang country songs and talked about being outside in the snow in the mountains. No doubt about it, I was a smitten kitten. We flirted, we Snapchatted (because that’s the form of flirting these days…) But nothing happened. Before I knew it, he was quitting where we worked and moving on to go to college in Colorado. He knew how I felt about him, but liked the attention, not me, which I realized after. But at that moment I didn’t care; as long as I was talking to him in some way, I was happy. Despite my friends telling me it was a lost cause, I didn’t listen.

That summer on a drunken night, we ran into each other at a concert. Long story short, a hook-up occurred in the back of my car…. (classy I know). I remember perfectly, even though I was drunk, that I kept asking him why he did that to me. I kept telling him I hated him and he kept kissing me, saying he knew. When we were done, he left me alone in the car and the last thing he said to me was to have a good night. Confused, drunk, and alone in a parking lot, I didn’t know what to do. What had just happened? What did this mean? Bawling my eyes out, I called my best friend to pick me up as I stood at the side of the road. Feeling alone and abandoned, I saw him with his friends, and he actually waved. As soon as I saw my best friend pull up, I jumped in her car and that was the last I saw of him for almost two years. I didn’t hear from him at all after that, no Snapchats, no texts, no Retweets, no Favorites, nothing. It killed me. I kept wondering in my mind, why did he do this to me when he knew how I felt about him? I cried for many, many nights, feeling completely broken. Once again I had my heart taken from me within a second. And although I so desperately thought that he was my prince and I wanted to believe in him, after that I stopped believing a little less.

I’m now 23 and still haven’t had a real boyfriend or been on a date. (Not that I’ve been asked). Since that night I was left alone and abandoned in the parking lot, I haven’t let anyone touch me or trusted any guy completely and that was two years ago. Sure, I’ve had boys who have broken my heart in little ways, but nothing to the extreme that I’ve mentioned before already. Since then, I have confided in my best friend (who just happened to be a boy) more than ever. At that point in my life, I was pretty negative when it came to love and life in general. I’d had a lot of things happen to myself and my family that just weren’t fair. Happiness is something I dreamed of, but I couldn’t seem to achieve it. It was something I didn’t see myself ever having. I clung to my relationship with this guy who I thought of as my best friend. I told him recently that I didn’t want him to ever stop talking to me, that I needed him because he knew me better than anyone. And yes, at that point I realized that I did have feelings for him but I wasn’t going to come out and directly say it. But, his response to what I considered a pretty nice compliment completely and utterly broke me more than ever…

I could go into detail of what he said, but I won’t because it’ll make me even more sad. However, he told me that I couldn’t be negative around him because he had worked very hard to not be in a negative place in his life and wouldn’t let me drag him down with me. He told me that if I pitied myself, I would never find a husband and that he would rather be alone than with someone who was negative. Reading that now, I have tears in my eyes. I had never had someone who had torn me down so fast and so cruelly. Yes, he was blunt and I knew it, but using the fact that I couldn’t be more positive, when it is all I want in life, against me, hurt like hell. It was at that moment that I found myself completely broken. I bawled to my friends, to my parents, and didn’t get out of bed that whole weekend. At that time, I didn’t believe in anything, because how could someone who you think so highly of talk to you with such disrespect? I didn’t understand. Then I realized he was just another boy who broke my heart, and I believed in love a little less.

If you’re like me, you remember each time someone broke your heart, and how each time it seemed as if it hurt harder than the time before. You remember every detail down to the exact moment your heart dropped, when it seemed as if it was the end of the world. But let me tell you something, it’s okay to be broken. It’s okay to feel as if you’ve lost hope, you don’t believe in love anymore, and you don’t know if your heart can take another fall. We as women are remarkable human beings, and can overcome anything. Despite what I’ve been through and how broken I’ve felt in life in the past or recently, I’m glad it happened to me. I’m stronger and wiser and know exactly how I deserve to be treated. Do not let anyone tell you that it’s not alright to feel anything you want to; even if you want to pity yourself at times, it’s okay. I believe everything will be okay in the end, and at times I believe a little less, but then I see a glimmer of hope and it makes me believe again. We all deserve a happy ending and a ride off into the sunset, even if means waiting for the right prince. 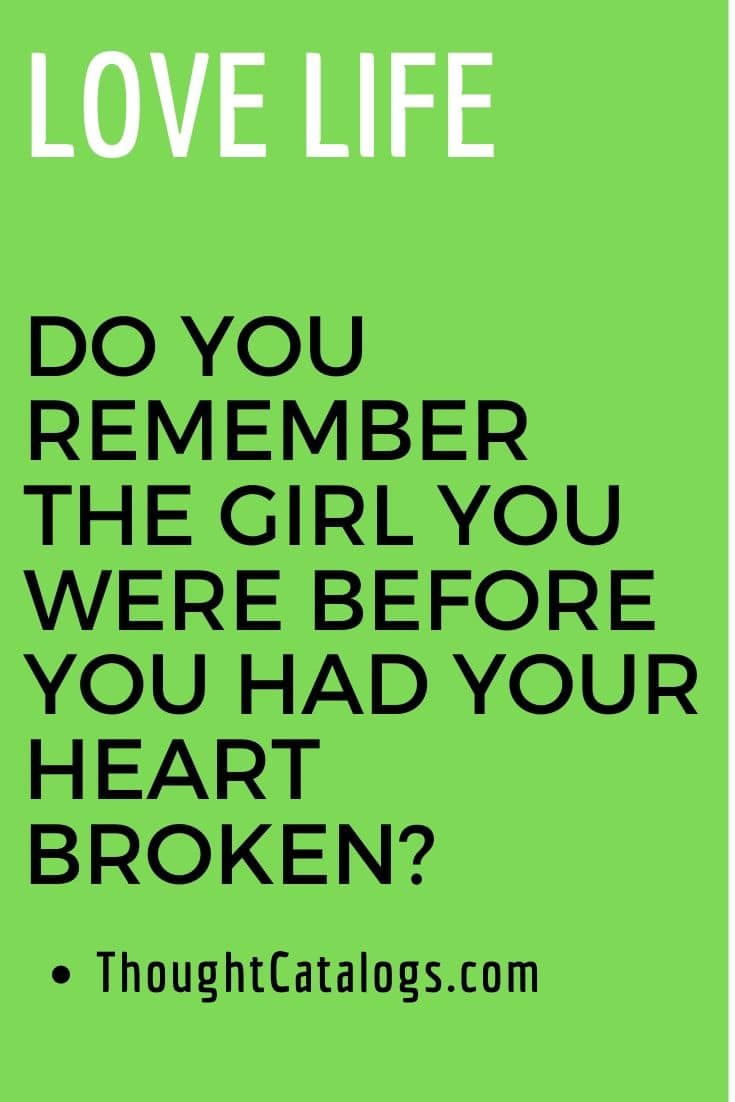