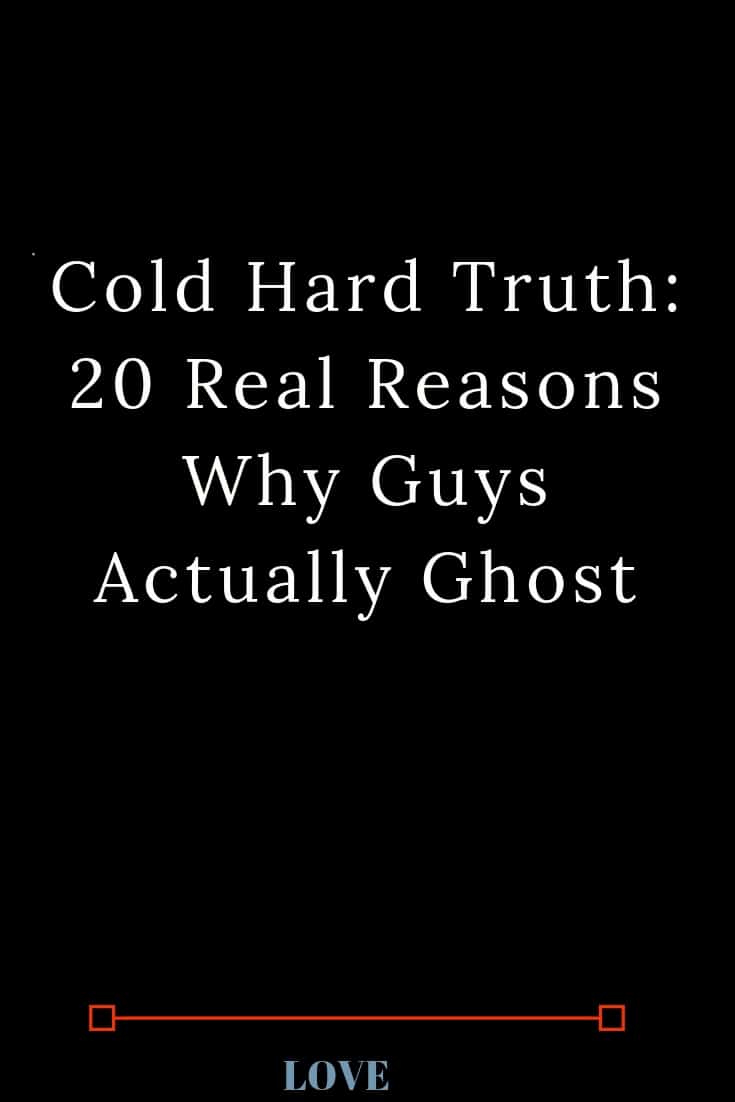 Facebook
Twitter
Pinterest
WhatsApp
Let’s say that we meet someone who is really nice, cute and fits our dream-guy wishlist to a T. Whether we met the old fashioned way at a bar or ran into each other at the market, or met online via Tinder or some other dating site, that’s irrelevant.

The fact of the matter is that he is sweet and we could see something really great blossoming down the road with him. But after a date or two, or after our first sleepover, we never hear from him again. It is almost like he fell off the earth or vanished into thin air. Maybe he never even existed in the first place, and we are just going crazy! Or perhaps he lost cell service while visiting distant relatives. Oh, or he was in a horrible accident and was unable to text us! The possibilities of what happened are endless, thanks to our very active imaginations.   The truth of the matter is that he ghosted us for one reason or another. We need the closure that ghosting denies us, so we talk to people or ask Google why he ghosted us instead of telling ourselves honestly that he doesn’t want to see us again. What put him off? Here’s what 20 guys say made them ghost a woman they were dating.

20She Was A Stage-Five Clinger

For some reason, a lot of guys really don’t like clingy girls. To clear up any confusion, they don’t mind clingy wives or very long-time girlfriends because that is expected and socially acceptable. But a clingy girl on a first or second date is downright scary — especially for a casual dater who isn’t looking for anything serious. My Domaine has this advice for guys, “Guys: Don’t feed the bears. You don’t ever need to make future plans with a woman out of a sense of obligation. Our dance cards are full. We do not need you taking up prime real estate on our overpopulated calendars if it’s not a must.”

19He Doesn’t Get The Dating Rules

Sometimes guys ghost because they don’t understand the ever-changing dating rules or they just don’t want to learn them and run the risk of getting something wrong. They opt out by stringing us along and then ghosting us to avoid playing the game by the rules. According to Business Insider, before apps, “within the confines of a common social group, dating, no matter how casual, always required a certain decorum. If you didn’t want to keep seeing someone, you had to say so, because you were definitely going to see that person again.” Sadly, that’s not the case anymore.

When guys encounter a girl who invades their personal space, they don’t like it and bail on the date as soon as possible. We do feel a bit bad for this one guy, as Cosmopolitan reports. “Recently, I ghosted on a girl because the second date with her was just so awful that I had zero desire to speak with her again. She stuck her fingers in my nostrils in the middle of the bar (as a joke, she claimed), wouldn’t let me get a word in edgewise, and I could just tell we were on two different pages in terms of our interests.”

17He Wants To Avoid Confrontation

Sometimes guys are a lot like us and want to avoid confrontation. They often keep quiet when they should say something, just to keep the peace so everyone stays happy—or at least, not upset with them. Thus, ghosting could be his way of trying to avoid unnecessary drama in his life. As one guy says in a Cosmopolitan article:

Sex? Communication? Romantic Dates? All these things are important, but a breakthrough new video reveals the surprising factor that can make ALL the difference in a relationship and few, if any women (or men) are even aware of it! The key is understanding men on a deep emotional level, and how the subtle things you say to a man affect him much more than you might think. If you’re frustrated with your man going cold, losing interest, or pulling away, then this video is a must watch:

“I know most people would say I should have just told her right then and there that I didn’t see a future, but those people aren’t thinking about how insanely confrontational that could get.” It’s time for him to pull his big-boy pants up.

16She’s Not His Type

Sometimes we meet people then after a couple of dates we realize that we just aren’t suited for each other. This is tricky when the other party doesn’t catch on and realize we aren’t a good match. One girl laments in a Bustle article, saying,   “I really wish people would just be honest and say what’s going on. That includes if they’re not interested, or if they met someone else and want to pursue [them], or they’ve realized they’re not in a good space to date.”

One big reason for guys to ghost us is a lack of chemistry. This lack of chemistry is especially noticeable after several dates, or a sleepover. If he was all for it before the sleepover and then vanishes afterward, he obviously got what he was after. Of course, if asked, he’ll say something like, “It wasn’t good for me.” My Domaine has this to say, “We have to wonder though, if it wasn’t good for you, do you really think she was over the moon?” Apparently, that thought never occurs to guys. Weird, right?

It can be argued that men forget a lot of things but would he really forget to call us back or shoot us a text? We know the date went well. We know he certainly had fun. So why hasn’t he said anything? Should we text him first to remind him or would that just weird him out or make us come across as too clingy? These questions can drive you crazy! According to My Domaine, “Our best guess is this is a Y-chromosome affliction.

Before you roll your eyes, science says men are indeed slower and less organized than women when switching between tasks.”

Never Beg A Man For These 10 Things That You Deserve

40 Emotional Love Letters For Him That Will Melt His Heart

I Never Ever Wished To Need Someone, However I Love Needing You

Horoscopes: Focus On Yourself, It’s Time To Shine In April 2021

What You Have Zero Tolerance For, Based On Your Zodiac