Virgo men really take the lead as they are the worst boyfriends. For starters, they are nitpicky, love to argue and are so strongheaded that they think they are always right.

They are usually emotionally crippled and they lack empathy. Even though they have an ego as huge as their living room, they often use it to cover up the fact that they are insecure.

They are highly intelligent and have a great sense of humor, which are two of their appealing traits. But they easily get overshadowed by their tendency to be jealous and controlling.

Their tongue is usually quicker than their mind and they can get really mean and offensive. They’ll apologize later but by then it’s already too late as the damage has been done.

The only thing that can make the worst boyfriend ever a bit better is their ascendant sign. It can be something that gives them the tenderness and understanding that they lack.

Even though Scorpio is one of the most passionate signs, that alone won’t be enough to categorize him as one of the best boyfriends.

Sure, any girl dating a Scorpio will be swept off her feet by his mysterious flair and mind-blowing performance in bed.

But as soon as the relationship starts getting a bit more serious, Scorpio will pull away. He is a bit of a commitment-phobe.

He will also lack the communication skills that are an essential component of building a solid relationship and suddenly his mysteriousness and guarded ways will become his worst traits.

Scorpio might settle one day and see that the life he had been leading was keeping him lonely. But he will do it on his own terms and in his own time, that’s why there’s no use in sticking around if he hasn’t been self-enlightened yet. If you’re planning on dating a Scorpio then you should know the 15 Brutally Honest things about Scorpios.

The hopeless romantic, a Pisces man will be guilty of sabotaging his own love life. He already created a dream relationship in his mind but the reality is something different. He often becomes a victim of his own unmet expectations.

He has a good nature, too good in fact, that’s why it’s no wonder that he gets played often. If he also had the misfortune of running into a toxic woman, she will just use him so much that he’ll shut himself off emotionally.

After experiencing a bad relationship, a Pisces man will become insecure, maybe even to the point where he becomes jealous.

An Aries man is ultra masculine. While at first glance that might seem appealing and incredibly sexy, it comes with a big glitch. He is dominant, short-tempered and sometimes even aggressive.

He also might come off as presumptuous and bossy, that’s why he needs a strong, independent woman who will make him work to get to her and won’t allow being bossed around.

Once he is head over heels in love, he will shift from bossy to compromising in no time. He has his virtues— he is gutsy, the eternal optimist and very loyal. how to love an Aries and Secrets Things You Need To Know About An Aries

Compromise is not one of their strong suits. They are so stubborn that they would rather bash their head through a brick wall than do anything that is not at their own convenience.

He is really hard to date because he doesn’t meet anybody halfway. It gets really frustrating for the other side to always be the one who has to accommodate him and do all the heavy lifting.

On the upside, Taurus is the most loyal of all the zodiac signs. He always stands behind his words, he is reliable, protective and family-oriented, so there is still hope for a Taurean man yet. Taurus Man Secrets: Put That Hot Taurus Man Under Your Spell

A Capricorn man, aka Mr. Know It All, is well-known for his desire to be the smartest man in the room and his arrogance gets old really fast.

They are a bit bossy and controlling which can be overwhelming for the person dating them. On the other hand, he is extremely hard-working and reliable, which are good traits to have.

They have their own way of being romantic. They won’t light candles all over the apartment or read sweet bedtime stories to their girl.

But he will tell you to drive safe, ask if you are hungry and tuck you in when you are about to sleep. He will do little big things rather than grand gestures and that’s something awe-worthy. If you’re planning on dating a Capricorn then you should know the Brutally Honest Secrets things about Capricorn.

An Aquarian is a man of an acquired taste. He can be an exceptional boyfriend to the girl he is compatible with but to all others, he will be overbearing.

He needs his space and he can seem distant at times; his mood will vary. He doesn’t make romantic connections easily and he takes his time in letting people in.

But once he does find someone who matches his intelligence and challenges him, he will be a great boyfriend. With him, it’s all about finding his missing piece of the puzzle. How to get a Aquarius Man fall for you

Where would a Libran man be if not somewhere in the middle? Depending on the stage of life he is currently at, he can either be the best or one of the worst boyfriends.

A Libran man is charming, flirty and loves the attention he is getting, that’s why he will play the field. He will probably have a fuckboy phase of his life and while he is there, he will be far from a good boyfriend.

But for someone who is dating a Libran man in the mature phase of his life, he will be the perfect boyfriend. He already lived his crazy life and now he is ready to settle.

At this phase, he will have no problem committing and being devoted to just one woman. He will do his best to make her happy and he will want harmony and at some point, he will start a family. How to get a Libra Man fall for you

A Sag hates the idea of being tied down. He craves freedom, that’s why he’ll remain single or in short-term relationships until he finds someone who actually gets him and loves in a way that doesn’t make him feel caged. Jealous and clingy girlfriends won’t last long with a Sag.

Once he meets someone he is compatible with, he will look at it as a whole new adventure. His heart will be in the right place and he will be ready to fully commit; he just can’t and shouldn’t be forced into it.

A relationship with a Sag will be a lot of fun, due to his witty nature and impeccable sense of humor; a day without a laugh will be a wasted day.

Once he is in love, he becomes the best version of himself. You can also read our another Secrets things that make Sagittarius the most romantic partner ever

The thing that makes a Leo man so amazing is that he strongly believes in giving more than he is getting. He will make an effort and go above and beyond to make his loved one feel loved and protected.

He is a romantic soul and he is big on surprises. A Leo man is the perfect combination of a best friend and a lover, which makes him an amazing boyfriend.

Don’t let a Leo’s desire for attention confuse you, as more often than not he just enjoys the attention and there is nothing more to it, not even when it comes to the opposite sex.

He is loyal to the bone. And he will always respect the woman he is with, regardless of her presence at any given moment. Leo Man easy to get, but easy to Lose. “HOLD TIGHT” Know the SECRETS

A Gemini man is really someone remarkable. He has this innate desire to bring joy and happiness wherever he goes and that desire only gets bigger when it comes to his significant other.

The qualities that led them to near the top of this list are their listening and communication skills. When they listen, they are really interested in what someone has to say. They are in touch with their feelings and they easily communicate with them.

Trust, communication, and respect build a great relationship and to a Gemini, that seems so easy because they are wired to give all of that and more.

Some time might pass before they find their forever person but when they know, they just know, and there is no second-guessing. Gemini Man Flirts. But NOT if You Know The Secrets of HIM

With his romantic touch, warm heart and sense of empathy, it’s no wonder that Cancer takes the lead above everyone else.

Cancer is capable of loving someone more than he loves himself, which is not always a good thing for him. He is selfless and full of understanding.

For the girl dating him, he will always provide a shoulder to cry on, he will do his best to make her laugh and indulge her in every possible way.

He usually has zero fear of commitment. He craves closeness and the warmth of another human being and he dreams of the day when he’ll start a family of his own.

He is the kind of boyfriend who lets you experience a movie kind of romance and it will never make him look cheesy because that’s just the way he is.  Here are some qualities of Cancer men and how you should treat them the right way. 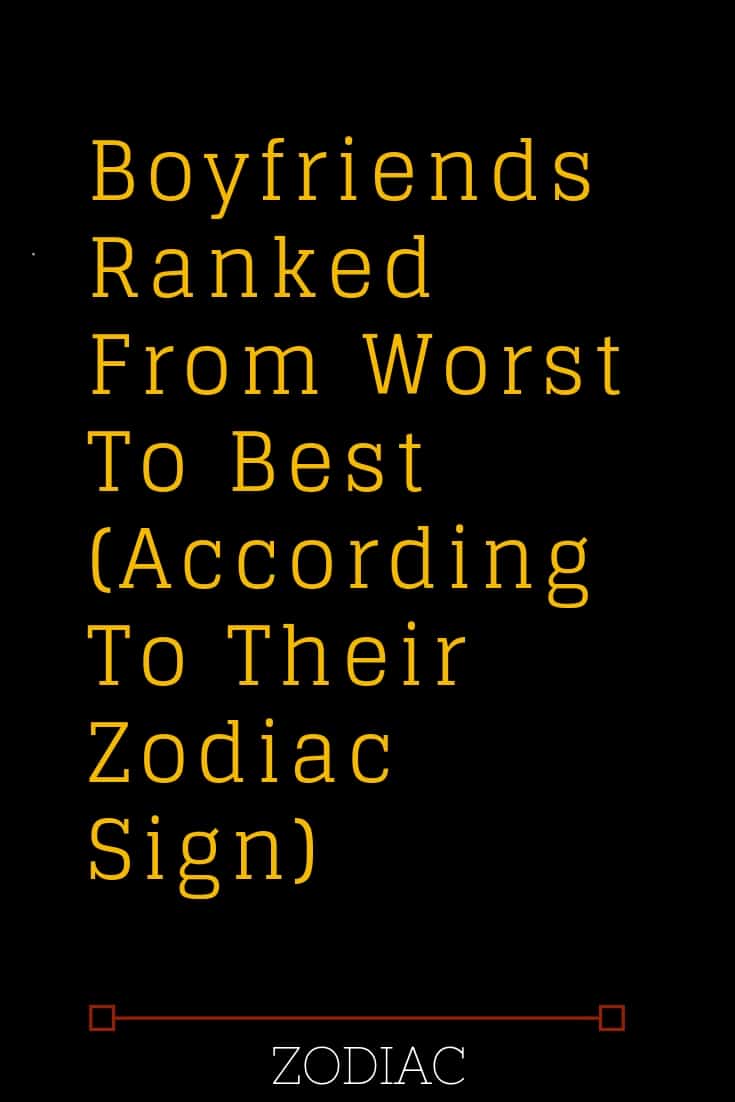 Here Is What Depresses You The Most, According To Your Zodiac