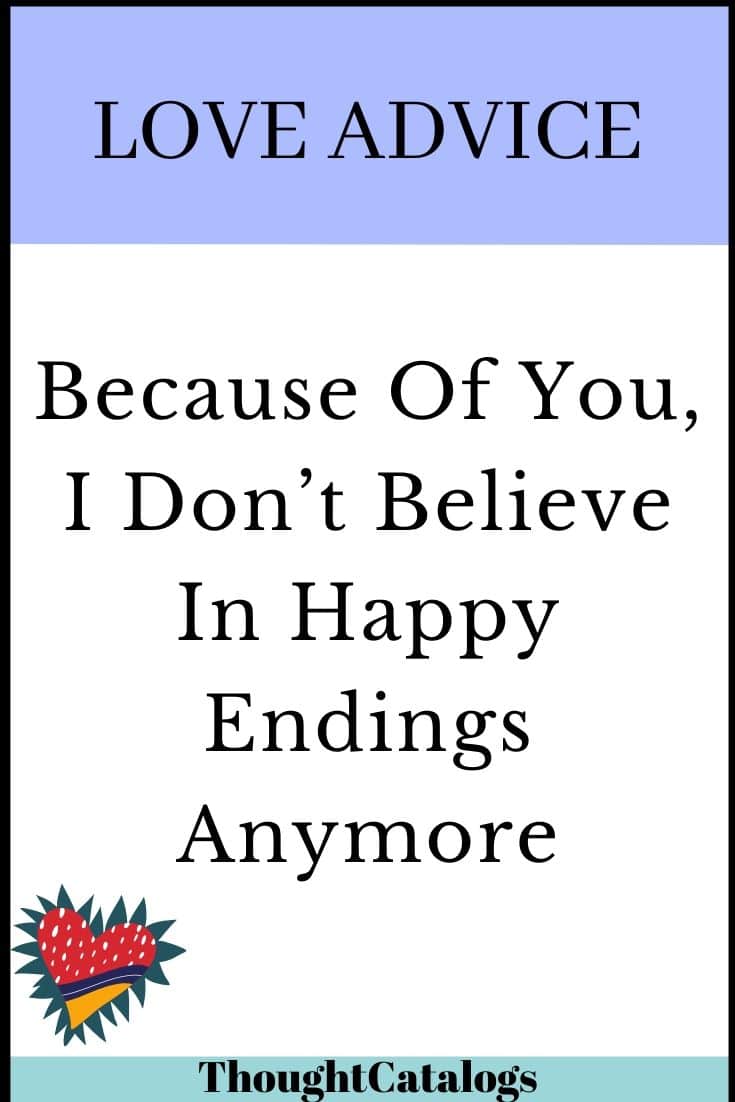 I used to be this innocent little girl who always believed in love. I believed in people and I believed in the power of good. And most of all, I believed in the power of love. Although everyone around me kept telling me I was foolish and naive and that I was living in a dream, I didn’t allow anyone to shatter my own reality. People kept calling me a hopeless, old-fashioned romantic but that didn’t bother me much. I knew I would find my soulmate, someone who I would spend the rest of my life with.

When I say I believed in love, I am not trying to tell you that I thought love was perfect. I didn’t think my Prince Charming would come to my rescue and I knew love wasn’t always a bed of roses. But what I did believe in was that love could conquer everyone and everything that was in its way. I believed that everything was possible and achievable if love between two people was strong and honest enough.

And I really believed that this man would cross my path. You may say I had unrealistic expectations and that I lived in a fairy tale but I never wanted to become a part of this modern concept of dating. I was always an all or nothing kind of girl and I refused to settle for less.

Until I met you.

When you came into my life, you shattered all my beliefs into pieces. You represented everything I didn’t like in people and everything opposite to me. You were a man who didn’t believe in love and you made that very clear from the start. You were a man who thought he could rely on himself only and a man who didn’t get attached easily. But silly me didn’t believe any of this. I thought you needed to be loved for real and that it would make you realize that love really was the most important thing in the world. I knew I was a loving and caring girl and I thought I could prove you wrong. I was determined to show you what you were missing out on because you kept yourself protected from love.

I’ll never know what you saw in me or what attracted me to you. I guess we both thought we could change each other’s views or that we could meet each other halfway.

But sadly, that never happened. Before I knew it, all of my standards and strong relationship deal-breakers were long gone. You managed to change the essence of who I was and everything I believed in.

We never met halfway but you did change me. I suffered a lot with you, because you never loved me the way I wanted to be loved. But I don’t blame you for that. I respect the fact that you were honest from the start and the fact that you never promised me much. But that didn’t prevent me from expecting much.

I don’t even blame you for walking away from me. You were someone who never knew how to stay and it is something I always was aware of, no matter how hard I tried to fight it.

But the fact is that you changed the essence of who I was. You made me just like you. You turned me into a negative woman full of bitterness.

Because of you, I lost trust in the the people around me and especially in men. Since you left, I realized I could only trust myself completely. I realized most people are selfish, no matter how much you give to them.

What She Needs Is A Man Of Action, Not A Man Of Words

You Deserve Someone Who Is Going To Love You Even In...