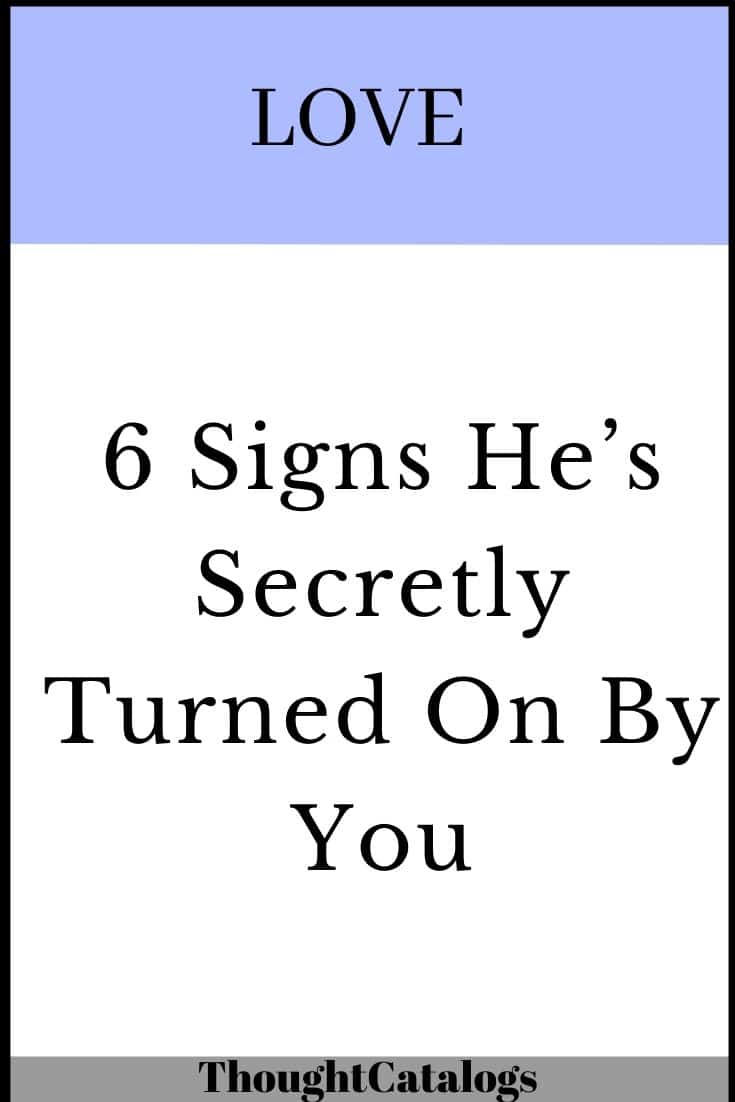 Are you having problems figuring out whether he likes you? Do you turn him on? Maybe you’ve found a few tell-tale signs, but you are still not sure if it is all in your head or there’s really something there.

You know, guys pretty much act like girls do. It’s time to blow off the stereotype that guys don’t need the courage to pick up girls whenever and wherever. That’s not true. Most of them hide it for some time and scout the situation first—as girls do.

I even bet that women have even more guts to walk up to a guy then guys do to women.

They are terrified and they are doing everything in their power to hide it. Although you may not notice right away that this is how they act, if you observe them more carefully, you will see what I am talking about.

Here are some signs he is secretly turned on by you but won’t admit it—yet!

Every time he’s near you, he turns red like a tomato. He’s so into you and even though he’s trying to hide it, he’s not doing such a great job.

That chemistry is driving him crazy and he cannot control his body reactions and his hormones. His body aches for you.

In a room full of people, it’s his stare that you’re going to feel. He’s giving you that dirty s*xual look. He’s taking your clothes off with his eyes.

Even though he is still a bit embarrassed to admit you turn him on, that doesn’t prevent him from feasting his eyes. He can’t help but wonder how good you look without your clothes.

It seems like he can’t avert himself from the s*x topic. Everything you talk about he connects with s*x.

Experts say if someone is s*xually interested in you, that his pupils dilate when he talks to you. Try to examine his pupils under the radar while he’s talking to you.

If they are bigger than they are supposed to be, he’s definitely turned on by you. Well, either that or he’s high.

There is no inch of your body that he hasn’t scanned and examined.

He knows how you walk and how you talk. Every time when you are not looking, he’s checking you out from head to toe—taking in all your powerful, s*xual beauty.

6. He hangs out with you

He makes excuses just to be around you. He volunteers to do stupid and boring tasks no one would take just to be in your company.

He takes advantage of every possible chance he gets to soak up your beauty and feel your s*xuality.

7. He loses control over speech

He starts to blabber. It’s like he has lost the ability to talk and his whole vocabulary got reduced to yes and no.

It’s not his fault, really. His hormones and the fact you attract him s*xually make him do that.

This Is the Type of Guy You Never Crush On, Based on Your Zodiac Sign

5 REASONS WHY YOU PUSH AWAY THE ONE YOU LOVE

The Relationship Advice That Each Zodiac Sign Need To Hear

How Dangerous You Are In Love According to Your Zodiac Sign

How The Zodiac Signs Deal With Emotions

I Need You To Figure Out What It Is That You...

ThoughtCatalogs - June 4, 2019 0
Please, spare me those cheap phrases that you feel something towards me, but you are just not sure what it is. Feeling something is...