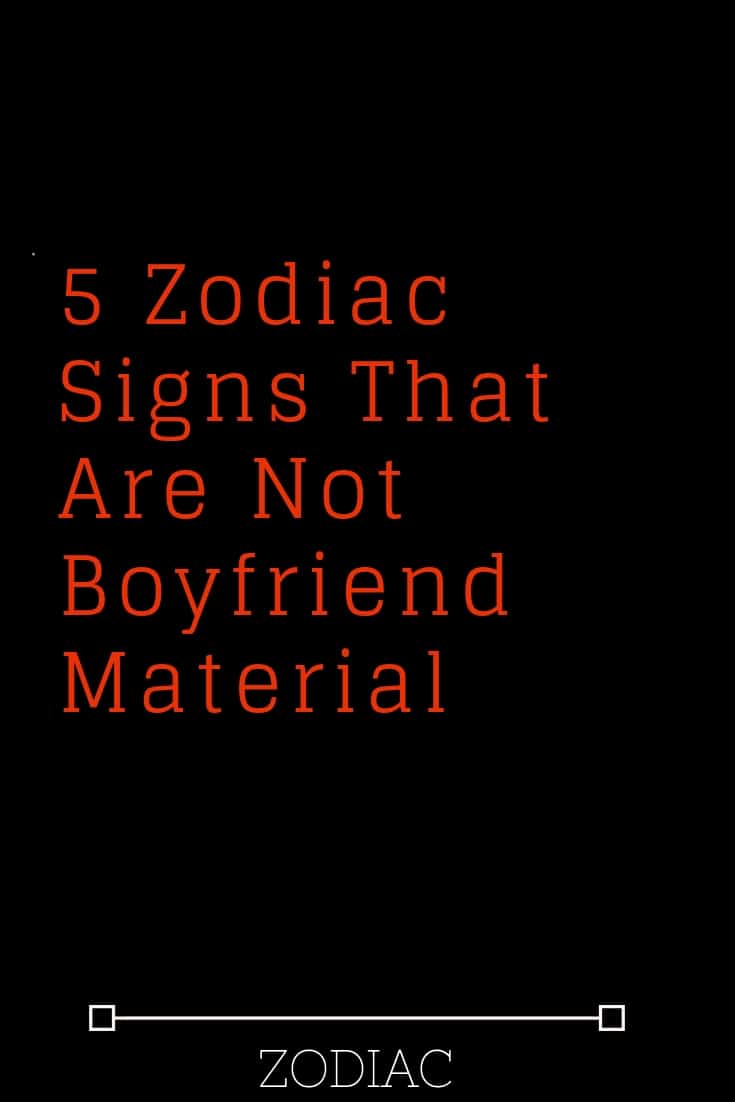 Sure there are always exceptions to the rule, but there are a few zodiac signs that are not predisposed to be good boyfriends. It’s not written in their stars.

Check out which ones are they:

Virgo men are really not made out of boyfriend material. They think they are always right and they love to argue to make their point. They are also known for being a bit nitpicky which can really drive their significant other crazy.

Upon the first glance, one would say that they are an epitome of confidence, because they are very vocal and like to brag about their achievements but they are just doing it to cover up their insecurities.

They have some great traits too. They are highly intelligent, organized and possess a great sense of humor.

However, their tongue tends to quicker than their mind and they have the habit of pushing all the wrong buttons. They will realize what they’ve done and apologized later on but by then it will be too late.

A Taurus man is characterized by stubbornness and that alone makes him unable to find a common ground with his partner.

He usually acts like he is doing his girlfriend a huge favor in just being in her life. He tends to be a bit bossy and only does things that suite him.

He won’t think twice before sharing the issues he might have with his significant other in front of his friends and family, which is wrong on so many levels.

He won’t cheat on his partner though. According to zodiac, a Taurus is one of the most faithful signs. He is also honest, hardworking and reliable so there is some material to work on even though it’s going to take a lot of time and efforts.

They have a habit of overthinking, planning the future before it even starts and having all sorts of expectations for their relationship.

But while that’s great in fantasy land reality is something completely different. You can’t control how people act in certain situations. You can’t predict their every move. You can’t burden them by your rules.

That’s why Pisces have a hard time sustaining the relationship. Their significant other is bound to get exhausted from chasing their visions and feeling like they are not good enough.

To realize why an Arian is a lousy boyfriend material it’s enough to say that he is dominant and short-tempered and a relationship with him can become so messy and hard to handle.

There are some good sides of an Aries man too. He is gutsy, the eternal optimist and very loyal. But that easily gets overshadowed by his tendency to boss people around and treat them like his minions.

He expects a woman to bend over backward to fit his needs and busy schedule. The paradox in all of it is once a woman becomes so compliant and accommodating he will get tired of being with her in no time. Until he sorts some things out in his head, no woman will be happy by his side.

Scorpio is one of the most passionate zodiac signs and women are easily hooked on his mysterious nature and sex appeal.

But the moment things start to get more serious, a Scorpio will run for the hills. His fear of commitment is so strong that he will spend a better part of his life running away from love.

Also, communication skills are not something a Scorpio man can brag about. He doesn’t like to talk about his feelings or speak his mind.

That’s why his significant other is always in some kind of a limbo where she doesn’t know what’s going on in that mind of his.

Sure, he might be ready for a meaningful relationship one day, but no one knows when that day will arrive not even him.

This Is Why You Should Fight For The One You Love

These Zodiac Sign Is Doing Wrong In Life (December 2020 Edition)

NASA says you’ll still be your zodiac sign, we all breathe a sigh of astrological relief

When Should You Get Married, According to Your Zodiac Sign?

How You Act in Your First Relationship, Based on Your Zodiac...

ThoughtCatalogs - August 2, 2019 0
Whether you're in your first relationship or believe that one is on the horizon, chances are you're wondering how things will go. If you've got questions, we've...