5 Signs He Is Afraid Of Loving You

When you are looking for clues that a guy is in love with you, you assume that he’ll send you some direct signals about his feelings.

But that doesn’t have to be the case with every guy.

There are some situations in which a man is even growing to love you but is terrified of that and he tries to battle his feelings so here are 5 signs this is exactly what is going on with your guy.

1. He sends you mixed signals

One of the worst things you can experience when it comes to a guy you like is him sending you mixed signals.

There are times when this guy acts like you are the love of his life and when you don’t have any doubts about his feelings for you. And then, all of a sudden, this man starts acting like you don’t exist.

But although sometimes his mixed signals mean he is not interested and although they can mean that a guy is just leading you on, sending mixed signals can also be one of the signs that he loves you but that he is simply afraid of expressing his feelings.

2. He has a lot of emotional baggage

Most men who are afraid of verbalizing their emotions are also afraid of facing them themselves. But something like this rarely happens without a reason.

If you know more about this guy, you probably know that he has been hurt in the past. It means that there existed a woman in his past whom he loved very much.

But this woman caused him a lot of emotional pain and that made him put his guard up and build emotional walls around himself. He simply thinks that every girl who comes into his life will treat him the same and he decided it’s best to keep everyone out.

This man obviously has a lot of emotional baggage and deals with abandonment trauma, which makes him behave like this.

3. He is nervous around you

When a man is scared of how much he likes you, he simply can’t be relaxed whenever he is in your presence. This guy probably won’t do much about his feelings but he won’t be able to hide them and one of the first things that will tell on him is the way he behaves around you.

It means that he will be nervous every time he sees you. This man might bite his nails, his legs might be shaking or he may simply play with his hands. Either way, these are all signs of his affection toward you.

He is obviously fighting his feelings and he’s having a hard time doing so. Every cell in his body wants to get closer to you and wants to do something about his emotions but he is simply scared and his fear is blocking him from making any kind of move.

Besides, he is scared that you’ll realize that he is falling in love with you and that he isn’t doing a good job hiding his emotions and that is the last thing he wants. He needs to preserve this image of a tough guy because he thinks it is the only way he’ll keep himself safe.

But actually, he is doing completely the opposite because his nervous behavior is something he obviously has no control over. Of course, he can’t be relaxed in a situation where he is struggling with himself but that only tells you enough about the depth of his emotions.

One of the first things which might show you a guy is falling for you but is scared of it is his body language.

There exist things which we can control and our words is one of them. No, this guy never told you about his feelings but his eyes and body signals are things that show you the real situation.

No matter how much he tries to hide his feelings, it is more than obvious that this man can’t control his body whenever he is around you.

The first thing which tells on him is his eyes. He can’t help but stare at you. But whenever you notice this and when you look back at him, he is the first one to look away.

Whenever the two of you are together, he is somehow near you. It is obvious that his body has an uncontrollable urge to feel your skin and to touch you in any way, despite the fact that his mind is trying to protect himself from you.

5. He is jealous and protective

When a guy is scared of loving you, he won’t tell you anything about his feelings.

But at the same time, he will be protective and jealous and those are things he wouldn’t display if he didn’t have strong feelings for you.

Of course, he won’t tell you about his jealousy straightforwardly but you’ll definitely be able to sense it. He’ll act like no other guy is good enough for you and he’ll always worry that someone might hurt you and that is a definite sign of his feelings for you. 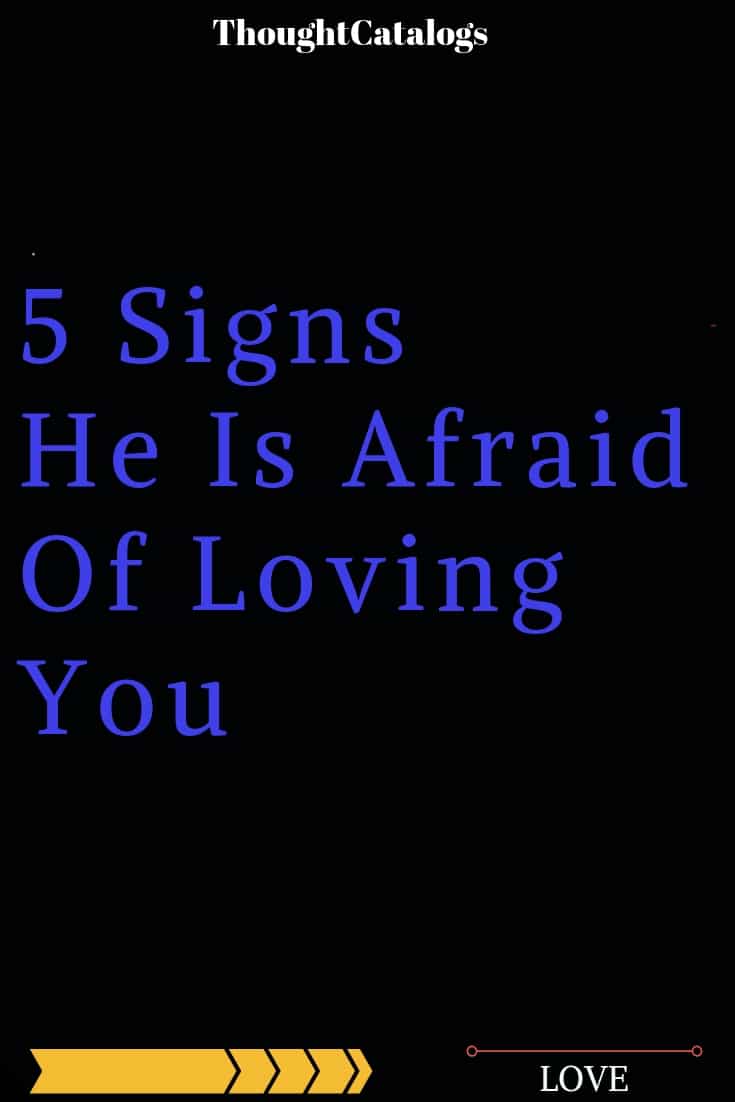 No BS women don’t let others manipulate them, and they simply know how to stand up for themselves. They may be loud or even...

THIS zodiac sign had the most s*xy time in 2020

If you’re one of those people who counts on Zodiac signs to tell them, well, pretty much everything about your life, now’s the time...

On July 11st, we will feel something different in the air, something that makes us believe in magic and that maybe we haven’t drifted off...

Love may be the focus of countless songs and movies and novels, but most of us agree with the idea that you never know...

Zodiac Pairs That Make The Most Disastrous Couples, Based On your Zodiac Signs

Have you ever been through a connection where you place all your initiatives to make it a harmonious one, however, everything entered vain? Despite...
𝐓𝐡𝐞 𝐭𝐡𝐨𝐮𝐠𝐡𝐭 𝐜𝐚𝐭𝐚𝐥𝐨𝐠𝐬 is an Educational & Entertainment Platform theme. Our Team Publishes 100+ Content On Weekend/Monthly. We will motivate the needs of any person & make them inspire instantly You, Will, admit Once You Begin Your Journey With Us. The Thought Catalogs platform is a perfect choice.
© Copyright © 2022 - All Rights Reserved | TheThoughtCatalogs.