After so many broken hearts, I swore to myself that I would never fall for a guy who wasn’t going to love me to the fullest. I tried to fix them, to heal them when they told me that I could help them only if I stayed. This resulted in me being broken down by all those emotionally unavailable and abusive men. But one of them, he did the best job when it comes to breaking someone’s heart.

We met at a party. He was drunk and started telling me about how his girlfriend cheated on him with some asshole that he called his friend. So, he lost both of them. I knew what he was going through and tried to comfort him, but he wanted me to take a walk with him. Take in consideration that he was very drunk and very honest about everything. He told me how he wasn’t sure if he could ever love again. “Why should I? It’s only a waste of time!” he was yelling at the top of his lungs and asked me afterwards if I was thinking the same thing.

This is the point where I started telling him how love is an amazing thing and that the only problem was that he didn’t find the right woman to be in love with. She didn’t appreciate him, but if he continued searching, he would eventually stumble upon a wonderful partner who will be more than happy to have him in his life.

He looked me dead serious in the eyes and came a bit closer to me.

My heart started racing and I couldn’t breathe. What was he going to do?!

I will never forget the way he smiled at me and touched my cheek so gently. It was almost like a dream. He continued talking about how he thinks that finding that one person might actually be really easy now.

And he kissed me.

This night was more than wonderful. We spent it together and in the morning, he was very nice to me, telling me that he had never fallen for someone so quickly. He made us coffee and we continued talking about the party and our little conversation.

That’s when we decided to go on a proper date!

He was continuously telling me how he wasn’t sure if he wanted a relationship. He didn’t think that it was something he could do now, although it had been awhile since he broke up with his last girlfriend. But I didn’t want to rush it. He seemed so nice, loving and caring. Also, I wanted to feel needed. He was constantly telling me how he needed someone who’d be there for him and fix him. I wanted to be that someone!

From time to time, I would ask him to define our relationship. But at the word ‘relationship’, he’d start panicking and wouldn’t even want to talk to me for hours afterward.

Through time, I saw the walls around him building up even more. I started to wonder who was the man I fell for?

He would smile at girls in bars just so they could come up to him. I was sitting next to him, listening to all those times he told them that I was only a friend. Well, it’s the truth.

He was one of those people who preferred being friends with benefits rather than being in a committed relationship.

One morning my friend texted me that she saw him on a dating website and that he even tried to flirt with her. I looked it up and there he was. His picture—there was no doubt about it and the caption said something like “single and ready to mingle”. When I confronted him about this, he told me that it was none of my business and that I shouldn’t be putting my nose in his life. He told me everything he could just to make me realise that he didn’t love me. I wasn’t his ‘someone’. “Why would I fall for someone like you?!” It hurt. A lot.

I’d like to say that I walked out of his life right after this fight, but I didn’t. I stayed. For too long. I stayed to watch him flirt and make out with other girls, never realising how much he hurt me. He was always avoiding the topic of our relationship and that’s when I realised that he truly was emotionally unavailable. I should’ve seen it at the beginning. If your partner is emotionally unavailable, there’s nothing much you can do but run! Pack your stuff and run!

I’ve learned it the hard way.

You might have fallen in love with him so it’s not that easy to let go. That’s why I’m giving you 10 little tips on how to survive an emotionally unavailable man:

Be aware of the feelings you have at the moment. If you feel hurt and vulnerable at a certain moment, take time off to feel good again. If this means to leave him and run off, than DO IT! You will cry less, I promise you.

2. Get to know him better

There is a slight possibility that there is hope for him. He might change. Ask all the questions you want without being afraid of his answers. Be confident and make him talk to you. If he avoids your questions constantly, it’s just a sign that it’s not worth trying.

3. You can’t heal him if he doesn’t want to be healed

As much as you’d want to, you can’t fix him. I have learned this the hard way. Being emotionally unavailable means that the person shuts down their emotions and you can’t even come close to him.

4. Don’t apologize for your feelings

I truly believe that being able to express your feelings and showing vulnerability is a true sign of strength. You don’t have to apologize for it! Express them in all the ways you need in order to feel at peace!

5. Tell him right away what you want

Tell him at the beginning what you want from the relationship and that you’re not ready to settle for anything less than what you want because you deserve it. If I’d known this, I would’ve saved myself all the time and energy that was wasted.

6. Be happy and independent

If you’re not depending on him, you might as well just leave when you realise that he’s emotionally unavailable and there’s no fixing it. I was very dependent and that made me unhappy. I didn’t have my own personality because I let him define me. Biggest mistake I ever made!

Maybe he’s willing to change and he might tell you that he his but that he needs time. Give him the time he needs but know that you can’t wait forever.

8. Pay attention to his actions, not his words

His actions might not be the same as his words. His words may be kind and promising but his actions show emotional abuse. He might tell you that he’s trying to change but he still cheats on you? Well, why are you waiting? Why are you still with him?

9. You aren’t a failure if you didn’t manage to make it work

I really did struggle with this one. I thought that if I just loved him enough and had enough patience that it would work out. Emotionally unavailable or not. I loved him. It’s the only thing that mattered to me. So, I thought that we could work things out and be a happy couple. But no. He didn’t let me past the walls he built up around his heart and it’s fine. It’s not my fault.

This one is very simple, if you love yourself enough, you won’t ever let anyone have a higher priority rather than yourself. You’ll appreciate your life in a way that you won’t want to waste your time and energy on someone who’s not worthy of it! 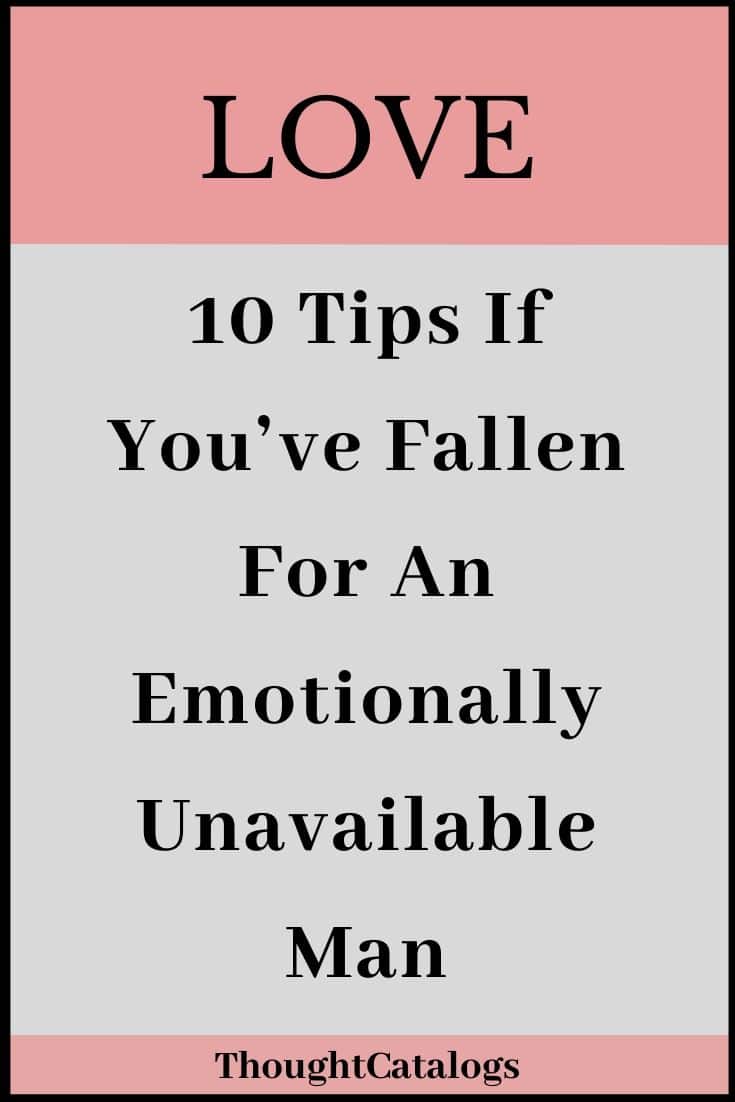 The 3 Zodiac Signs That Will Have The Most Epic November

The Ultimate List Of Fake Love Quotes And Sayings