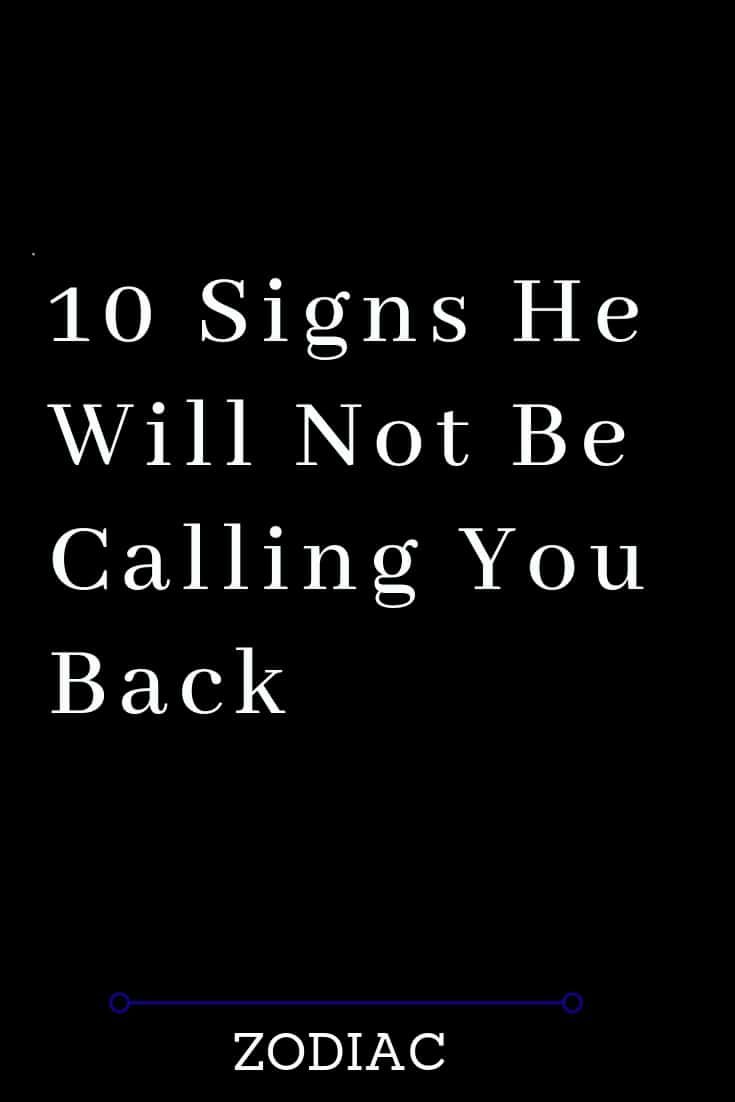 Dating is, without a doubt, one big uncertain jungle that will always force you to overthink and spend endless hours waiting for those expected calls and texts. So, you’ve been on a date with a guy you’re crazy about, you’re one hundred percent sure that the date was successful, and it turns out you’re right about it.

Or you’ve been on a date with a guy you’re crazy about and even though you think the date was successful, you’ve never received a call from him. Then you start thinking about what could have possibly gone wrong or what you possibly could have done to ruin the chances of him asking you on a second date.

But, the worst part of all is stubbornly waiting next to your phone and still hoping that the guy will call you, when deep down in your soul, you know that you’re just postponing disappointment.

To prevent yourself from this intoxicating anticipation next time you find yourself waiting for a call, here are 10 signs he will not be calling you back, so you definitely shouldn’t bother wasting your time on waiting for him!

1. There is no conversation chemistry

But, if the majority of your time spent together was filled with awkward silence and forcing of the next topics, then he’ll probably not be calling you back.

It is totally understandable that people have their own opinions on certain topics and in that case, contradicting becomes inevitable. But, if there are constant arguments between the two of you on even the most trivial topics, then it is evident that you lack connection. In that case, you shouldn’t be expecting his call.

3. You said something wrong (or he did)

The date was pretty satisfying until one crucial point where you said something wrong (or he did), there was this awkward silence for a minute or more, and you didn’t know how to escape the embarrassing situation.

The moment you said it, you knew that your date would end badly and you saw it in his eyes as well, but still there was hope that he will call you, even though deep down in your soul you knew he wouldn’t.

4. He keeps conversation friendly but not flirty

If a guy is one hundred percent determined to keep the conversation friendly and avoid any signs of being flirty, his intentions are probably different from what you might have thought. By doing this, he’s subtly letting you know that he likes you on a friendship level, but he’s not really attracted to you on a deeper level, and that is why he won’t want to call you back.

5. He starts talking about how busy he is

If you’ve let him know that you would like to see him again and the moment you said it, he immediately started mentioning how busy he is, then you know he’s just making excuses so that he doesn’t feel obliged to call you. Making excuses is closely connected with not being interested in a second date. That is his way of telling you this politely.

6. He isn’t really interested in your life and doesn’t tell you much about his

If a guy is not interested in your life, preferences, hobbies, job, friends and family, and anything else, then he’s not really interested in getting to know you better. Also, if he refuses to tell you about his life, it also means he’s trying hard to maintain the distance between you because he’s probably only interested in a one night stand.

7. He’s late and he doesn’t give you a warning

If he knew that he was going to be late and he didn’t tell you a shit about it, it means he deliberately decided not to give a fuck about how you will feel about it. His intentions are definitely not to be trusted and you surely shouldn’t be wasting your time waiting next to your cell phone for his call.

8. Spends more time looking around the room than you

If you’re wondering how to decipher a fuckboy, just look at his behavior when you’re in a public place. Do his eyes often wander and does he find it hard to concentrate on you? If yes, it means he’s not really interested in spending time with you, his only intention is to get into your pants. And if he doesn’t call you, you should consider yourself lucky.

9. Walks in front of you on your date

If a guy evidently avoids walking next to you or avoids holding hands on a date, he’s trying to be “invisible.” He walks in front of you because, obviously, he doesn’t want to be seen on a date with you. And he won’t be calling you so that he doesn’t ruin his future potential dates with other women. Lame, I know.

It is really hard for any man who enjoyed spending time with you not to give a goodnight kiss at the end of a date. Summarized, if a man is genuinely interested in seeing you again and again, and if he intends to call you, he will give you a goodnight kiss without you even reminding him of it. But, if he’s not, he will just awkwardly leave the premises.

Why Ghosters Always Return And Exactly How To Manage Their Returns

How To Heal Your Body Using Astrology

Give Me That Old School Love

ThoughtCatalogs - September 14, 2019 0
The new year is right around the corner – and that means new opportunities for a fresh start. If you feel like certain people...