Are you a steamy Scorpio looking for a long-term relationship? A dreamy Pisces aspiring to work in a traditional corporate environment? A Virgo wanting to have friends?

Please, keep your zodiac sign to yourself. Zodiac-shaming — the practice of treating someone differently and punitively because of their astrological sign — isn’t a total joke. You never know when someone will judge you for your cosmic family tree.

It feels a bit laughable to hyphenate “zodiac” and “shame,” when so many other forms of shaming — body, sex, grammar — are infinitely more severe and pervasive. But when someone is denied a resource or labeled undateable because of their zodiac sign … well, if that’s not discrimination, we can at least agree that it’s bad.

A few years ago, my partner was finishing up a screening interview for an apartment when the conversation took an oddly personal detour. Up until that point, things had been going well: She had excellent financials, an enviable credit score, and a genuine camaraderie with the landlords. She was reportedly sailing through the screening until their final question — what, exactly, was her sign?

Their tone was serious. Not knowing the consequences of what she was about to say, she revealed she was a Pisces.

My partner could see the reaction in their faces: they were devastated. The interview ended immediately. Shortly after, she was denied the apartment with no explanation as to why.

Pisces are known as flighty dreamers who struggle to meet deadlines and professional obligations — including, presumably, rent payments. Though my partner can’t prove definitively that her denial was zodiac-based, neither can most people who suffer from some kind of bias. (Almost always, it has far more serious consequences than this example.) Comb through Twitter or your personal networks and you’re sure to find stories of people refusing to date someone or struggling to work with someone because of their zodiac sign.

“I would legitimately never date a Libra,” astrology fan E.S. revealed to Mashable.

Scorpios, who are believed to have high sex drives, are particularly at risk. They’re “darkly emotional” creatures with “hyper-sexuality,” one blogger writes in a post, “And That’s Why I Don’t Date Scorpios.” “Scorpio is the most sexual sign of the Zodiac,” Elite Daily explains, adding that “dating a Scorpio isn’t for anyone.”

Elle goes even further in a piece confidently entitled, “Which Sign You Definitely Shouldn’t Date.” Geminis definitely shouldn’t date Scorpios, the writer argues, because: “Scorpio demands exclusivity and fidelity before you even kiss … With their willpower and manipulative charm, you’ll quickly become the sub to their dom.”

The anti-Scorpio sentiment is seemingly universal:

“I was legitimately really suspicious of Scorpios for a really long time after my first big heartbreak in college,” one astrology fan, M.C., told Mashable. “I  believed so much in the dark-sided, secretive, deceitful energy of Scorpios that I actively avoided dating them.”

Look, you can deeply believe in astrology and all its cosmic manifestations (or not!) and still be unnerved by zodiac-shaming. Hard lines can signify hard prejudice. Grouping people into astrological categories is one thing; rejecting them outright because of them is another. People are more complex than their signs. C’mon now.

“That’s as old as Ptolemy!” Renstrom exclaims. “There are centuries of material written about Saturn that’s clearly anti-Semitic … Saturn became the planet of the Jews and the planetary ruler of Capricorn and Aquarius … and people went onto distinguish [those signs] as money-loving, cheap, thieving.”

Renstrom argues that the bias ancient civilizations once held about planets has since been transferred to zodiac signs. Newspaper astrology, which took off in women’s magazines in the ’20s, “really promoted sun signs over the planets,” Renstrom says, and made it easier to draw “clichés” and “stigmatize each of the signs.”

Here’s how Alex H., whose ex-partner loved astrology, saw it:

“My ex CHANGED my time of birth when she read my chart because my actual chart says I’m a triple Aries. She wouldn’t believe it, so she changed the time to 15 minutes later,” Alex told Mashable.

As a Virgo, I’ve also been prey to some of this stigmatizing after I’ve revealed my sign. I’ve been advised that I’m “obsessively organized” even though I have a bag of garbage in my closet with my birth certificate in it and once found an old egg salad sandwich under my office desk. I didn’t even know it was missing.

Friends believe that I must be a “secret perfectionist” even though I use a bib when I eat soup and spent two years of my life as a low-wage children’s birthday party entertainer.

These are slightly shame-y and largely innocuous judgements. As a personal astrologer, Renstrom has seen clients use astrology to make similarly generic and largely undeserved judgments about people. They may actively seek to date someone with an opposing sign on the grounds that opposites attract. (In the astrological world, they often don’t — fire signs, for example, are more likely to match with other fire signs than with water signs. Opposites don’t necessarily attract in this universe.)

There’s real prejudice about signs that aren’t good with money, Renstrom adds. Meanwhile, Virgos have an advantage in the workplace because they’re thought of as great managers.

This kind of typifying behavior can have real-world consequences, though astrology isn’t the only school of thought to suffer from this affliction. Renstrom points to strict Freudian psychoanalysis which exploded in the ’70s and which, like astrology, became so popular and casual it was easy to hide prejudicial patterns of thought:

“Maybe because astrology is so playful it makes it insidious too … it’s not astrology that’s at fault but there are deeper and darker strains,” Renstrom explains.

In China, zodiac discrimination is a well-documented problem. A 2017 study found that 4.3 percent of college students surveyed reported suffering employment-based discrimination because of their astrological sign (Western and/or Chinese). Constellation-based recruitment has its own entry in Baidu Baiku, otherwise known as Chinese Wikipedia.

Close to 30 percent of Americans now believe in astrology, a number that’s been rising steadily. Who knows how long it’ll take before zodiac discrimination becomes an institutionalized problem here?

Who knows how long it’ll take before zodiac discrimination becomes an institutionalized problem?

Not all forms of labelling or grouping are bad. You can still use the zodiac to make judgements about people, Renstrom argues, but they should be holistic, non-prescriptive observations — ones that take people’s whole selves into account. Instead of writing people off because they’re Scorpios or Geminis, Renstrom encourages people to consider their full, complex characters. Scorpios *might* be hypersexual, but they’re also loyal partners. People are their sign, but they’re also far more than their sign. Behavior exists on a spectrum. Just because Virgos are thought of as anal doesn’t mean they all want a vacuum cleaner for Christmas.

Writing anyone off without taking time to know them isn’t just unethical, it’s a boring way to live.

“Astrology can be a guide to plumbing the depths of a relationship. You can respect someone’s life experience as being different from yours [without judging it],” Renstrom says. “The most beautiful thing astrology can give you is the ability to the see the world through another person’s eyes.”

The planets don’t do this kind of crap. Neither should you. 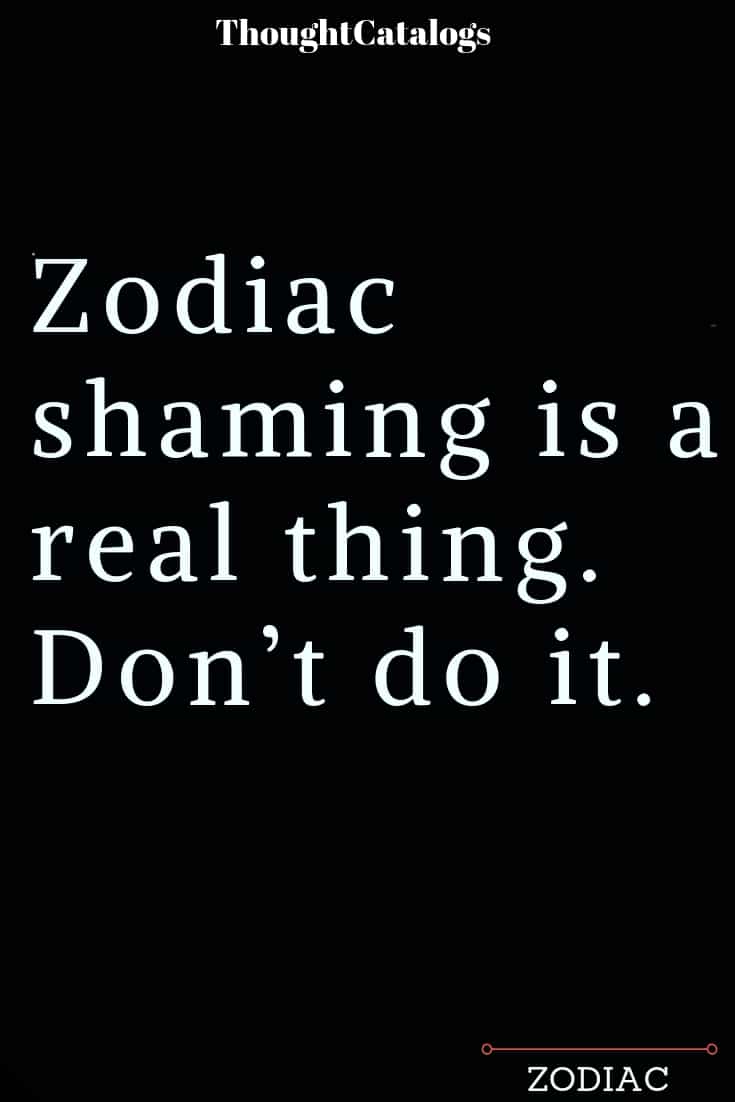 The 5 Most Emotionally Unpredictable Zodiac Signs