Your September 2020 Love Horoscope, Things Are About To Get Intense

August was a roller coaster in itself but September brings hope. When it comes to love you never know what to expect. The month to come holds a lot of mystery for us all.

The month of September is going to begin pretty quickly for you. Everything will be quite busy despite the need to slow down. You are going to be trying to keep your mind on other things but someone is going to be catching your attention.

Whether it is someone you’re meeting for the first time or someone you’ve known for a while you’re going to be looking at them in a completely new way. Perhaps this is a feeling you haven’t felt in a while?

The power of seduction is really going to be coursing through your veins. While you might be lacking in some areas you are going to be learning a lot as time goes by. Don’t get too in over your head.

The month of September is going to be making you feel disconnected from the person you care about the most. You need to take this time to really try and make things right.

Don’t be too clingy or hover, but do try and make a real change in the relationship whether it is old or new, it is one worth fighting for.

The month of September is going to really bring you down in more ways than you are willing to admit for the first couple weeks.

While you will be a little more understood you will still be fighting off the remnants of the retrograde that just ended of Mercury. While spicing things up with someone you’re interested in might not be the first thing on your mind, it’s going to happen.

As the weeks continue on your September will turn into something pretty great. You’re going to be charming the pants off of someone, quite literally. I wonder who that someone could be?

The month of September is going to be a month in which you spend all your time trying to impress others, as usual. You really need to stop wasting your time, but for some reason never seem to learn that lesson.

There will be plenty of opportunities before you but, chances are you’ll ignore every single one of them.

The month of September is going to come with a lot of arguments for you and the person you care for the most. These arguments are going to help you two to become the couple you both want to be.

If you don’t talk these things out, you will be doomed. Really work on things as best you can. Put your ego to the side and get back in there.

The month of September is going to bring for you a lot of fun and commitment. You are going to be doing things you never thought you would.

While you’re normally not the romantic type you’re going to be outdoing yourself this time. Shaking things up is going to really put you even more-so in control.

The month of September is going to bring you before something you really don’t want to deal with. Dealing with this is going to change your life in one way or another. Don’t run away from this, face it head on and hope for the best.

The month of September is going, to begin with, you learning something you never expected and from there, things will continue on in mystery.

You are going to be growing much closer to the person you love the most and things will finally be falling into place. The life you’ve always wanted is within grasp.

The month of September brings a lot of responsibility for you to deal with which, let’s face it, is not your strong point. Spend more time preparing and less time ‘having fun.’

This is not a game. When it comes to love, you should probably focus on something else if you want to succeed.

The month of September is going to bring you a very promising point of temptation. Whether or not you give in is going to change everything for you.

Sure, pushing boundaries is normal from time to time, but you’ve got to know your limits. Be careful, this might be a mistake that you regret forever.

The month of September is going to have you dealing with a lot of conflict in your close circle. Friends and family might be mad at you over something you’ve done.

The month of September is going to help you big time. It is going to bring you to better communicate with someone that has been misunderstanding a lot of things you’ve been saying for the past few months.

Clearing things up and getting everything out in the open might save the connection you have. 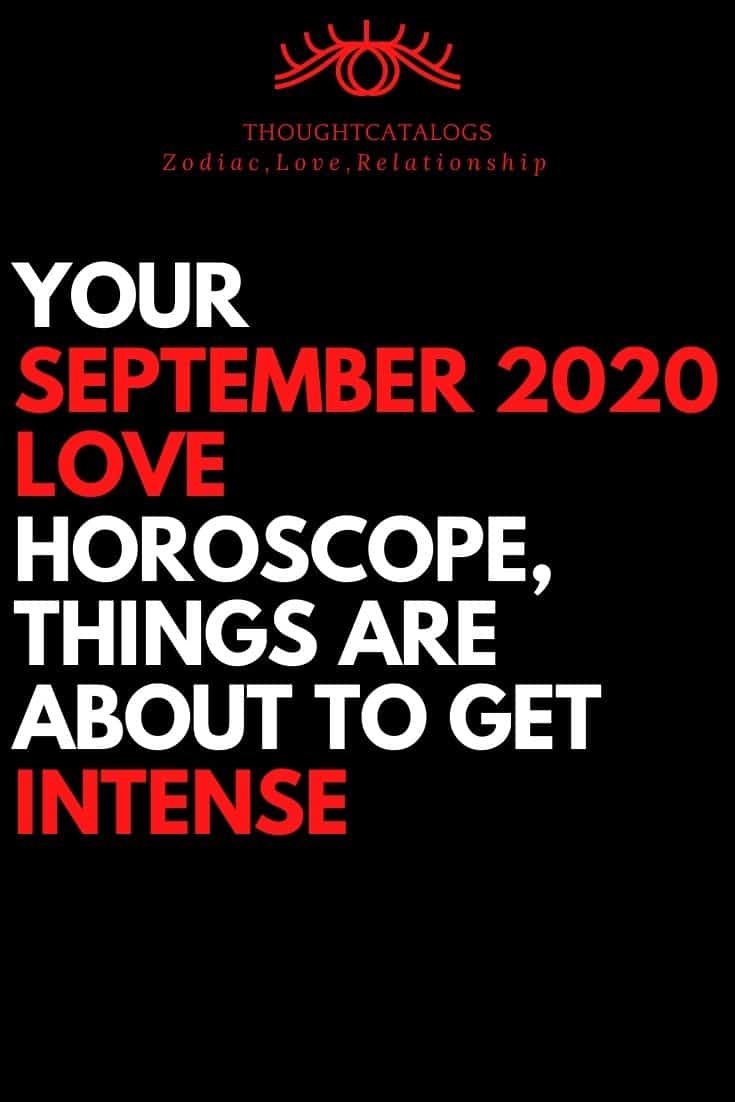 Horoscope Means For Your Love Life And Relationships In May 2022

If you desire it, pursue it. On February 28th, the Sun in Pisces will certainly s * textile Mars in Taurus, amplifying our power as...

3 Ways To Find Out How Much He Likes You

When you meet a guy, it is very difficult to find out if he likes you. It would be great if we could enter...

Beginning Thursday, you will certainly experience the better dynamics of the new week. Not whatever will certainly go according to plan and not every...

“I love you without knowing how or when or from where. I love you simply, without problems or pride.” ~ Pablo Neruda Unconditional love is not...

Should You Date Someone With The Same Star Sign As You?

Whether you’re a true believer or not, there’s something seriously magical about star signs. If you’re reading your monthly horoscopes with a pinch of...
𝐓𝐡𝐞 𝐭𝐡𝐨𝐮𝐠𝐡𝐭 𝐜𝐚𝐭𝐚𝐥𝐨𝐠𝐬 is an Educational & Entertainment Platform theme. Our Team Publishes 100+ Content On Weekend/Monthly. We will motivate the needs of any person & make them inspire instantly You, Will, admit Once You Begin Your Journey With Us. The Thought Catalogs platform is a perfect choice.
© Copyright © 2022 - All Rights Reserved | TheThoughtCatalogs.