Entering the dating world can be intimidating. You might not even be sure of what you really want (does anyone really?)

But even if you don’t have a good idea of what you are looking for, you probably know what you want to avoid.

Here are some of the most unattractive qualities in a partner based on your zodiac sign.

Aries (March 21st-April 19th)
Let’s be honest – you love to be in a position of control. This is because you know how to take charge and do it the right way. As a headstrong and confident person, your biggest turn-off would be any man who is manipulative. Anyone who tries to control you is not the person for you.

Taurus (April 20th-May 20th)
As a Taurus, you are very grounded and reliable. You find it exhausting when someone is constantly going in all different directions. You can’t stand people who disrupt your sense of stability, especially liars.

Gemini (May 21st-June 20th)
You are a social butterfly. People are drawn to you because of how friendly and talkative you are. You live in the moment, so you’re peeved by a man who can’t share your love of spontaneity.

Cancer (June 21st-July 22nd)
You are drawn to people who are able to empathize with you, seeing as you are one of the most emotional signs. You find it incredibly unattractive when someone comes across as arrogant or untrustworthy.

Leo (July 23rd-August 22nd)
As a Leo, you love the spotlight. You ooze positivity and confidence. Because of this, you find it irritating when you encounter a man who is negative and self-serving. Anyone who tries to bring you down from your pedestal isn’t worth your energy.

Virgo (August 23rd-September 22nd)
You are known for being practical and goal-driven. You can’t stand it when people aren’t interested in improving themselves. If he’s lazy, unmotivated or irresponsible, a Virgo is sure to turn around and walk the other way.

Libra (September 23rd-October 22nd)
Libras are notorious for being cooperative people. You won’t find it attractive if a man is stubborn by nature and likes to cause conflict.

Scorpio (October 23rd-November 21st)
As a Scorpio woman, you have trouble opening up to new people at times. Earning a Scorpio’s trust is hard work. That’s why your biggest turn-off is a dishonest man.

Sagittarius (November 22nd-December 21st)
Those of your sign are known for being curious, funny and generous. You have a deep appreciation for the world and you love to explore new places. You definitely won’t like a man who’s dead set in his ways.

Capricorn (December 22nd-January 19th)
As a Capricorn, you have a strong sense of self-discipline. You are incredibly reliable and responsible. Because of this, you stray from irresponsible, wishy-washy men.

Aquarius (January 20th-February 18th)
As an Aquarius, you are incredibly strong. You tend to enjoy doing things on your own because of your independent nature – you blaze your own trails. You dislike any man who is overly clingy or needy. The person you’re with needs to respect your boundaries and give you plenty of alone time.

Pisces (February 19th-March 20th)
Your sign is known as the most compassionate of the zodiac signs. You approach every situation with an open mind. Your biggest turn-off is a bossy, narrow-minded man, since this directly goes against your kind and receptive nature. 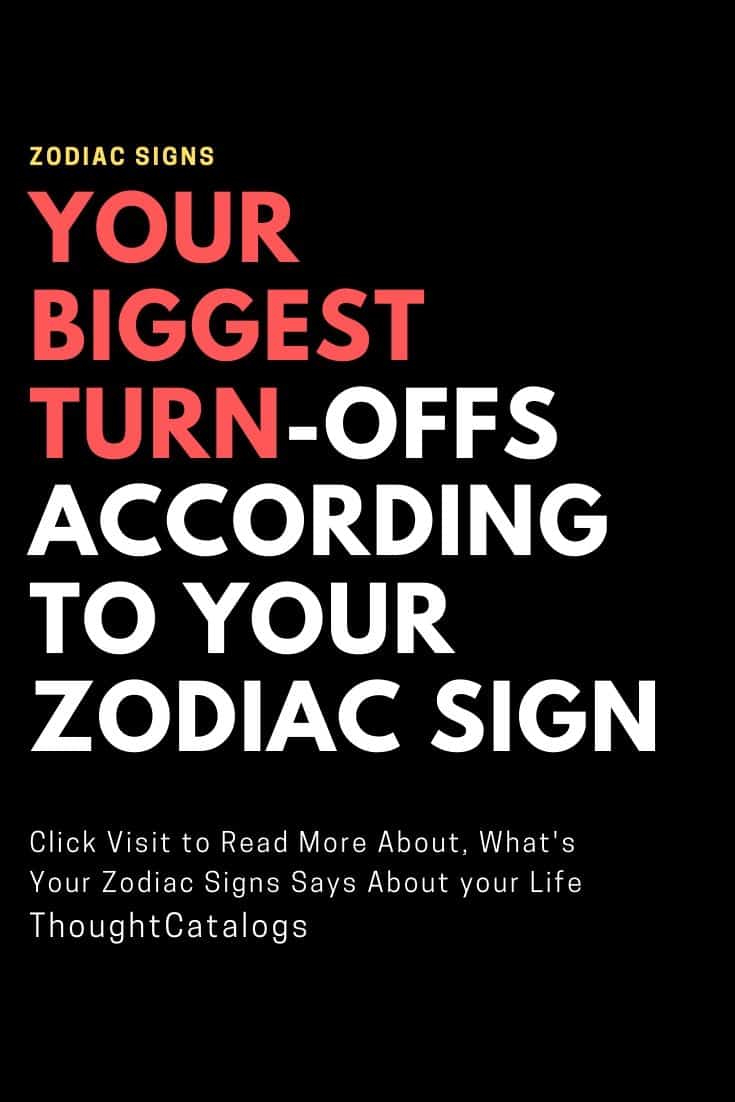 You Never Get Over Losing A Loved One, You Just Get Through It

These Zodiac Love: Sooner Or Later These Zodiac Signs Have To Be Together, Based On Zodiacs
2 days ago