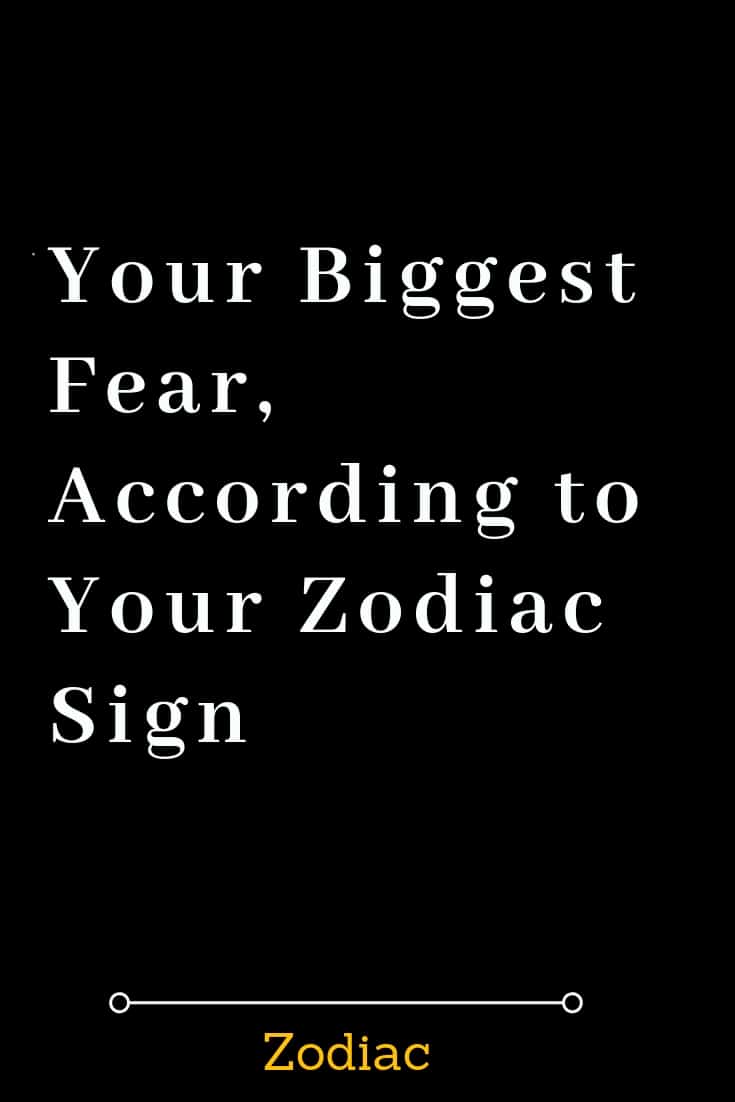 Even the bravest lions among us are scaredy-cats deep down. It’s part of our origin story: Somewhere in our development we stumbled upon something that became our eternal boogeyman. Most of us harbor a phobia or two (snakes, small spaces, germs), but we’ve dug a little deeper into the one thing that probably scares you more than anything else—broken down by zodiac sign, of course. Read if you’re feeling courageous.

ARIES: BEING TOLD WHAT TO DO

Aries are the boss babies of the zodiac, meaning that they are babies, and they are bosses. Aries need to call the shots in their own life because taking orders is never on the table. An Aries lives and dies by their ability to make decisions and make moves. If they are blocked from taking the reins, especially by bureaucratic red tape or someone who doesn’t share their love of action-based solutions, it fills them with deep, primordial dread, which often takes the ancient form of tantrum.

For the zodiac’s bull, a stable routine is like oxygen: disrupt it, and they cannot breathe. Taureans require order and predictability not because they lack imagination (au contraire, they are an aesthetic bunch), but because change is messy and terrifying. Chaos means they are stuck at square one, finding their footing over and over again without being able to take a second and third step. To them, that’s not an exercise in growth; it’s a Sisyphean hellscape.

Geminis are known for their extremes. Vacillating between opposite poles is befitting of the twins, after all. But the fear at the root of Gemini’s chaos is boredom. Their heightened curiosity will supercede their sense of personal safety, leading them to set all kinds of fires just to have something interesting to do. An idle Gemini is a threat to society and themselves, so please, for the love of all that is holy, entertain them.

Cancers are the most fearful signs in the zodiac. The crab is all about protection from the deepest, most formative childhood wounds of all. Usually, they involve some primordial sense that our parents will not always be there for us, and the world is actually not a warm and loving womb but a hostile and dangerous place. Just know that if you ever need to run an errand, you better ask them to come, because they’re low-key panicking that you won’t return.

LEO: THAT THEY ARE UNLOVABLE

Leos are all about self-expression and authenticity, and ultimately, they just want to be loved for who they really are. (Note: That’s why Madonna has reinvented herself so many times.) But as they peel back the layers of their identity, they risk not liking what they discover. The worst fear a lion could confront is that they don’t even like themselves. After all, how will anyone else love them if they don’t?

VIRGO: THAT THEY ARE UNWORTHY

Virgos are the opposite of humblebraggers. They would rather die with zero recognition for excellent work than EGOT for something they considered subpar (this is only slightly an exaggeration). The virgin is concerned primarily with ethics, and part of the reason they confidently wield their critical eye is because they’ve made damn sure they can live up to it. The fear of failing their own tests of integrity is why they work so hard in the first place.

LIBRA: BREAKING UP (…WITH ANYONE)

Libras believe in partnerships, because what we can accomplish with others is so much greater than what can be done alone. This applies to any alliances forged, not just marriage. And each union, whether it be friend or cousin or partner in life or partner in joint venture, is tinged with the threat of a future breakup. No relationship lasts forever, and on some level, a Libra is a little traumatized by what is lost when one becomes two again.

The Scorpio operates in private, because, hey, it’s no one’s business how they got their ex’s social security number or competitor’s patented formula or the evidence they need to indict a sitting president. A Scorpio’s power is rare, and letting others in on their secrets dilutes their value. So living in a panopticon where every move is traced would be unbearable for them. Unless they were the only ones who had access to the cameras…

Sagittarius is like Belle waltzing through her little French town square, wishing for far-flung adventure. The sign of the archer is all about variety: cuisines, languages, culture, academic subjects, religion, etc. When it comes to human culture, their appetite is infinite. So, feeling locked down in a rigid or parochial environment—even one they like—without getting to explore other options is the equivalent of a horror movie.

Capricorns are eternal hustlers, yes, but what are they hustling for? The money, the fame, the legacy? Yes to all, but there’s more to it. Capricorns understand the preciousness of time more than any other sign. They know what they are capable of and that this life is the only one they get. (Alexander Hamilton? Yep, famous Capricorn.) Squandering their dreams because they needed an extra hour of sleep? That nightmare will wake them faster than any alarm.

The Aquarian ethos is born out of the anxiety of feeling like you don’t belong. For the zodiac’s resident aliens, no one is too “weird” to get a seat at the table…or at least a seat at some table, somewhere. The Aquarian vision is always macro; they want a world that tolerates all kinds of freaks and geeks. Because no one deserves to be put in a corner.

The last sign of the zodiac is, of course, most terrified of the ultimate threat: death. Pisces energy is all about dissolving borders—reality versus dreams, fiction versus fact, body versus spirit. So the border between being alive and being dead is very much a place they live—and it’s harrowing to toe that precipice. Their world-famous sensitivity and intuition are developed in direct response to the darkest parts of life that plague them.

These 5 Astrology Signs Do Not Give A Damn

How Astrology Replies To Your Routine Questions Easily