A real man will never leave you guessing about the role he intends to play in your life.

A real man is always upfront about the role he wants you to play in his life as well.

Only a toxic man plays with a woman’s feelings.

Only a toxic man has the audacity to get the best out of a woman and then leave her high and dry.

How do they sleep at night knowing that they broke the hearts of the women who were hoping to be chosen, who deserved to be chosen?

The most cowardly excuses always come from men who are not ready to take responsibilities for their actions.

How many times have you heard, “She was the one who wanted to give me her all, but I never asked for it!”? This is a load of crap, excuse my French.

If he didn’t want anything from you, he should’ve made sure you were aware of that.

If he didn’t want to use you as he said, he should have stopped taking your kindness, because in his acceptance of your kindness and all the things you did for him was a silent promise that you two were meant to be something more.

Only a coward, a poor excuse for a man, would lead you on for a long time without any intention of being with you. But it’s not your fault, as he mastered this kind of game a long time ago.

You gave him your years. What you had going on wasn’t just blink and it’s over. It was so much more than that. It was days, weeks, months, years of your time and of your hope.

It was many sleepless nights when you waited to be chosen and where there was plenty of indication that you deserved him, but his final decision never came.

You gave him your love.

You gave him your smile and your laugh and your hand and your heart. You were there for him.

You were able to sense when there was something wrong in his life and you always knew what to say at a certain moment. You were always ready to save him when he came to you, wounded by the world. No matter what he needed, you had it. Even when sometimes he had no idea what he needed, you knew for him.

You were his guiding star in life. You were the one who helped him get to the place where he can be found now. You invested so much in him and what did you get at the end? A full bag of nothing.

He never asked for any of what you gave him, but he never said he didn’t want it either.

He never asked anything of you out loud but he still expected that you give him what he needed. The only reason he never said it out loud was so he could keep his conscience clean when those things happened.

He wanted to be ‘clean’ when you came to him to charge him for all the good you did for him.

When you came knocking and asking for more in life, when you asked him to give you what you deserved and what you’d been giving to him all this time, he didn’t have the decency to give it to you.

He didn’t have the decency to choose you and when you got fed up, he distanced himself by saying he never asked you for anything. He didn’t ask for it, but he sure as hell expected it.

What does a woman as devoted, as gifted, as kind and as loving as you want from such an excuse for a man?

Let’s be straight up, shall we? If he had any intention of choosing you, you would have been chosen by now.

If he wanted to reward you for your loyalty and for all the times you were there for him when nobody else was, for all those times you chose him over yourself, it would be a done deal by now. But he didn’t.

The worst part of it is that you yourself are aware of this but you keep refusing to accept it.

You are a smart woman. You allowed yourself this time not to be stupid, but to be led by your heart and by a hope that one day he would see the worth in you and that he would value you for who you were and what you did for him.

You hoped that he was a better man than he had shown you and you kept giving until the point where there was nothing more than you could give. And yet he didn’t have the decency to choose you.

Instead of him choosing you, he decided not to.

He decided to be a coward and selfish and he refused to commit. He wanted to be open to all the options that were there. But that was far from what you deserved or from what suited you. He secretly hoped that you’d eventually miss him so much and that you’d be ready to settle for less.

What he failed to realize is that once a woman like you leaves, no matter how much pain she might endure, she’s never coming back.

The only thing left for you to do is to prove to him what you’re made of.

You owe it to yourself to stop being exploited by a man who’s not really a man, but just a poor excuse for one.

So choose yourself. Choose to be your own hero. Choose to save you from the toxic relationship and choose to not settle for less.

There is a real man out there who will give you a place in his life. Stop choosing not to be chosen. 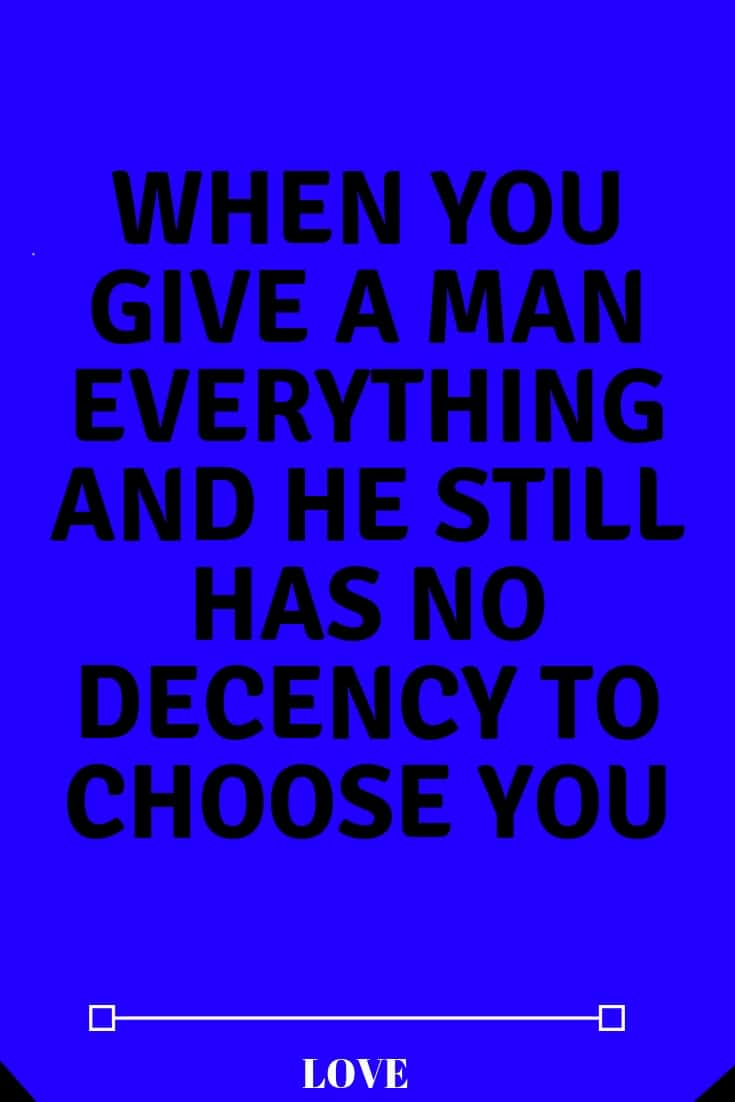 If You’re Feeling Romantic This Week, It’s Probably Because Of The Stars

Get ready because we are approaching a time which will make our romantic desires come true. Oh yes, this might seem over-the-top. But the...

These Are The 5 Most Toxic Zodiac Signs

1. Taurus This sign is obsessed with control and if they are in a relationship, they have to take care of every single detail. If...

The first thing you need to understand is that there are plenty of fish in the sea, so stop obsessing over that particular one,...

This Is Your Good And Your Bad Side, According To Your Zodiac Sign

Aries Good side: You look at the world with great optimism. There is no problem in this world that you won’t try solving. You’ve adventurous,...

We’re Calling Out The 5 Most Confusing Zodiac Signs

We all know at least one person who by no fault of their own is completely confusing. Astrology has an amazing influence on our...
𝐓𝐡𝐞 𝐭𝐡𝐨𝐮𝐠𝐡𝐭 𝐜𝐚𝐭𝐚𝐥𝐨𝐠𝐬 is an Educational & Entertainment Platform theme. Our Team Publishes 100+ Content On Weekend/Monthly. We will motivate the needs of any person & make them inspire instantly You, Will, admit Once You Begin Your Journey With Us. The Thought Catalogs platform is a perfect choice.
© Copyright © 2022 - All Rights Reserved | TheThoughtCatalogs.