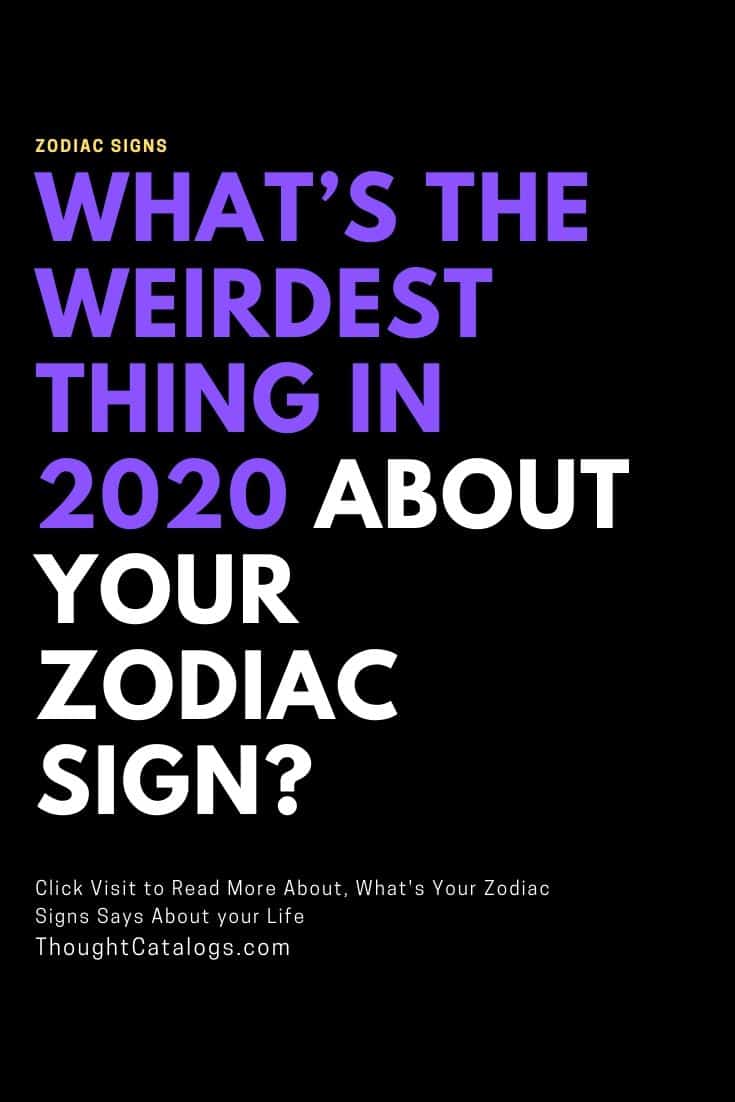 The Doors said it best: people are strange. That includes you! No matter how normal you may appear, everyone knows you have a quirky side.

While everyone is a unique little snowflake in the blizzard we call life, people born under the same zodiac sign tend to share similar personality traits. Whether you’re a skeptic or believe wholeheartedly in astrology, you have to admit, you can totally relate to some of the key characteristics of your sign.

Most zodiac sign readings point out your best and worst personality traits, but since humans are incredibly complex creatures, there’s more characteristics that comprise our personalities. Some of which may seem straight up bizarre to the other signs.

Here’s what your weirdest personality trait is, based on your zodiac sign. How true does it hold up for you?

Aries is completely uninhibited. You have tunnel-vision when it comes to the pursuit of what you want and you take the phrase “by any means necessary” to heart. You have no concept of what “no” means and it’s pretty impressive, despite being a little odd. They’re the friend that others envy because they’re so ballsy, but are simultaneously also slightly embarrassed to be around.

The world is all about senses for this star sign. Scent is a powerful signifier for them, so they have no chill when it comes to sticking their nose up to anything they see. They’re likely to have dozens of perfumes and body sprays for every possible occasion and have an emotional response to even the simplest of smells, like a sliver of wood or swatch of linen.

With all those big thoughts rolling around that impressive brain of theirs, they’re prone to talking things out with themselves before they do around others. The funny thing is that they also spend a lot of time responding to their self-discussion and laughing at their own jokes.

They may be private people to the public eye but Cancer has a deep secretive side that loves playing dress-up. Whether they’re donning their favorite superhero studs or turning elfin, cosplay is how they transport themselves out of reality and into the realm of fantasy.

Being a boss b*tch day and night can be exhausting. To offset intense demands, Leo places on herself, she’s most likely to experiment with body modification. Whether it’s tattoos, piercings or something much stranger, Leo enjoys having a secret on their body underneath those business clothes.

Since they already have a strong need to control the world around them, it’s only natural that Virgo would be drawn to pretending inanimate objects are real. These uncomplicated relationships allow Virgo to express their deep nurturing side, as well as manipulate the actions and thoughts of another—even if it’s make-believe.

Ever the lover, Libra lives for romance, even the imagined kind. Kissing themselves, a pillow or even the wall is not unusual for this passionate star sign. While they’ll probably be embarrassed if someone catches them in an amorous embrace with themselves, they’ll still enjoy every second of that smooch.

This feisty sign has the tendency to cyber stalk just about everyone they meet. Whether it’s because they like someone so much they want to learn more, or they can’t stand someone and want ammunition for the next time they meet, Scorpio is fully adept at using the internet to play detective.

Due to their free-spirited nature, Sagittarius is prone to many weird vices. The biggest is their obsessive need to stick their fingers in their mouths. Whether they’re eating with their bare hands, using their teeth to trim their cuticles or just plain ol’ sucking their thumbs, they have a weird finger fixation that probably began as a baby and won’t be going anywhere anytime soon.

This sign works hard and constantly strives to learn new things to stay relevant in their field. This leads to long hours and missed meals, which is why they’re mostly likely to develop pica, a disorder known for causing people to crave things that aren’t considered food. Whether they’re munching the morning newspaper or chewing leftover chalk, they’re the most likely to eat some weird sh*t in secret.

This day-dreaming star sign is a believer in the power of the universe and therefore, any chance they have to draw strength and energy from the world around them, they’ll take it. They’re most likely to hug a tree, hold a séance in a field, and even swim naked to commune with the fish and pay homage to Mother Earth.

Physical objects are more than just sentimental to this water sign, they are vessels that transport them to faraway moments and people who have long passed. Due to their profound love of emotion and memory, Pisces is most likely to become a hoarder who feels a strong connection to every single crumpled paper and cardboard box in their midst.

Who Is Secretly Love With You, Based On Your Zodiac Sign

If You Had Truly Loved Me, You Wouldn’t Have Made Me Feel Like I Wasn’t Good Enough

8 Sure Signs You Are Suffering From Narcissistic Victim Syndrome

Are You Maybe An Alpha Empath? These Are The Signs To Look For in 2020

How Hard Do The Water Zodiac Signs Love?

The Risk Each Zodiac Sign Should Take In June 2021