Sometimes you just need to rely on your astrology sign to get the ball rolling in bed. When nothing else seems to be working, it’s probably because you’re just trying too hard and your talents actually lie within you.

With that being said, it’s not really attractive when one is obviously trying too many tricks to be a rock star in bed. There are way too many sources out there that can possibly hinder your bedroom style as opposed to helping it. The best way is to be natural about it and come off like it’s no big deal so why not dig in deep and see what your style is according to your sign.

On top of that, everyone is different. After all, people have different taste and preferences. Perhaps what you are trying to accomplish in the bedroom might not be working for you because most likely it’s not your style and that’s okay. Once again, it’s better to just be all natural about it and find out what really is your bedroom style rather than changing things up that might make the experience worse.

Below, we gathered 12 things you need to know about your bedroom style according to your astrology sign.

Geminis are all about the creative side which means yes, role playing and toys can be involved and she’ll know how to use them to her advantage. There’s even some teasing going on but it’s nothing personal, it’s just a part of a Gemini’s bedroom style. She always wants it to be light and fun so there is a high possibility of her getting bored easily. But no worries, most of the time she’ll be the one to come up with the new ideas and won’t mind because it comes naturally to her. She not only has a creative side but also a humorous side which plays a big role into making things light and fun inside the bedroom. Not only is her activity level flirtatious but also her attire. She loves shopping for the best lingerie outfits because that is the ultimate cherry on top for making the experience fun and playful.

For Cancers, it’s almost like a romantic movie. You want everything you just watched on The Notebook to happen in real life for you. Regardless of it being frisky or more on the romantic side, you just want it to be perfect and real. All of that includes a lot of kisses, a lot of caressing, a lot of cuddling and of course, a lot of sweet talking. Cancers generally feel the most adored when someone is nurturing her and assures her she will be taken care of so it only makes sense that she wants her bedroom experience to happen like in The Notebook or in other romantic movies. While she’s expecting her partner to take care of her and fulfill her needs, she’s also being caring and making sure her partner’s needs are also taken care. Cancer is just more on the “motherly” side which means, she’s probably more of a long-term lover as opposed to a one night stand.

So when it comes to Leo, we know that you love taking leadership roles and want all the power in the world. Well, in terms of your bedroom style, it’s really no different as you want to make sure you’re in control of what’s going on between you and your partner. That doesn’t mean your partner cannot have a say in what you guys will be doing. It’s just a matter of being the center of attention and having a good amount of power. However, Leos are also known for their big egos which makes sense why they would want that power and all eyes on you in the bedroom. You want that validation in order to strengthen your ego and feel your most confident self. Can you blame Leo for wanting to feel their best self during sexy time? We didn’t think so either. Overall, Leos want to feel loved and pretty much the only girl in the world.

Virgos are generally the shy type and the ones who will blow you off as soon as she finds herself uninterested. But when she does find herself into the whole situation, she just might surprise us all in the bedroom. These are the kind of surprises men love. When you come off as this innocent girl at first but then someone different yet still carry your good girl side, guys go wild over that. One of the reasons why you might be shy at first is because you are the organized type and the one who achieves things. With that being said, before you make a decision especially with your sex life, you want to make sure this will be worth doing and how you are going to accomplish it and then surprise! You’ll feel so confident during sexy time that it will end so satisfying for you. The best way to go about it is to relax a little while making your decision.

Not exactly mental type you think but more so in terms of a mental connection. Libras are big on the mental stimulation she gets from her partner. You love getting aroused by someone’s hobbies, or something unique about them. When the two of you enter the bedroom, it’s about socializing from that point on. Yes, there is more talking involved than with the other signs but it’s mostly because that’s the Libra’s style. That’s how you get turned on. There is a lot of verbal foreplay and the aftermath is all about communicating thoughts about what just happened. According to Tower, a Libra is sure to get the guy fired up because of conversation and men love it when they can have a conversation with their partner or potential mate. So talking during everything isn’t always a bad thing. The best way to know that a Libra is talking because she’s turned on and turned off is by her tone.

Scorpios in general are passionate about everything they do. If they’re not into it, there’s not really a chance she’ll do it. As a result, Scorpios are super passionate with their sex life and it’s all about getting real deep. There’s really no particular feature that Scorpios like to take on the most. Overall, she likes it full-body on or else it doesn’t count. Scorpios want to get in touch with themselves and their partners so taking advantage of everything available to them is their number one priority. So casual sex isn’t in the cards if you’re a Scorpio. Good thing you naturally feel things deep so it’s not hard for you to feel passionate in the bedroom but that doesn’t mean a deep connection isn’t needed. It is very well needed to compliment the super intimate side of a Scorpio.

You’re open to new things and pretty much sexually liberated. Guys definitely love a girl who is not too picky but be careful, being too flexible can give off the wrong impression. But their spontaneity is a bigger positive than a negative in the bedroom. Sagittarius are overall charming and love to play. The worst thing they can come across is someone restricting their freedom. That is the ultimate turn off for the Sagittarius since they love experiencing new things. So if you love to do new things, it might also mean you get bored easily and sometimes your partner might not be able to keep up with that. So keep things light and fresh, but not too fast. It’s essential to have at least one go-to routine instead of being all over the place. But a few things that will for sure remain stable are your intellectual abilities and affection that drives men wild.

Capricorns are pretty much known to be conservative because they’re confident in what they want. They’ve always been goal-oriented so when it comes to the bedroom, they know exactly what they want to accomplish. However, being conservative might mean a lack of trying new things often but it’s okay because while you may not be trying out different ways to be pleased, the sex style you usually go for is top notch for you so you’re still getting it done in a satisfying way. Capricorns are pretty lovable lovers and have great sexual stamina. They do enjoy being sensual but not all the time in an adventurous side. It’s kind of a part of a Capricorn’s life to stick to a routine for a while before jumping into something new. They prefer to take advantage of the whole situation, in example a sex style, than going through it in a half-effortless way before they try something different.

It’s a fantasy world for an Aquarius. Much like movies, you love having the perfect romance played out except, you like to get creative rather than expecting everything to come out perfect. It’s important for your partner to give you options so you can contribute a little of your imagination while doing it and that is your type of fun in the bedroom. Aquarius is big on being original and innovative so same goes for their sex life. They can either jump from style to style or tweak some stuff from only one style. They just want to try new things in their own way which is definitely a turn on for men. Being imaginative can lead to a fun, quirky experience but overall it’s exciting for both Aquarius and their partner because things just keep getting more interesting. After all, that is the goal for you; to keep things alive and interesting in bed. 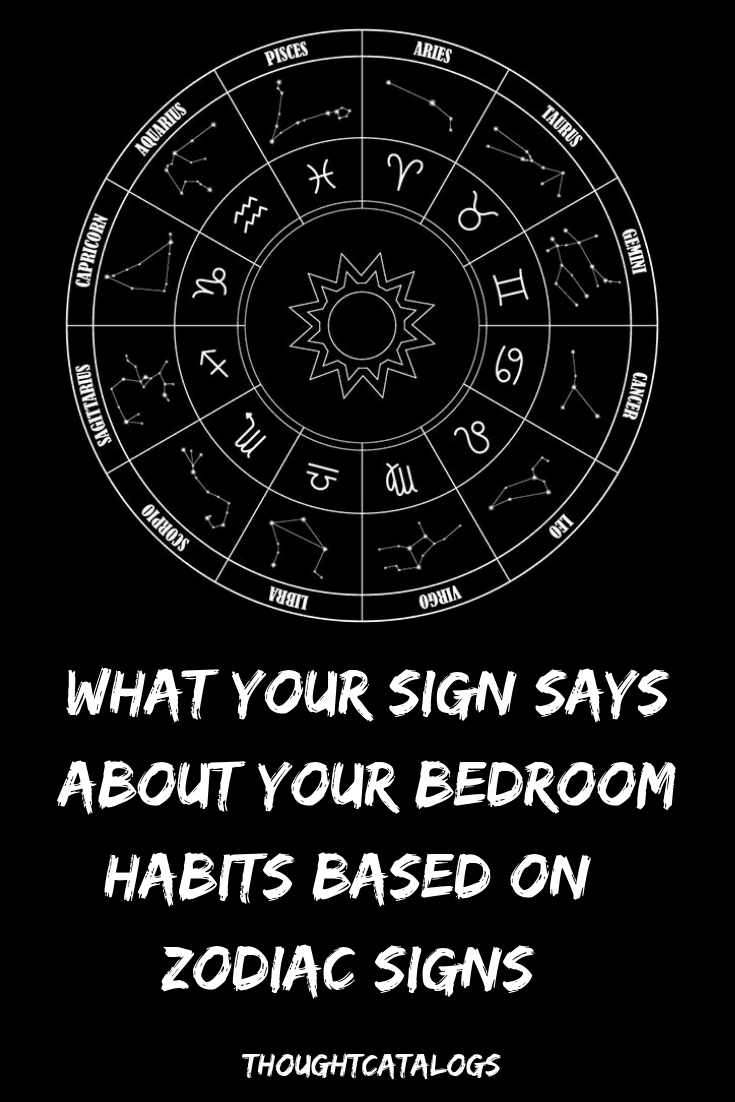 Your Love Language In 2022, Based on Your Zodiac Sign

Comprehending the five love languages can be fairly the essential force in boosting as well as recognizing your relationships. Based upon writer Gary Chapman's...

You will have expectations associated with crucial occasions today, which will produce tension sometimes. In the family, debates and also undesirable problems are feasible,...

WHICH 4 ZODIAC SIGNS ARE THE BIGGEST CHEATERS OF 2020?

Cheating seems like a part of everyday life because so many people do it. It has almost become normal to hear that someone cheated on...

The Kind Of Heart-breaker You Are, Based On Your Zodiac Sign

Aries Your pattern is falling madly in love and after a week or two, you simply get bored. You easily lose interest, especially if your partner...

Do men fall in love with perfect women with perfect bodies or is there more to it? The truth is the following: Men fall in love...
𝐓𝐡𝐞 𝐭𝐡𝐨𝐮𝐠𝐡𝐭 𝐜𝐚𝐭𝐚𝐥𝐨𝐠𝐬 is an Educational & Entertainment Platform theme. Our Team Publishes 100+ Content On Weekend/Monthly. We will motivate the needs of any person & make them inspire instantly You, Will, admit Once You Begin Your Journey With Us. The Thought Catalogs platform is a perfect choice.
© Copyright © 2022 - All Rights Reserved | TheThoughtCatalogs.