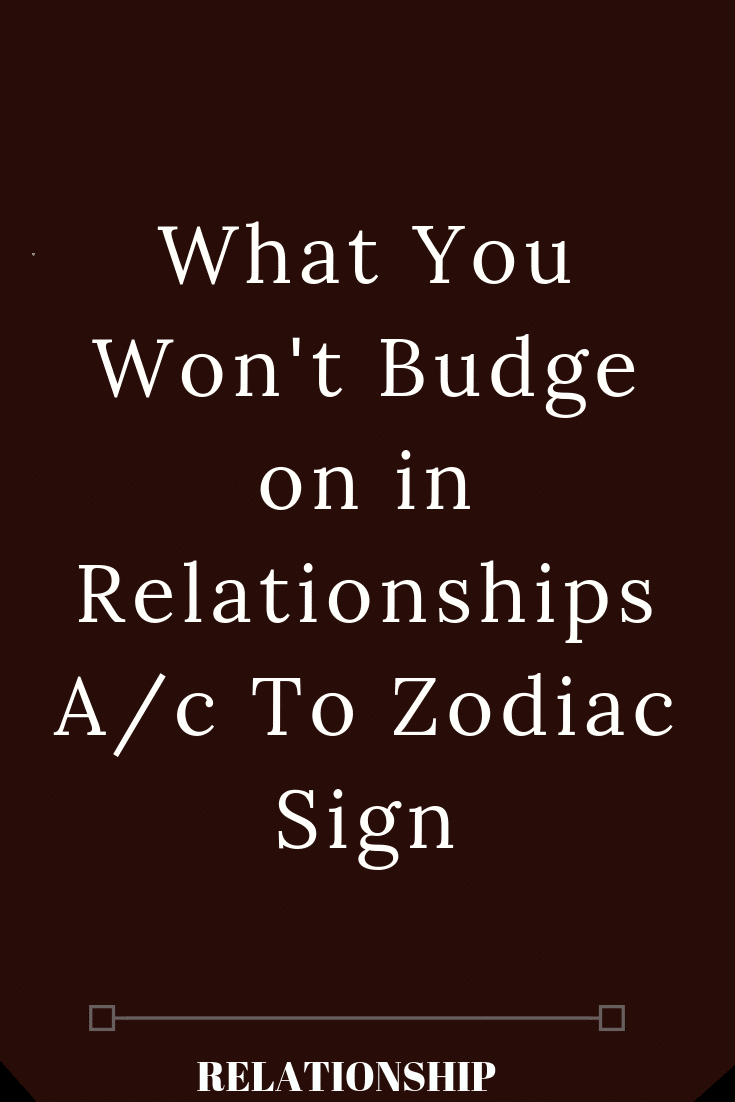 Facebook
Twitter
Pinterest
WhatsApp
Linkedin
ReddIt
Tumblr
Flip
Copy URL
Everyone wants different things out of their relationships, but there are specific things that certain types of people simply won’t compromise on. Read below to see if we guessed what you absolutely won’t stand for (according to your zodiac sign).

Aquarius (January 20th-February 18th)
Aquarius women need their men to understand that they place a high value on being free to do things on their own. You understand that being in a partnership means that some things will be shared – but you definitely need some alone time too.

Pisces (February 19th-March 20th)
As a Pisces, you are full of compassion- which is why you won’t be with anyone who doesn’t treat you (and other people) with the utmost respect.

Aries (March 21st-April 19th)
Like Aquarius, Aries also values freedom greatly. That’s why you’ll never settle for a needy man – you need to be with someone who’s just as driven as you are.

Taurus (April 20th-May 20th)
Taurus women need to have a sense of security in their relationships. The one thing you’ll never compromise on is reliability. You need an honest and trustworthy partner, otherwise you won’t feel comfortable enough to build a relationship with them.

Gemini (May 21st-June 20th)
Geminis thrive in social settings. You love to meet new people and share new experiences with them. You need to be with someone who also knows how to have a good time and is not afraid to crawl out of his shell.

Cancer (June 21st-July 22nd)
You have strong emotions but sometimes don’t know how to express how you’re feeling. That’s why Cancer women need their men to be very understanding.

Leo (July 23rd-August 22nd)
Just like Leos themselves, their partners have to have a good heart. If a man isn’t warm, welcoming or friendly, Leos won’t even give them a second look.

Virgo (August 23rd-September 22nd)
Even though Virgos are known to be perfectionists, they recognize that relationships aren’t perfect all the time. However, they absolutely won’t be with anyone who’s sloppy or lazy.

Libra (September 23rd-October 22nd)
As a Libra, you can’t stand negative people. You absolutely won’t get into a relationship with anyone who constantly tries to drag you (or others) down.

Scorpio (October 23rd-November 21st)
What a Scorpio woman needs the most in a relationship is comfort. If you feel like you can’t be yourself around someone, you’ll kick him right to the curb.

Sagittarius (November 22nd-December 21st)
Your idealistic nature will lead you to search for a partner who has an open mind, just like you. It’s incredibly important to you that your man is willing to explore new places and ideas.

Capricorn (December 22nd-January 19th)
Capricorns simply won’t stand for lazy and unmotivated men. You need your partner to be just as driven and ambitious as you are.

The Message Astrology Of April 2020 Has For Your Zodiac Sign

This Is Why You Run Away From Love In 2022, Based On Your Zodiac Sign