The golden rule for getting along with an Aries is not to let them wait. That is the thing that pisses them off and they can’t help but freak out every time something like that happens. If you made a deal that you will be at a certain place at 5 P.M. and you are late, an Aries will probably call you a million times just to check where you are. And don’t think you will get away with it so easily, because they will tell you everything that you deserve straight to your face. And no, next time you won’t even think about being late.

Don’t lie to them and don’t prepare surprises – only then will you be able to have any normal contact with a Taurus. They are very good at knowing what people actually think and if they spot a liar, they will do anything for them to be confused about the things they said earlier. They like playing mind games with people like this, and it is not because they are mean people, but because they can’t stand liars in their company.

This zodiac sign can’t stand authority. If you tell them what to do, they will do the opposite. If you tell them to speak, they will keep their mouth shut. That’s why they have problems at work and are often not credited for the work they did. It is often said that they have a sharp tongue and that they can’t suppress their feelings but deep down they are as good as gold. If it wasn’t for that rebellious characteristic they have, they would be perfect, right?

What this sign hates the most is when people take advantage of their kindness. They are known to be super-sensitive people and when they see that just because of that, someone takes them for granted, they totally freak out. They just can’t understand how people can be so cruel and lie to them, when all they want is to have a normal relationship with everyone.

‘Small things matter the most’ is a motto of this zodiac sign. They won’t be pissed off because their partner cheated on them but they will be freaked out when they see the toothpaste stains in the bathroom. AGAIN. Also, they will lose control every time they can’t park their car well or when it starts raining the second they leave the hairdresser’s studio. Things like this can really make them crazy but they can’t change that.

What this sign hates the most is when people don’t understand them. They can spend hours explaining what they love or don’t love and all they can see is people who are staring at them and being confused; it’s like they are speaking fucking Chinese. That is something that can piss them off in a second but the good thing is that they can calm down in a very short time. At least that’s something, right?

If you are a Libra, you will understand when I say that what bothers you the most is injustice. Why good people always finish last or why those good and decent couples are never blessed with children. You can cry about things like this and while you are thinking of reasons why this all happens, somewhere along the way, you realize that you can’t have any effect on those things. So, you just accept it and let go.

Don’t ignore them and everything will be fine. This sign hates to be ignored and they show that by screaming and swearing badly. If you ignore them, they will think that they are not worthy or that you hate them for something they did to you. But the real truth is that they often exaggerate and that things are not as bad as they seem.

They hate liars and dishonest people. They hate being stabbed in the back, when you don’t see it coming. They hate people who would do anything just to get what they want. They hate all those who think that material things are more important than emotional ones. They don’t like it when people pretend they are something that they are actually not. But at the end of a day, when they sit down in peace, they realize that they can’t fight something that is already meant to be doomed.

This sign hates it the most when people don’t respect them. They get so frustrated when they do someone a favor and that person disappears from their lives. They think that is hypocrisy and they don’t want to be in the company of those individuals. But they have a good plan, because you can trick them once but it won’t happen again. So you better watch how you treat Capricorns.

This sign hates any kind of bad service. No matter whether it is standing in line to pay the bills when the clerk shuts the payment window in front of you or when a waiter brings you the wrong order. I know those are just small things but for an Aquarius they are definitely a big deal.

This sign is quite strange because nothing can piss them off. I mean, small things can affect them but they can’t decide what it is that makes them angry. So their friends tend to joke with them that they should get angry at least once in their lives. And guess what? Those friends often get kicked in the nose for saying so. 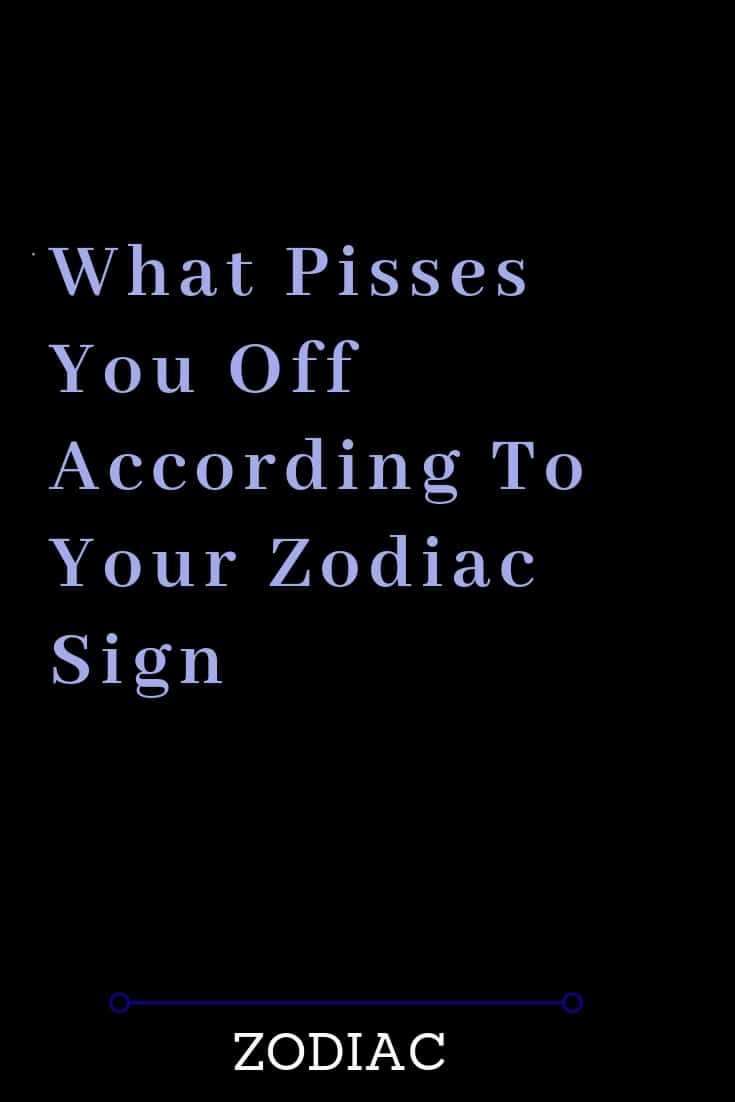 Here Is Why You Are Still Single, According To Your Zodiac Sign

What Type Of Drunk You Are According To Your Zodiac Sign