Facebook Twitter LinkedIn Tumblr Pinterest Reddit VKontakte Odnoklassniki
How many times have you heard someone saying “I’m fine”? How many times have YOU been the one to say these words? Although there are many different situations in which we have said or heard these words, there are a few categories in which we can align what she meant when she said “I am fine”. Depending on the situation that she or the two of you are in, you can try to decode the message in these five short notes. This is not a Discovery channel but mysteries are to be discovered, so stay tuned!

I am fine = Leave me alone

How are we to interpret the famous “I am fine” depends on the situation that we are found in as well. If you see a girl distanced from the others, deep in her thoughts, there is high probability that she is thinking of something really important, or even overthinking. What you shouldn’t do in these situations is to be pushy and ask her to speak her mind because that is exactly what she won’t do even if her life depends on it. In these kind of moments her “I am fine” means “Leave me alone” and I strongly advise you to do so. Sometimes we are not in need for other human being but we need a moment ALONE to analyze the situation and to reflect on our current state. We don’t need someone to create extra fuzz in our life. Give her a moment, and she’ll join you as soon as she finishes the conversation that she is having in her head. She is not crazy, she is fine and she needs a moment alone.

Let’s imagine there is this girl that just poured her heart open to you and you ask her how she feels. She is going to say that she is fine, but in that moment it is up to the person that is next to her to judge the situation and to act upon it. Sometimes it is better not to say anything but just to hug a person. If she just told you that she has family issues, or that she failed her exam and that she is struggling in life, and you are not much of a person that knows what to say, I think it’s much better to just keep quiet and give her a hug. It won’t kill you, don’t worry. Yes, it might be awkward at first, and seem as if it was fake, but wait till the warmth from your body releases dopamine, serotonin and oxytocin. (https://www.quora.com/What-happens-in-our-body-when-we-hug) These three neurotransmitters will say everything that you were unable to express with your words, and will send a message thousand times stronger than you could imagine.

I am fine = You broke my heart

Let’s not pretend to be ignorant and not to notice this one since this one is the easiest to notice. This one is very present in relationships and lives in general. It is often followed with the eyes full of tears that are barely restrained from falling down the cheeks. This “syndrome” is often there as a consequence of cheating, breaking up or mistreating the girl that just said these words out loud. The hard part is to reflect on your actions and see what you did that caused this reaction. As I already mentioned, the obvious one would be cheating or breaking up with her after which she would want to keep her pride and not show you how much you’ve hurt her. The others are humiliating her, forgetting something that is important or not understanding what she is trying to do or say, or just you being an asshole and then asking her if she is feeling fine.

How to spot this one? Well the situation points to the opposite of what is said completely. If you ask a mom whose kids are screaming while she is cooking the lunch and the phone is ringing, it is obvious that she is not fine and she can barely handle it all but she won’t ever say that. If you see a girl that just lost her job and doesn’t know how is she going to survive the next month, her “I am fine” is screaming “I am not fine”. Just try to put yourself in her shoes, and think – if the roles were switched, would you have been fine? The answer is one big NO. She just had a major fight with her best friend, she broke up with her boyfriend etc.. those are all things lead you to see a huge sign saying “I am not fine”. Every single one of us would’ve said the same thing. I guess it is our way to look towards the light that is to be found at the end of the tunnel.

I am fine = I don’t agree with you, but I don’t feel like discussing it anymore

Every girl was dragged into those never-ending conversations where she was trying to make a point or she was not agreeing with the other side, but the end of it wasn’t showing any appearance. At some point one of the two sides would just have to let it go and give up. If she says that she is fine with the decision after you couldn’t get to the same page with her, it should be obvious what she is doing. She is just too tired of hitting the same wall over and over again and not being able to get through it so she decided to give up. If she is quiet after this scenario, and if you ask her is everything ok and why is she shushed you will get a simple: “I am fine.”. Don’t get angry or anything, since you are the one to blame for her silence. A bigger dose of understanding and compliance could simply solve this issue.   There you have it, mystery is solved. It is up to you how much you care and how much you want to read those words and see what is really hiding behind them. All of this may seem hard to understand but it is up to you and your effort to decode the message. And your effort is as big as your caring towards that girl, as simple as that. 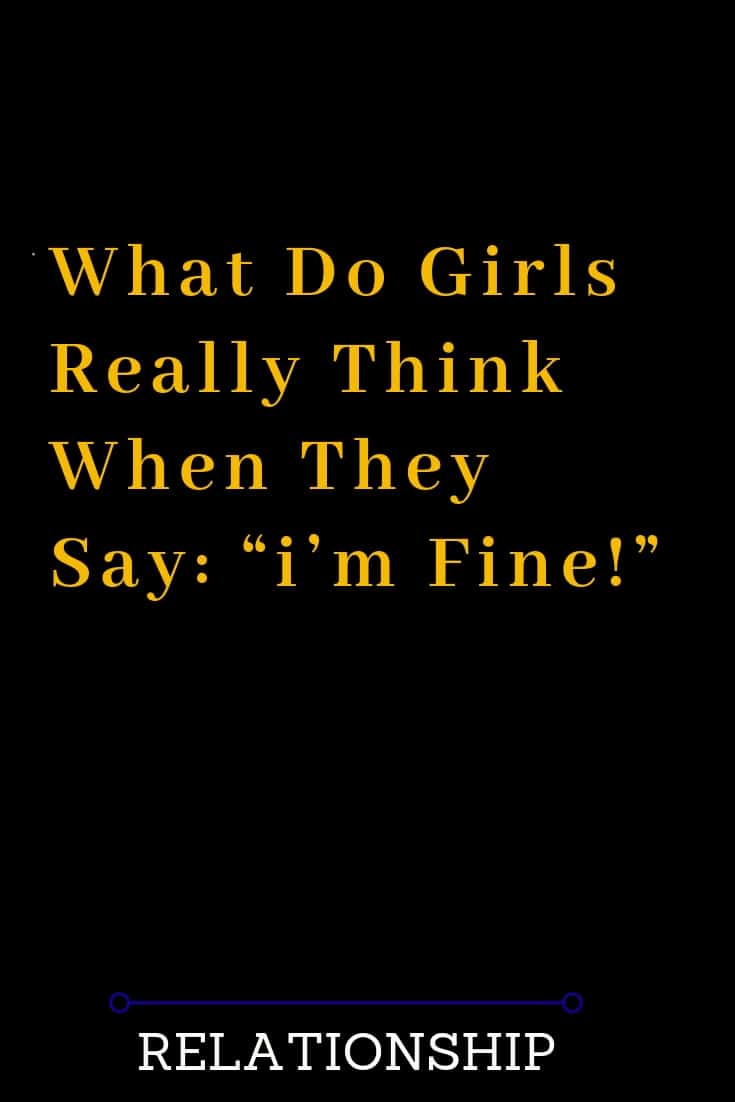 The Ultimate List Of First Date Advice For Men

8 Golden Rules When Being In Love With Anxious Person