Stop yourself from falling for such a beast. Don’t do it; don’t allow yourself to do it. Run as fast as you can and as far as you can.

You should really run. You should run as fast as you can and never look back. Forget you ever met him. Forget about him completely and don’t get your hopes up or set your expectations high because they’ll never come to life.

You’re probably already hooked. You have this feeling like it’s gonna be a love out of this world. But it will only be hell from all the worlds combined.

Notice the narcissistic patterns. Spot the red flags even though they’re hard to notice. Educate yourself and watch if his words are followed by his actions. Be smart in life and never allow yourself to fall for a narcissist. Don’t be one of those naive girls who think it won’t happen to them because that’s exactly what makes you the victim.

When love kicks in, the brain gets kicked out and this is what your narcissist is hoping for.

He will convince you that he’s ‘Prince Charming’. He will do everything in his power to have you fall for him. He will get along with your family, your friends will love him and everyone in this world will be easily convinced he’s god’s gift to you. Nobody will be able to notice the play he arranged until he wants them to.

Once you’re head over heels, the tables will turn. Once you’re emotionally attached to him, once you love him more than you love yourself, once you let yourself stop guarding your heart, he will show you that you couldn’t have made a bigger mistake.

Suddenly, he will no longer be the guy you’ve fallen for. It will still be his face and his body, he’ll still smell the same and he will have the same eye color, but he won’t look at you the same. That’s just it. That’s everything that will remain from the guy you’ve fallen for—only the physical traits. Once his inner beast is unleashed, you’ll be able to see him for who he truly is and I’m afraid you will not like it.

You will the one blamed for everything. Even your family and friends will be convinced that it’s your fault he’s treating you badly. For every failure he experiences in his life, for each bad thing that happened to him in life, only one person will be blamed and only one person will have to endure his anger and that will be you. At the end of the day, there isn’t anything better a narcissist will use as a punching bag than a woman who loves him. Even if he doesn’t use his fist, his words will be equally painful .

All of a sudden, he will be superior to you. All the confidence you had will seem to be gone. You will feel so small next to him. You will feel like you’re helpless, like he could do anything to you and you still wouldn’t have the power to move a finger in protest. Your feelings will paralyze you. All those why questions directed to the women who stayed in abusive relationships will finally be answered.

He will start distancing himself from you. He will constantly withdraw emotionally from you and make you wonder what you did wrong to make his feelings cool off. He will stop responding to your messages, he’ll start hiding things from you and he’ll probably have some other girl next to him, too.

The ugliest part of this story is that it will hurt you. You’ll feel this immense pain from his withdrawal because you will be emotionally attached to this guy. You will feel each and every emotion that he’s unable to feel.

But if you thought the story ends there, you couldn’t be more wrong. He’ll constantly come and go. It will be an on and off thing without your consent. He will pull you back whenever there is something he needs from you. He will make it look like things are getting back to normal, but you should know that’s just one of his many tricks he does to get people do what he wants.

The worst of all is yet to come. You will see all the things he’s doing to you, but you’ll still stay next to him. You will stay.

You won’t be able to walk away because you will convince yourself that things will eventually get back the way they were before, that he’ll eventually be the same boy you’ve fallen for. But that boy, my darling, never existed to begin with.

You will convince yourself that you can change him. You’ll think that loving him at his worst will make him realize your worth and love you back. But honey, that guy is incapable of loving anyone but himself.

The only thing you can do is to nip it all in the bud. Cut him off. Turn your back on him while you still have the time.

Don’t walk into a battle with a narcissistic disorder because you won’t win; you’ll never win that game. If you do, you’ll be feeling the aftermath of narcissistic abuse longer than you can think of.

Darling, you can either save yourself by running away or allow yourself to fall for the cruelest kind of man on this planet and get broken. The choice is yours. But let me tell you one last thing: if I were you, I’d run while I still could. 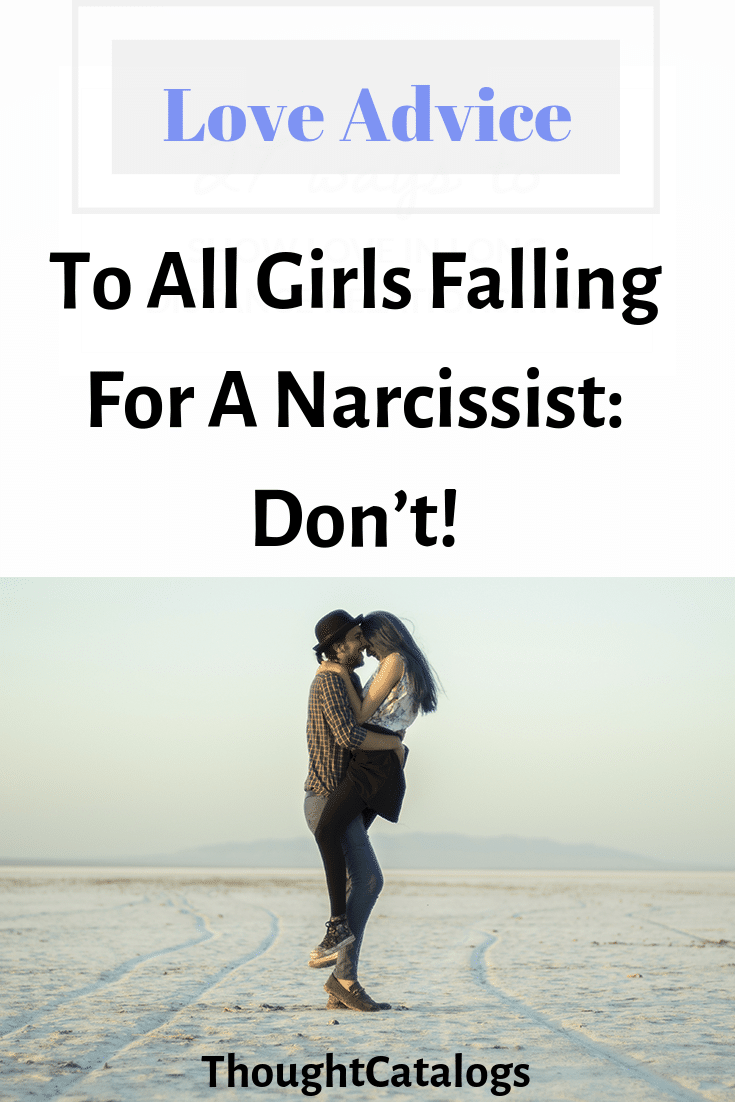 This Is How You’ll Know That He’s The One