What’s in store for every Lunar Year zodiac sign in 2021? Find out what the Metal element, coupled with the hardworking Ox, mean for your all the Chinese zodiac signs in our Year of the Metal Ox horoscopes.

Roll up your sleeves and bring on the sweat equity! The Year of the Ox is a time for hard work and productivity. The Ox is ruled by the planet Saturn, the tough teacher who demands that you pay your dues before reaping rewards. Themes of discipline, determination and diligence will prevail while the Ox rules the skies from February 12, 2021 until February 1, 2022.

There are 5 elements in the Lunar/Chinese Astrology system, and each one rules two years of every decade. 2021 is a Metal year. This element is strategic, sharp and cuts through confusion and chaos. The next year’s emphasis will be on sharpening our tools, creating infrastructures and piercing through the fog so we can get right to the bottom line.

Roll up your sleeves as you bid adieu to the Year of the Metal Rat (2020) and prepare to put in the hard work. While resourceful Rats aren’t afraid to hustle, this shrewd zodiac animal prefers to dart through tunnels and take clever shortcuts, while the Ox insists on protocols and process. The Rat is ruled by lucky Jupiter and has natural good fortune, while Ox years are about paying dues and doing things “by the book.” Luckily, the Rat and Ox are good friends. Put a solid plan behind those visionary ideas and focus on going farther instead of faster.

Bottom Line: Slow down and make a plan before rushing in.

Although some astrologers believe the return of your animal year can bring challenges, for the hardworking and persevering Oxen, 2021 could also be a well-deserved harvest. Your galactic governor, structured Saturn, gives you quiet authority and grounded leadership—and you’ll earn respect in 2021 for walking your talk. If you’ve put in the time and ploughed the fields, you can reap a return on your investment. If you’ve labored behind the scenes, you may finally get the acknowledgment and accolades you’ve earned!

Bottom Line: Double down on your rock-solid work ethic, and reap the returns on your investments.

Rebel, rebel? In 2021, you may feel like you’ve been placed in the time-out chair, and it’s not a seat that Tigers care to warm. The rule-breaking Tiger is easily stifled by the rule-making Ox. Ruled by the side-spinning planet Uranus, the Tiger marches and pounces to its own beat. But hey, would it kill you to do things someone else’s way for a year? (Answer: no!) Your reward for this act of grace and humility? You get to rule the roost in 2022, when the Year of the Tiger begins next February 1. Until then, focus on tying up loose ends and finishing projects. A low-key, productive year isn’t the worst thing.

Bottom Line: Keep your rebellious side in check and experiment with following someone else’s rules for once.

The dreamy, gentle Rabbit can be supported by the steady Ox, who provides a solid foundation for your dreams. But these two animals move at different paces. The Rabbit prefers to race to the finish line and multiply, while the plodding Ox takes one cautious step at a time. Can you learn to adopt a “less is more” mantra or will you feel stuck in the mud? Ruled by imaginative Neptune, the Rabbit might experience a buzzkill by the harsh reality check of an Ox year. But 2021 is also an opportunity to build confidence and resilience, and to see how much farther you can go when you don’t rush!

Bottom Line: Slow down instead of racing to the finish line, and back up your dreams with a solid reality check.

The mystical, magical Dragon has willpower and charm in spades. But you might have to put in some sweat equity in order to manifest your 2021 visions. There are no free lunches on the Ox’s watch, and charisma will only get you so far. But if you combine persuasive powers with the Ox’s tenacity, you’ll be unstoppable. The Dragon is ruled by impatient, aggressive Mars while the Ox is governed by cautious Saturn. Essentially, you’re the gas pedal and the Ox is the brake. Instead of coming on super-strong and scorching the earth, try a more balanced approach and you’ll get what you want without the strife.

Bottom Line: You’ve got the need for speed, but slow and steady (with a heaping helping of humility) will win the 2021 race.

An Ox Year is fortunate for the Snake, because you’re part of a synergistic triangle that includes the Ox, the Rooster and the Snake. You’ll feel the harmony, but your charms won’t win points with the tough-loving Ox. Back up your seduction with substance for the win. In 2021, you may need to adopt a bit more austerity than you like. Governed by aesthetic and epicurean Venus, the sybarite Snake will spare no expense in the name of pleasure. But the stoic, Saturnine Ox is a minimalist who prefers a simple and no-frills lifestyle. Would it hurt you to cut back on costs and cosseting, Snake? For a year, you can do it.

Bottom Line: Enjoy your material pleasures but do so on a modest budget this year.

The Year of the Rat was a struggle for Horses, and that’s on top of an already challenging 2020. Since the Rat is your opposite sign on the Lunar calendar, you may have felt reined in and corralled, which frustrated your freedom-loving sign. It’s a relief to move on to the Ox year, guided by another animal that’s always on the move (albeit at a much slower pace). Sure, you may need to gently trot instead of galloping through 2021. But being back in the saddle feels good at any speed. The question: Can you walk your talk? You’re ruled by quick-thinking and fast-talking Mercury, with a novel idea every five minutes. The Ox, ruled by accountable Saturn, can help you follow through and turn those clever concepts into tangible reality.

Bottom Line: Get back in the saddle and prepare to trot out a few of your big ideas.

Prepare for a year where you feel rather out of character. The Ox is the opposite sign of the Sheep on the Lunar zodiac wheel, making its energy uncomfortable and harsh for you. The gentle, empathic Sheep is ruled by the intuitive moon, with fluctuating moods and deep sensitivity. While you need coddling and cuddling, the hardscrabble Ox is a dyed-in-the-wool stoic, prioritizing hard work and results over feelings. Dry your tears and toughen up—or make sure your support squad stays ready for those moments when you need to express your feelings.

Bottom Line: The Ox is your opposite sign which could make 2021 uncomfortable, but a wonderful opportunity to grow.

The Monkey has nerve and verve to spare, but you won’t get through an Ox year on cleverness alone. Ruled by the Sun, the Monkey has bountiful life force energy, and the resilient Ox lends you the stamina to build a powerful platform. Make hay while those rays shine and channel your energy into a concrete project, backed by a solid plan. While you’re a natural star, this is the year to roll up your sleeves and show your team that you’re willing to do the hard work shoulder to shoulder with them.

Bottom Line: Tap into the stamina of the Ox Year and channel your clever ideas into a concrete project.

It’s a family affair! The Rooster is part of the harmonious triangle that includes the Ox and the Snake, bringing the potential for great fortune this year. Your analytical nature and flair for organization thrive when yoked to productive Ox energy. In 2021, Roosters could rise into roles of responsibility and leadership, managing the many facets of a project and keeping the “farm” under control. Clear the calendar: Your piercing insight and uncanny foresight will be in high demand.

Bottom Line: The Ox Year is epic for the Rooster. Get ready to rise and shine as a natural leader and organizer!

Buzzkill much? The pleasure-loving and pampered pet in every Dog won’t be readily unleashed during the Year of the Ox. Ruled by bon vivant Venus, Dogs are natural networkers who thrive by mixing work and play. But the stern, sober and Saturnine Ox doesn’t take kindly to fooling around on the job. In 2021, socializing is for after hours and your penchant for luxury could be curtailed by the austere Ox’s modest budget. Learn to live more with less and at the very least, you’ll end the year with a few more bucks in the bank.

Bottom Line: The austere, workaholic Ox energy can cramp your social butterfly style—but a little self-control could help you save your pennies.

The Pig may have a front-facing rep as hedonistic, even greedy, but newsflash: that mud has been slung unfairly! Ruled by intense and transformational Pluto, the Boar can also be, well, a bit of a “bore,” just like the Ox. Fine, that might be a stretch, but both the Ox and the Pig can be among the most committed (dare we say obsessive?) when they set their minds to a goal. The Pig tends toward extremes of working hard and playing hard. In the Year of the Ox, that ratio could easily tip out of balance. Make a concerted effort to take rejuvenating breaks and have fun. Refill your tank so you don’t burn out! 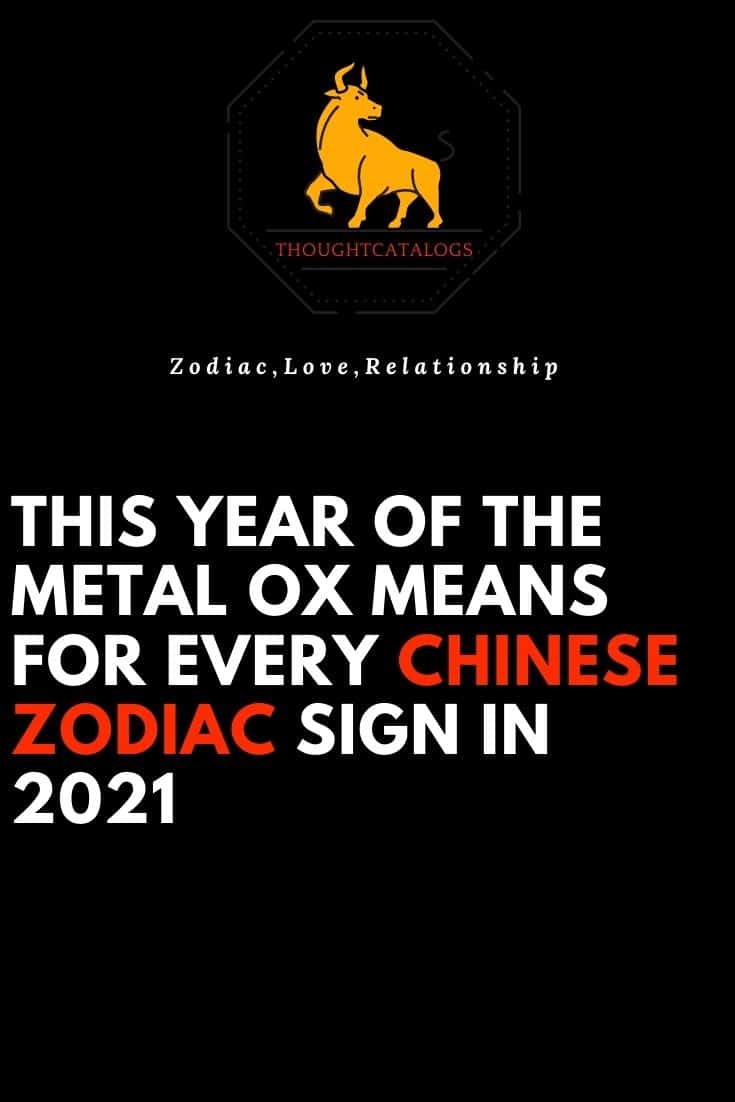 Aries “A person can say they are sorry, but if they still don’t change, they are playing you.” You’ve been through the same shit so many...

Well, conjunction is merely the meeting of two piles of earth within the very same indication, and as we start Sagittarius season it indicates...

Who Are Luckiest In Love On Tuesday, June 7, 2022 Based On Your Zodiac Signs

With the Moon trine Venus and a Fifty Percent Moon in Virgo, we must be seeing some pleased people feeling great concerning their romantic...

If you want it, go after it. On February 28th, the Sun in Pisces will s*xtile Mars in Taurus, amplifying our energy and helping us take...

15 Signs You Are In A So-called Karmic Relationship

At least once in our lifetime, we have been in a romantic relationship that is known as a karmic relationship. Most people tend to...
𝐓𝐡𝐞 𝐭𝐡𝐨𝐮𝐠𝐡𝐭 𝐜𝐚𝐭𝐚𝐥𝐨𝐠𝐬 is an Educational & Entertainment Platform theme. Our Team Publishes 100+ Content On Weekend/Monthly. We will motivate the needs of any person & make them inspire instantly You, Will, admit Once You Begin Your Journey With Us. The Thought Catalogs platform is a perfect choice.
© Copyright © 2022 - All Rights Reserved | TheThoughtCatalogs.