I’m really tired of stumbling upon emotionally immature men a.k.a. boys in the dating world. I used to wonder: “Aren’t there any real men left? And, if they are, where have they all gone?”

Well, maybe it was my fault I couldn’t find them because there are plenty of them out there, waiting for us to notice them—it’s just we somehow miss them.

What happens is that you get cold feet because you’re scared you’re going to end up alone and then you settle for boys who will never be able to give you what you want and need.

But, fuck that! Why should you settle for less than you deserve? Why should you settle for an emotionally immature child when you can have the real deal—a grown-ass man who is better for you in every way possible? He is better in bed, he is more reliable, he is mature and he looks for a normal and responsible woman to spend the rest of his life with.

Don’t even think of dating a boy and trying to change him into a man. That is never going to happen. If he doesn’t get his shit together by himself, you won’t be able to do that instead of him.

A man does things because he loves doing them and he never lacks motivation. A boy, on the other hand, thinks getting a job in McDonald’s is a score.

A man will always make you strive for more. He will make you a better person. He will challenge you in every possible way and that will have a positive outcome for you. A boy will make you feel like you’re not good enough by making himself better than he will ever be.

A boy will be threatened by your accomplishments and a man will be proud of you and show you off every chance he gets.

A boy will want to keep you all for yourself and a man will let you have your own time and free space, but he’ll be there to protect you when you need it.

A boy only thinks of himself and his own pleasure. A man won’t be satisfied until he makes you happy. How To Make “Winning Your Love” A Sexy Challenge No Man Can Resist

When he has a problem, a man will approach you, speak his mind and talk to you in a calm and responsible manner, while a boy will agree with everything you have to say just to avoid arguments—and he will still do things his way.

A man will treat you like a priority while a boy will always put you at the bottom of his list.

A boy is afraid of challenging you because deep inside, he knows you are better than him and he doesn’t deserve you. That’s why he makes you feel less worthy because he’s afraid you will realize you deserve better and leave.

A man will show interest in your life because he really cares and is genuinely interested in what you do. A boy will fake interest—usually until he gets something out of it.

A real man knows your relationship is a two-way street and it cannot work without the compromise which only grown-up and mature people can understand—completely opposite of what a boy thinks.

A boy makes excuses when he screws up and never owns up to his mistakes. A man always admits he was wrong and immediately searches for a plan to make amends.

A boy is superficial and he gets turned on by beauty and physical traits. A man knows you are so much more than that and he appreciates the things you do and how you act.

A real man takes care of his body and mind. He knows that if you want to feel good, you have to be healthy and take care of yourself. Boys never get this.

Boys think they know everything and no one can teach them anything. Real men accept the fact there is always something to learn to improve yourself, and that’s why they are constantly growing and becoming better.

A man will hang out with your friends even if he doesn’t like them or has something better to do. How To Make “Winning Your Love” A Sexy Challenge No Man Can Resist

He will do it out of respect for you, while a boy won’t even try and he will blow off the invitation right at the start.

A boy is worried what his friends will think of you. A man doesn’t give a fuck what others think of you as long as he believes you are worthy of his attention and love. 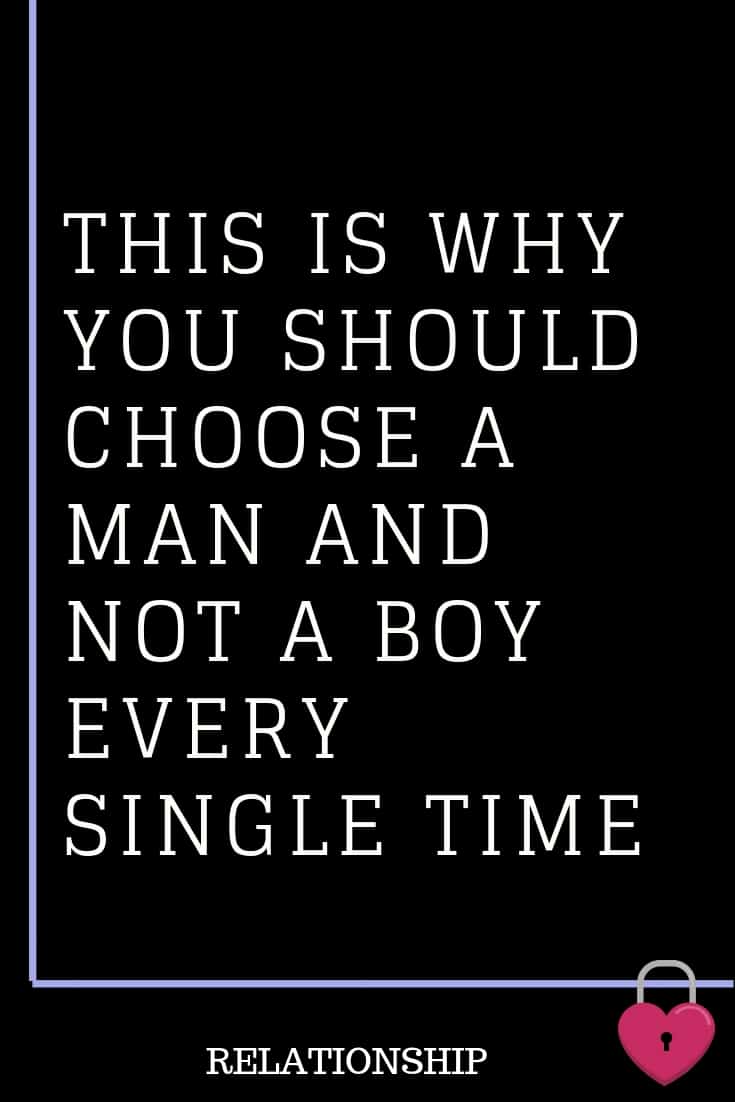