You don’t think life can function without you properly. You’re always go, go, go even when you’re not feeling like yourself. It often causes you to feel overwhelmed and stressed about the tasks you struggle to accomplish. Give yourself a break, life will continue to move forward without you. You don’t have to always be the superhero.

You fear messing up too much; you stress yourself out about missing deadlines or not making it to a meeting on time. You fear making people upset and you make yourself sick over people being mad at you or not thinking you’re good enough. Things will work out, just trust. You often make the problems much worse than they actually are in your head.

You let the little things get to you and it causes you a lot of stress. You would best benefit by mind calming activities to stop you from screaming at the person who pulled out in front of you on the road or from thinking someone is stupid for pronouncing a word wrong.

Your anxiety goes through the roof when you feel unsafe. Walking alone at night makes your heart feel like it’s in your stomach. But you also can’t take criticism or people staring at you, it all makes you extremely anxious. Don’t repress your emotions, breathe and tell people what’s on your mind. You need reassurance to feel a little better.

Anytime you’re not in control of a situation you fill with anxiety. You need to know that things will work out even if you’re not constantly behind the wheel controlling every decision you’re involved in. Sometimes you just need to cut yourself a break from worrying and just follow along to someone else’s plan.

Your trigger is over thinking. You think way too much and you’re your own worst nightmare when it comes to causing your anxiety. You overthink most decisions and freak yourself out, but once you start doing it you are okay. You need to trust more that things will be okay, write things down and don’t always assume the worst.

You like things fair, anything you feel is unfair completely stresses you out. You tend to overthink the pros and cons of situations instead of acting in the moment, you need to breathe and just respond in the moment, instead of sitting on things for hours rushing through all the different scenarios in your mind.

Not having enough privacy or quiet makes you anxious. You need your space and you hate it when people don’t respect that, it makes you feel tense and nervous. You just want everyone to respect your boundaries.

Conforming to society stresses you out the most. You hate being told how to behave, dress or act. You don’t like deadlines or sitting in traffic. You can become extremely restless and it causes you a lot of anxiety.

You are the root of your anxiety. You put way too much pressure on yourself and set strict deadlines for yourself. You feel frustrated if you don’t meet them. Stop thinking about the “what ifs” and live in the now.

If things aren’t your way you get anxiety over it. You try to clarify things and you get stressed by time, easily. You try to do too much at once, you need to slow down and relax. Sometimes things won’t go your way, but that doesn’t mean it’s wrong or isn’t going to work out.

Feeling overexposes makes you anxious. You hate public speaking and it makes you stressed, just like big crowds and too many people in your area. You can make yourself sick over the invasion of personal space, but it will all be okay. Just breathe through it. 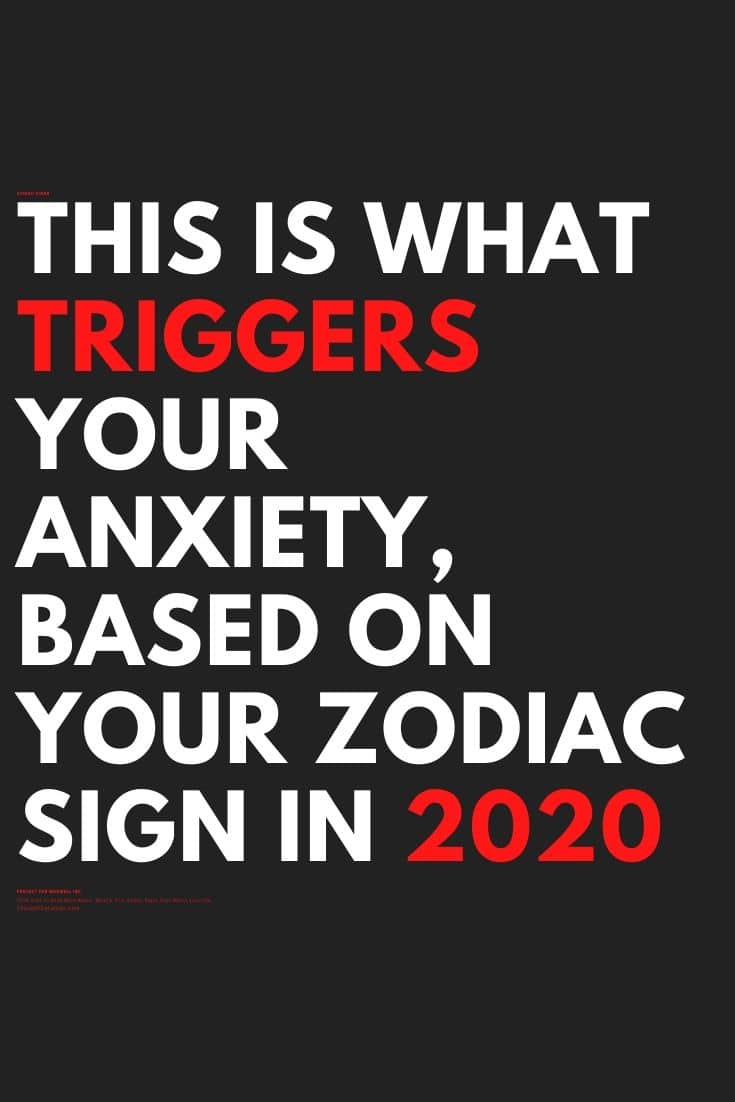 Friday is a day when you should not cheat or lie, no matter what your real intentions are (sincere or not, honest or not)....

Throughout April, there are mosting likely to be Zodiac signs which are going to be down or additionally out, however not each of them...

Click Here To Discover What Men Secretly Want, But They Could Never Tell You.   2019 horoscope already suggests that 2019 is set to be a...

Recently, I went out for drinks. I met someone at the bar, and after we got to talking we discovered some absolutely crazy parallels...

1. Aquarius Okay pay attention, part of the element you started squashing on the Aquarius is because of the reality that they're divided as well...
𝐓𝐡𝐞 𝐭𝐡𝐨𝐮𝐠𝐡𝐭 𝐜𝐚𝐭𝐚𝐥𝐨𝐠𝐬 is an Educational & Entertainment Platform theme. Our Team Publishes 100+ Content On Weekend/Monthly. We will motivate the needs of any person & make them inspire instantly You, Will, admit Once You Begin Your Journey With Us. The Thought Catalogs platform is a perfect choice.
© Copyright © 2022 - All Rights Reserved | TheThoughtCatalogs.